How a Government Shutdown Could Affect Small Businesses

By Diana Ransom April 7, 2011
Opinions expressed by Entrepreneur contributors are their own.
You're reading Entrepreneur United States, an international franchise of Entrepreneur Media. 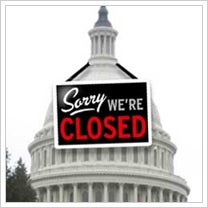 Even after a late-night meeting with President Obama, lawmakers are still unable to reach an agreement on a 2011 budget -- making the threat of a government shutdown a real possibility.

"A shutdown could have real effects on everyday Americans," said President Obama yesterday evening after meeting with Speaker of the House John Boehner (R., Ohio) and Senate Majority Leader, Harry Reid (D., Nevada). "That means that small business owners who are counting on that loan to open their business, to make payroll, to expand, suddenly they can't do it."

"About 95% of my business is from military spouses," says Lopez, a military spouse based in Fort Stewart, Ga., who operates as an independent consultant for Scentsy, a direct candle seller. She believes her business will suffer if there's a shutdown, particularly because her clientele relies on the military.

Although Defense Secretary Robert Gates announced that if a shutdown took place, soldiers and other military personnel would receive payment eventually, they wouldn't get a check during the actual shutdown. They'd receive back-pay, he said while speaking to a group of 200 soldiers in Baghdad.

"Missing even half of a paycheck is going to seriously hurt many of us financially," Lopez says.

But even business owners who don't mainly cater to the military will get pinched if a shutdown happens. Small business owners awaiting approval of new loans would be put on hold, said President Obama in a media briefing earlier this week regarding the ongoing budget negotiations. He added that because the government wouldn’t have funds available to support the loan guarantee on 7(a) and 504 loans, lenders and the Small Business Administration would not be able to approve any new loans through those programs. The exceptions are Disaster Assistance Loans, which will not be affected, according to SBA spokeswoman Hayley Meadvin.

If a budget agreement isn't reached by midnight on Friday, SBA counseling and technical assistance programs that do not have other funding sources or are co-located in a federal facility may also be temporarily shut down, according to knowledgeable government sources that agreed only to speak on background.

Then there's also the question of government contracts. With government's purchasing operations shut down, small businesses would not be able to compete for new contracts or perform new work on existing time and material contracts, said those sources.

UPDATED:
SBA Administrator Karen Mills says that in the event of a shutdown, the SBA will continue to honor its guarantee on existing small-business loans, which are now in the hands of banks. She also confirmed that those who are in the queue and ready to get their loan approval will go into a "waiting mode" until a budget agreement is reached. "We are very, very concerned about the impact that that will have on our constituents: both our employees and small business owners," Mills says.

Small business owners, what's your biggest concern about a possible government shutdown? Leave a comment and let us know.