By Mikal E. Belicove August 16, 2011
Opinions expressed by Entrepreneur contributors are their own.
You're reading Entrepreneur United States, an international franchise of Entrepreneur Media. 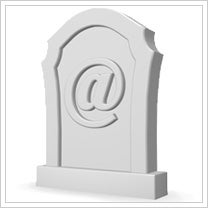 Some social media consultants have begun eulogizing email. They suggest employers cast out what they see as a dying communications tool, and, instead, encourage employees to use whatever social media channel they feel most comfortable with for a given communication.

This assessment is premature. As an advocate of using social-media utilities and platforms for business-related purposes, I'm certainly not afraid of new communication platforms or devices. But endorsing tweets for example over email messages for group or one-to-one business correspondence is shortsighted. And if email is dead or dying, that certainly comes as news to me. Especially since I received word about this blog post through -- you guessed it -- email.

First, spouting absolutes like "email is dying" can be dangerous because it assumes that what's good for one demographic must be good for all. Second, email -- which can be used to recruit followers and fans and accomplish much more -- isn't anywhere near being broken or dead.

In a recent piece, Jacob Kramer-Duffield, a social-media consultant in Brooklyn, N.Y., recalls a November 2010 Pew Internet & American Life Project commentary by Amanda Lenhart that cites a previous Pew study showing that only 11 percent of teens in 2009 relied on email to communicate with their friends, thus labeling email as a "dying medium" among the young.

The latest Pew data on email usage suggests a different story, however. Released just last week, the new Pew survey affirms email remains tied with search as the most popular online activity, with more than 90 percent of Internet users saying they use email and more than 61 percent saying they do so on a daily basis.

The numbers are even higher for the youngest adults. The Pew study shows that 94 percent of those between the ages of 18 and 29 send or read email, with 64 percent doing so on a typical day.

So what does this mean for you?

Just because some young people prefer to text and tweet rather than send emails doesn't mean email is dying. And it certainly doesn't mean we have to rethink communication platforms. The fact is, there's simply less of a reason for younger people to have email addresses, so obviously they're not going to be using email as much as adults do. Just give them time, though. Even the youth will come around.

What is the best communications tool you've found for reaching customers? Let us know in the comments section.

Forget the "New Normal." There's No Normal in Marketing.

Safle’s CEO: Never Under Any Circumstances Store Your Assets With A Custodial Wallet