By Michelle Goodman June 6, 2013
Opinions expressed by Entrepreneur contributors are their own.

Genifer Murray's path to the pot industry was an unlikely one. After graduating with a degree in microbiology, she spent two less-than-fulfilling decades working in corporate sales. But three years ago, a random conversation in a bar about medical marijuana testing awakened her inner scientist.

"It's literally a napkin story," Murray says. She spent the weekend brushing up on Colorado's cannabis laws and researching potency-testing methods and equipment. Come Monday, she was making plans to open CannLabs, the medical marijuana testing lab she now runs in Denver.

Today CannLabs operates in a 1,000-squarefoot space, serving many of Colorado's leading dispensaries and manufacturers of THC-infused beverages, tinctures and baked goods. The company's growth is steady, with sales on track to double in 2013. Plans for a second lab are in the works. "I took every penny I had and put it in this," Murray says. "It really has given me purpose in my life." 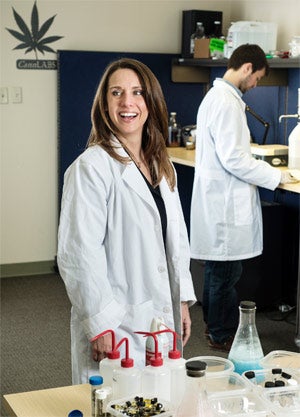 Brendan Kennedy came to the cannabis industry at the same time as Murray, but from the other end of the startup spectrum: Silicon Valley banking. When a venture capital pitch from a potential client in the medical cannabis world sparked his interest, he began meeting with hundreds of pot activists and entrepreneurs. In 2011, Kennedy and pals Michael Blue and Christian Groh formed Privateer Holdings, a Seattle-based private equity firm for the legal marijuana sector that has raised $5 million (out of a goal of $7 million) from more than 20 investors. That December, Privateer made its first acquisition: Leafly, a website where users of medical cannabis can find product reviews and ratings by strain and effects and dispensaries by location.

Leafly didn't have a whiff of revenue when Privateer acquired it. Now, Kennedy says, "we're signing up four to six new clients a day," and traffic is growing by 20 percent per month. In December alone, the site had 2 million visitors, and Leafly's mobile app had 50,000 downloads. The company's projected sales for 2013 are $3 million to $4 million.

Welcome to the green rush. Independent financial news and data firm See Change Stratgeegy estimates that the U.S. medical marijuana market is worth $1.7 billion and could reach $8.9 billion by 2016. That's not just dispensaries, growers and producers of edible marijuana, but also the testing labs, equipment suppliers, security companies, insurance firms, attorneys, accountants and other consultants that serve them.

"This is the next great American industry," says Troy Dayton, CEO of San Francisco-based The ArcView Group, which runs an angel investor network for the ancillary cannabis industry. "Marijuana prohibition is a house of cards, and the first two cards have just been pulled."

Get Briefed
Wondering what it takes to make it in this new business? These resources can help light the way.

National Marijuana business Conference. an annual trade show put on by Medical Marijuana Business Daily where 'treps can learn from and network with industry bigwigs. this year's event is nov. 7 and 8 in seattle.

Marijuana Policy Project. the latest and greatest news on federal and state policies for medical and recreational marijuana.

Americans for Safe Access. a state-by-state directory that provides an easy way to learn about medical marijuana rules and regulations in your region.

Norml. A nonprofit group that has been working for more than 40 years to legalize marijuana in the u.s.

But opportunity doesn't necessarily lead to simplicity. Aside from the everevolving legal and regulatory landscape, there's the skittishness of banks, landlords and neighboring businesses to contend with. Here's what you need to know about getting into the green game.

Reduce RisksTo keep your nose clean in this business, due diligence and compliance are essential. Having a comprehensive understanding of state, local and federal cannabis laws is a must, says Brian Vicente, attorney and founder of Vicente Sederberg, a law firm based in Denver that serves the medical marijuana community.

"If you follow your state and local laws to a T, you're really minimizing your risk," he says. That means complying with the necessary licenses, permits and corporate structure dictated by your geographic region. Same goes for paying city, state and federal taxes--even though marijuana dispensaries and collectives aren't entitled to the same federal tax deductions as most other U.S. businesses.

If you really want to lessen your risks, "the ancillary businesses are the way to go," advises Chris Walsh, editor of Medical Marijuana Business Daily,an online publication for legal, financial and industry news. Although accountants, software developers and hydroponics stores serving the legal weed sector aren't immune to federal crack downs, their legal risk is much lower than for dispensaries and growers.

To better educate yourself, CannLabs' Murray suggests talking to as many businesses in the THC trenches as you can, even if you're a seasoned entrepreneur. "I know people say, 'I've done food,' or 'I've done a clothing store or retail,'" she explains. "But it doesn't matter. You haven't done marijuana. This is not a normal business. In the end, you could be facing federal prosecution."

Expect Banking Snags
When you work with weed, securing basic professional services that other entrepreneurs take for granted--bank accounts and credit cards, for example--can be tricky. Traditional bank financing is simply not an option. "Everything is harder in this industry," Privateer's Kennedy says. "And it's not just three times as hard. It's exponentially more difficult."

Determined to remain honest about their business, Kennedy and his partners had to pitch themselves to multiple banks before finding one that would give them an account. "Two weeks later, we would get this embarrassed, sheepish phone call where the VP would tell us they weren't going to take us on as a client," Kennedy says. "That happened eight times before we found the bank we're currently with." (The same thing happened when Privateer searched for a law firm.)

Still regarded as drug traffickers by the federal government, dispensaries and growers have it even tougher. "If you're going to be a dispensary, expect to be all-cash for the foreseeable future," Walsh says. Those that do get bank accounts--primarily by fudging the truth about their business models--often have them shut down once the bank catches wind of what they're up to.

Ancillary businesses feel the effects of this cash-based market, too. Take Canna Security America (CSA), a Denver-based security company for medical marijuana dispensaries, growers and other businesses. "Usually we do get paid in cash," says founder Daniel C. Williams, whose security systems range from $1,500 to more than $40,000. When that happens, he says, "I will stop whatever I'm doing and take that money straight to the bank."

Because so much of his revenue is paid in cash, Williams is vigilant about keeping airtight accounting records. "One of the biggest scares for me as a business owner is making sure that every dollar is accounted for," he says. "It's just one of the things we have to deal with in order to do well and not worry about sleeping at night."

Find a Friendly Landlord
Setting up a physical shop is another hurdle. "The single hardest part of the business in any state that has [legalized] this is finding a location," says Adam Bierman, president of The MedMen, a company that offers classes, consulting and turnkey solutions to pot dispensaries nationwide. Besides worrying about running afoul of the law, landlords--particularly those managing multiunit properties--tend to worry about marijuana businesses scaring off less open-minded tenants, he says.

This is not a normal business. In the end, you could be facing federal prosecution.--Genifer Murray, CannLabs

CannLabs' Murray knows this all too well. When she signed a lease at a former location, she warned the landlord about the odor of the products she tests; nevertheless, she soon started getting flak from him about the smell. Three months into the lease, she voluntarily moved out. "Why be in a place where somebody doesn't want you?" she asks.

Even basic utilities can be a challenge. For Murray, the rub was in finding a chemical-waste-removal service. "I had to call 10 companies before we could find someone who would even take it," Murray says. "People are scared--they don't want to touch it because it's federally illegal. So now I have to pay for new 5-gallon drums every time so they can drive it to Utah and blow it up."

Charm the Locals
Being a good neighbor is crucial for cannabis entrepreneurs. Tim Smale, founder of remedy Compassion Center, a Maine dispensary, began being neighborly long before he opened his doors in May 2011. To get the keys to the kingdom,he and his partners first met with the police chief, local planning board and other municipal leaders to gauge their level of support and acceptance. "We put together a 125-page security plan to show them who we were and what we to do," Smale says. "That allowed us to have access to the town."

But being a model citizen doesn't stop with wooing the city council. Once the business is up and running, you have to be friendly with neighbors. This includes getting a killer ventilation system to diffuse odors if you handle pot directly, and keeping your storefront clean--in general, rising above the tie-dyed clichés of pot culture. "We don't allow any of our employees to use marijuana on the job," says CSA's Williams. "I don't think that's endorsing the business. It's an immediately fireable offense."

Making donations to local causes and charities helps, too. Smale makes it a practice to contribute to local police and firefighter fundraisers, as well as to the YMCA and The Salvation Army. "You have to have a great relationship with the community," he says. "If they're not receptive, move on and find another community."

Stay FlexibleFor Privateer's Kennedy, one of the biggest surprises of working in the cannabis industry was how the various branches of government can change their tune on legalization overnight. He recalls how the DEA sent shutdown letters to more than 20 dispensaries in Seattle last summer, but that in December President Obama said the federal government had bigger fish to fry than pursuing recreational users in states that have legalized marijuana.

"Every day it's two steps forward and one step back," Kennedy says. "I was not prepared for the daily roller coaster."Medical Marijuana Business Daily's Walsh concurs. "You've got to live day by day in this business," he says. "If you are not flexible and you cannot adapt, you are done."

But then there's the other side to working in an industry that's in flux: "The fun part for me is being able to serve as an agent of change," Kennedy says. "I've never had an opportunity to create a business where a successful business and a successful brand can serve as a form of political activism."

Cannabis Chew? Yep, It's a Thing And It Just Might Be Revolutionary