Meet the Franchisor Launching a Fundraising Platform for Potential Franchisees 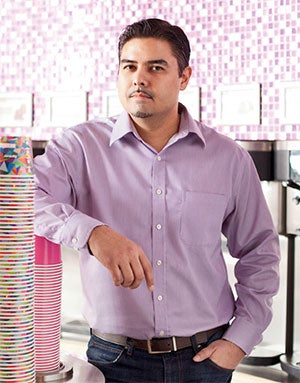 When he opened Forever Yogurt, the first self-serve yogurt franchise in the Chicago area, Mandy Calara realized that a lot of enthusiastic, would-be business owners were being left in the dust because they didn't meet strict net-worth requirements.

That's why Calara launched CrowdFranchise, an online crowdfunding platform that lets the friends, family and community of potential franchisees become investors. SEC rules allowing for passive investing through crowdfunding are expected to go into effect this year; until then, Calara is operating under existing rules to help franchisees pull enough cash together to buy the franchise of their dreams, while enabling communities to help dictate the kinds of businesses that open in their neighborhoods. He's also working on an associated incubator for brands seeking to expand, in conjunction with Kevin Harrington.

We asked him to explain.

How does CrowdFranchise work?
Our intention is for there to be a lead investor and an operating manager for the store. When Title III of the JOBS Act is implemented later this year, we envision someone really passionate about a brand will start their own capital raise for a certain location or neighborhood, and it will be partially their responsibility to get enthusiasm from people they know and the community to pledge support for the store. They don't have to raise 100 percent of the funds from the community-- just enough to let them get a loan for the balance. Investors can be passive or silent partners, or they can be more involved. It's however the lead investor wants to arrange things.

The way things are set up now, investors are active partners. We'll give them the tools to make group decisions and vote, weighted on the amount of their equity. Right now all stores are required to hire an operating manager for day-to-day stuff, and the investors all chime in when a significant decision needs to be made.

Sounds good, but has it worked?
Yes. We just opened our first store through CrowdFranchise. It was a Forever Yogurt corporate store in Wicker Park that we sold to the community. There's a lot of competition opening in the area, and I wanted to find a way to get the most interest and community support from the neighborhood. The listing went on CrowdFranchise on Dec. 13, 2013, and it took only 66 days to gain all the capital. A lot of people invested $1,000 to $5,000; there were investments of $20,000 and $25,000. Then someone came in and invested more than $400,000 and put it over the top. The store was actually overfunded.

I'm glad we were able to close our first funding with a Forever Yogurt location. It allowed us to live through this and see some of the issues and agreements that need to be put in place.

What's with the incubator?
We signed a deal with Kevin Harrington, one of the judges on the TV show Shark Tank, in March. He's going to be an investor and kind of the face of the company. The incubator program is called Velocity, and we'll scout out mom-and-pop businesses that are doing well or have a lot of action on Yelp. Then we'll approach them to see if they'd like to try to expand their project nationally. We'll use CrowdFranchise to gauge support.

What type of franchise brands would be interested in this concept?
I think our initial target is emerging franchisors and startups with fewer than 20 units. They can put up a "community owned" sticker and might expect to do better. Once we get them onboard and show our value, then bigger brands might get interested. It's like anything; initially when something is new and not understood it will be difficult for larger, more successful brands that are complacent with their sales to get onboard.

5 Sales and Marketing SaaS Solutions That Will Empower Franchise Owners

5 Boxes to Check Before Expanding Your Franchise Outside the U.S.

Travel Agents Saved the Day When the Pandemic Caused Chaos. Now, Travelers Need Them More Than Ever.