EcoHelmet could be purchased for less than $5 at bike rental locations and recycled after use.

Bike-sharing schemes are cropping up in major cities across the globe, encouraging physical exercise and reducing the carbon footprint. But carrying a helmet around with you in the event that you need to hop on a bike is not exactly convenient.

EcoHelmet, which just won the 2016 James Dyson Award, is a safety accessory that folds flat for storage in a purse or backpack. Just place it on your head, pull down the straps and clip; the stretchy material conforms to fit most noggins. 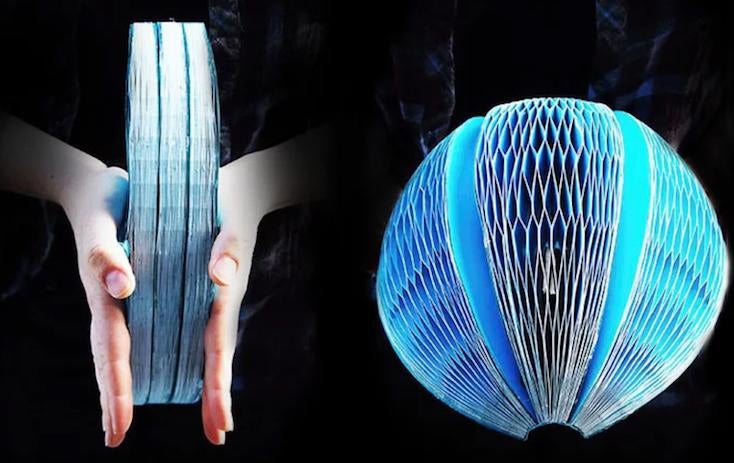 The simplistic headgear boasts a sophisticated radial honeycomb pattern, which promises protection as effective as a traditional polystyrene helmet. Its three-piece cell structure, according to Shiffer, distributes impact evenly around the head, rather than allowing it to concentrate in one place and cause a concussion.

Plus, it can double as a party decoration when you're finished.

"I was lucky enough to be studying at Royal College of Art and the Imperial College of London for a semester, and was granted access to Imperial's crash lab," Shiffer, a recent graduate of New York's Pratt Institute of Design, said in a statement. "They had a European standard helmet crash setup that allowed me to gather enough data on EcoHelmet's proprietary honeycomb configuration to know it was viable and worth developing."

The helmet is expected to launch in 2017; Shiffer envisions vending machines that dispense the product with a bike rental, as well as recycling bins for post-ride disposal. Each unit could be sold for less than $5.

"EcoHelmet solves an obvious problem in an incredibly elegant way," James Dyson said. "But its simplicity belies an impressive amount of research and development."

Shiffer snagged the top prize of $45,000 to help develop her innovation; the contest's two runners up -- Smart Contact Lens Platform and Respia -- will each be awarded $7,500.

Want to Build a Great Business? Find the Right People.

Investment Bias: Get Rid of the Pesky Impediment to Success