Hurdles and Hopes in the Development, Production and Distribution of Cannabis

The opening of a vast, albeit disjointed, North American cannabis market is driving investment in R&D and production.

By Andre Bourque March 31, 2017
Opinions expressed by Entrepreneur contributors are their own.

Attitudes and laws are changing in drastic ways these days. One area where this is particularly evident is in North America’s growing acceptance of the use of medicinal and recreational marijuana.

Canada has been at the forefront of the legalization of marijuana, but even the United States is getting involved. Medical marijuana, or cannabis used to cure or alleviate the symptoms of medical conditions like glaucoma, is already legal in more than half of the U.S. states, and for far more than half the population. Recently, recreational marijuana use has also been legalized in eight U.S. states as well.

Related: How to Plant the Seeds of Success in the New Cannabis Economy

The medical properties of cannabis are often dismissed by U.S. authorities. White House Press Secretary Sean Spicer alleged a correlation between cannabis use and opioid addiction when, in fact, a recent University of Michigan study found that cannabinoid intake reduces the use of opioids (on average) by 64 percent. Unlike opioids, there has never been a single confirmed death (warning: panda bears) from THC or cannabis whether used recreationally or for health benefits.

Economics of it all

What is still unclear is the economic ramifications of the sale of marijuana. The legal production and sale of marijuana has the potential to evolve into a major industry that could rival alcohol or tobacco giants. Nothing is set in stone, but the legal and economic framework is being created to govern how this budding industry grows. It is essential for those eager to get in on the ground floor of this emerging market to have a strategic plan.

It is important to have a solid understanding of any industry before investing in it, and the marijuana industry is no exception. There are three main areas to pay attention to when it comes to the economics of the industry: development, production and distribution.

Extensive effort and resources are placed to hone the cannabis plant’s genetics. It’s fundamentally important to distinguish medical from recreational markets -- they are intersecting but distinct markets. Meeting with Michael Masterman-Smith, PhD, cancer research biologist and pharmacologist, and founder of CA Labs, at the Emerald Exchange, I learned the genetics driving the recreational market are typically THC potency and "bag appeal," meaning the look, smell and feel of the mature flowers.

"The genetics driving the medicinal market are for ‘full spectrum’ appeal. It involve a reiterative process of cultivation and lab testing to select for a wide range of cannabinoids including THC, CBD and other therapeutic cannabinoids and terpenes,” he describes. 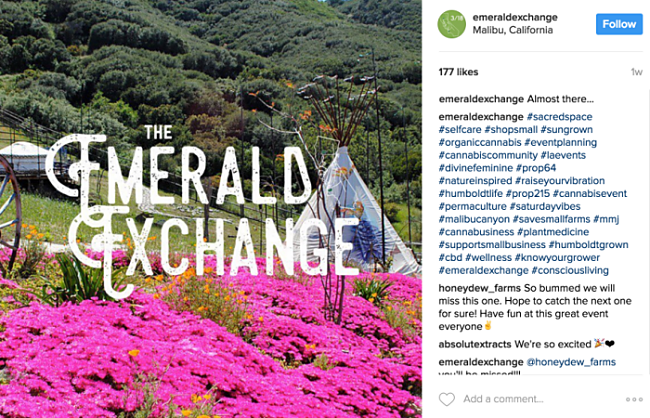 One important fact to consider is that going forward only 10 percent of cannabis produced will be sold as dried buds, the raw product that commonly comes to mind when one thinks of the plant. The remaining 90 percent of cannabis produced will go on to be processed and extracted. The extraction of the unique composition of plants is what leads to a “plant in a pill” or creates a unique sensory experience on the user of medicinal and recreational cannabis. In the United States, already 20-60 percent of sales in marijuana dispensaries come from concentrated forms of cannabis.

“Cannabis genetics play a major role in the end product and patient experience. Genetics over the years have mostly become hybridized, blurring the lines between indica and sativa, which has made the job of phenotyping (finding the best plants) that much more important,” explains Bin Huang, CEO of Emerald Health Therapeutics. "Finding the best genetics leads you to the best strains, resulting in high THC or CBD profiles, strong plants (resistant to contaminates), and high yields -- meaning higher sales prices and margins."

Today, there are more than 100 known cannabinoids, THC and CBD being the most common. Having the ability to isolate unique cannabinoids and terpenoids means the development of proprietary and defensible IP, oriented around specific compounds of the cannabis plant. While compounds that occur naturally cannot be directly patented, formulations, processes and ratios can.

"With many terpenoids acting synergistically with cannabinoids to accentuate effects this an area of significant interest and speculation," Masterman-Smith continues. "If you look at the growth of the industry in terms of medical use, potentially high value therapeutic formulations are being tested ad hoc in real time.  As one cancer patient’s husband seeking cannabinoid therapy conveyed the urgency to us, 'We don’t have time for a clinical trial.'"

One factor to consider concerning the production of marijuana is that there is relatively little data and experience available behind the burgeoning cannabis industry. This can make it difficult to know if you are sufficiently capitalized when you are looking to enter the legal marijuana business.

A licensed producer can generate upwards of 60 percent margins on dried cannabis products, potentially significantly more with extracts, and even more if proprietary products with unique strains are developed. “To enter into the market on a small scale one should have at least $10 million worth of capital, and to be one of the dominant players in the space, one should have available or access to at least $50 million,” says Huang.

Most of the unexpected expenses come from regulatory and bureaucratic hurdles from compliance with government requirements and potential retail opportunities for the licensed producers. This leads us to the next phase, distribution.

Related: Legal Advice for Cannabis Startups: First, Invest. Then, Stay out of Jail.

Logistical hurdles include the ability to ship product direct to patients in a timely and efficient manner especially if the facility is in a more remote location, as many locations are at this time. Patient outcomes are dependent on the availability and consistency of product so it is important to monitor inventory and manage the number of patients effectively in order to avoid shortages.

The examination of the economic concerns behind the marijuana industry comes at a crucial time, as it looks as though Canada is poised to move forward with legislation to legalize and regulate the recreational use of marijuana very soon. Such a move would place Canada at the forefront of legal marijuana use worldwide, as it would join Uruguay as the only other major Western country to fully legalize the drug.

As regulatory laws evolve and change the future legalization of the medicinal and recreational market, one thing is clear: This is certainly a compelling (and potentially lucrative) time to get involved with the legal marijuana business.

Cannabis Sales to Cause Fireworks on 4th of July