The economic and cultural interests urging and resisting legalization are vividly displayed in Arizona.

By Andre Bourque August 24, 2017
Opinions expressed by Entrepreneur contributors are their own.

It’s not easy being green -- in Arizona. Weed advocates walk a very thin line. A citizen’s referendum legalizing and decriminalizing adult-use marijuana failed in 2016, possible because of the massive financial contribution by a pharmaceutical company with a special interest and/or the presidential election. As a result, Arizona marijuana advocates inside and outside the legislature worry about making waves that would rock the boat of their passionate commitment to liberalizing the law.

Advocates for marijuana liberalization were outspent in the 2016 referendum by the opposition, thanks in large part to a $500,000 contribution by a manufacturer of opioids based in Chandler, Arizona. Those special interests will not go away.

Arizona voted for President Trump. While there are conservative areas of retirees in the state, a county-by-county count showed weed favoritism lies around the major population areas. These areas host senior retirement communities, but many seniors voted for Trump and in favor of the marijuana change. This suggests that if the vote on marijuana was not coinciding with the presidential election, it would have benefited from the separation.

President Trump campaigned on promises to prosecute drug criminals -- including those with marijuana-related charges. It’s not clear if he had a short or long-term policy in mind. But, he did appoint Senator Jeff Sessions as Attorney General.

Sessions has long been an outspoken opponent of marijuana use considering it a crime and gateway drug threatening American youth. Since his appointment, he has frequently made comments to that effect and has advised a meeting of states’ attorneys-general that he will:

Related: It Must Be Written In the Stars. Neil deGrasse Tyson Says Marijuana Should Be Legal.

Proponents of marijuana availability, accessibility and use find themselves in a bit of a bind. They want to take advantage of the successes involved in 2016, but they’re afraid to draw the ire of Washington. They find that Arizona has become a case test.

Fortune reports that U-Haul gave $25,000 to oppose cannabis decriminalization legislation, and “A pharmaceutical company that is working on a synthetic version of marijuana's psychoactive ingredient, Insys Therapeutics Inc., has given at least $500,000 to oppose full marijuana legalization in its home state of Arizona.”

In reporting by Phoenix New Times, it’s stated that “Insys Therapeutics, Inc., which has made billions selling a fentanyl-based drug called Subsys, expects to soon launch a pharmaceutical version of THC, the main psychoactive ingredient in cannabis.” The writer, Ray Stern, adds, “while Insys holds itself out as the savior of Arizonans' health, the company is reportedly under investigation in four states, including Arizona, for marketing practices related to Subsys that have allegedly resulted in patient deaths.”

The Washington Post points out that the Insys’ 2016 contribution of $500,000 “amounted to roughly 10 percent of all money raised by the [opposition] group in an ultimately successful campaign against legalization. Insys was the only pharmaceutical company known to be giving money to oppose legalization last year, according to a Washington Post analysis of campaign finance records.”

"Although Insys was purported to be the only pharma company funding a campaign opposing legalization, it’s pretty obvious that the big pharmaceutical companies don’t like the smaller cannabis kids on the block," remarked Michael Hannigan of InvestorsHub, the company behind the cannabis industry investor conference, MJAC2017. "Who wouldn’t want the biggest slice of this multi billion-dollar market?”

Others involved in the opposition include Steve Sanghi, CEO of Microchip Technology, Mark Minter, executive director of Arizona Builders Alliance, the Arizona Chamber of Commerce & Industry and various Arizona-based business interests. AZ Central reports opponents “are getting help from an influential, if informal, coalition of evangelicals, Catholics, and Mormons, who are motivating their flocks to vote against.”

But, these special interests would lose their battle in 2017 in equally conservative Arkansas. As reported in The New York Times, “Voters approved Issue 6 — Medical Marijuana Amendment — in Arkansas on Tuesday [Feb. 2, 2017]. The amendment called for legalizing medical marijuana for 17 conditions, creating a medical work commission and allocating tax revenue to technical institutes, vocational schools, work force training and the state’s general fund.”

It was approved by 53.2 percent of voters.

Related: What Every Cannabis Entrepreneur Needs to Understand About the Cole Memo

The recent medical marijuana law amendment expands the list of eligible medical conditions. It further refines regulations on distribution and aligned administrative functions. But, it doesn’t have much effect on existing medical cannabis dispensaries that have flourished since the original grant in 2010.

You cannot purchase medical cannabis in Arizona without a medical card from specifically authorized Arizona doctors. You also can’t purchase if you are not an Arizona resident and you cannot transport it out of state.

If you have the credentials, you can shop at the more than 120 Arizona dispensaries where you’ll find Indica and Sativa flowers. Medical cannabis dispensaries may also sell concentrates, edibles, transdermal products, seeds and clones.

Arizona law allows medical marijuana patients to buy 2.5 ounces every two weeks. Patients who live more than 25 miles from a dispensary may grow up to 12 plants.

According to AZMMCC, conditions currently approved for issuance of medical marijuana cards include:

But, there are some base costs that are prohibitive for some patients:

AZ Central reports that The Safer Arizona Cannabis Legalization Political Action Committee has “filed paperwork with the Arizona Secretary of State's Office to begin collecting signatures to get on the November 2018 ballot. It would need to collect 156,042 signatures from valid Arizona voters by July 5, 2018, to qualify.” 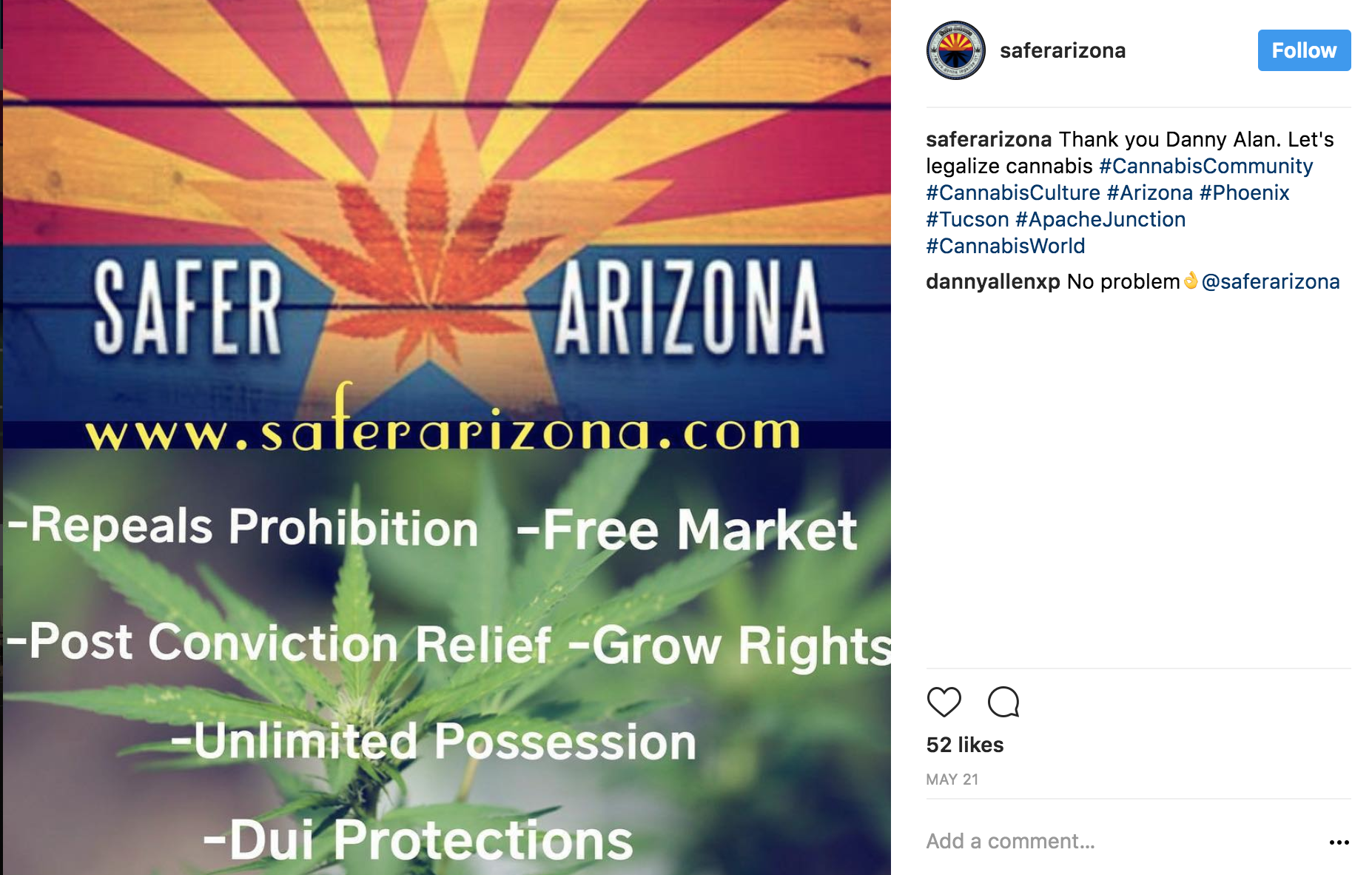 The ballot initiative comes from a group of activists in an effort will legalize cannabis and hemp growing, usage, and sales for adults 21 and up. Safer Arizona proposes that same licensing and regulations for the companies the state requires of any other business in that industry. It does also require mandatory testing of the cannabis product and labeling to make sure people know it has cannabis in it.

Beyond the cannabis testing, edible shops will be held to the same standards as any other food business.

The initiative also has post-conviction expungement. "Arizona has had cannabis as a felony for quite awhile," explained Safer Arizona Secretary Zack Ocker. "We hope by doing this it will allow many people to get their civil rights back and make it easier to find work as well".

Safer Arizona needs just over 150,000 signatures to make it to the November 2018 ballot, but the organization has set the goal of 300,000 to make up for any signatures the state decides aren't valid.

So, if you’re an Arizonan, you must sign the petition, contact your legislators regularly and finance the campaign with your time, toil and talent.

Andre Bourque (@SocialMktgFella) is a cannabis industry consultant who frequently writes about cannabis trends for Entrepreneur. He is a tech industry influencer and freelance journalist covering high-growth industries.

Cannabis Macaroons? Oui, They're a Thing

Will the Metaverse Be a Game-Changer for the Cannabis Industry?

Why Ethical Cannabis Buying Will Be Important in 2022

Top Marijuana Penny Stocks To Buy Under $1? 2 To Put On Your Watchlist Next Week