Growers and processors devastated by raging wildfire don't have federal crop insurance or access to disaster relief. They can't even legally crowdfund to help each other.

By Andre Bourque October 25, 2017
Opinions expressed by Entrepreneur contributors are their own.

The cannabis industry has an unusual conundrum--its collective empathy and generosity extends beyond its ability to provide it.

Take the recent, catastrophic fires in Northern California as an example. Industry losses are mounting and the ability for the cannabis community to rally together is strong but has limitations.

"These wildfires, especially in Northern California, are particularly devastating,” said Dr. Joel N. Myers, founder, president and chairman of AccuWeather. “At this time, we estimate the economic impact of the fires is already approaching $70 billion. Based on our forecast the total costs from this disaster on the economy would exceed $85 billion and, if the fires are not contained in the next couple of weeks, the total economic impact could even reach $100 billion.” Those numbers, however, do not take into account cannabis losses. Just as Sonoma and Napa Counties have a global footprint in wine agriculture, they have a lesser-known, yet high density of cannabis farms in areas as well. These fires have created a ripple effect across the entire local and regional economies, directly impacting at least 2,000 jobs. "We estimate cannabis farmers across the affected area have lost over $40 million in product at farm prices (over $150 million in retail value),” said Daniel D'Ancona, president of California Grow Services, in a written interview.

This had already been an extremely financially burdensome year for California cultivators even before the fires; efforts to move their businesses into the new compliant world claimed most of their cash-flow. California compliance costs are predicted to increase by $125,000 a year for small operations and by $310,000 a year for an average pot business. Chiah Rodriques, the CEO of Mendocino Generations, a collective of organic cannabis farmers in the county remarked, "So many of these people have literally spent their last dollar trying to get permitted."

The cannabis industry isn’t in a position yet to assess the devaluation of its unburnt products due to smoke damage but anticipates it. According to the Atlantic, "A 2015 research paper by the Australian Wine Research Institute found that exposing grapes to heavy smoke for just 30 minutes was enough to produce undesirable aromas in the resulting wine."

Cannabis has the same vulnerability. “Especially when it’s ripe, I can tell you from personal experience, wildfire definitely will make your cannabis have a smoky flavor to it; just like wine,” Kristin Nevedal, executive director of the International Cannabis Farmers Association told SF Gate in a September interview.

Cannabis exposed to smoke and ash also has potential health risks such as lung infections. Medical cannabis users with preexisting conditions such as lung or cardiovascular disease should be particularly careful about the condition of their cannabis.

Now facing an even greater financial hurdle with loss of crops (cannabis businesses don't qualify for crop insurance or federal emergency relief), they need help to make sure their businesses will survive. Farmers moved quickly to save their cannabis crop that didn't burn. Since many of the cultivating structures were burned, several companies and organizations rallied around the community offering support.

In Oakland, a quick-thinking group of activists and event organizers at New West Summit organized an impromptu, fundraising raffle. Well over 100 conference vendors donated everything from vaporizers, high-end vape units, to whole flour and manufactured products to the cause, generating $12,000 in two days. Jim McAlpine, New West’s executive director, knows the pain of loss first-hand. His parents’ house burned down in the fires.

Related: 5 Routes the Cannabis Industry Could Take to Get Around Federal Banking Restrictions

Crowdfunding campaign efforts, however, have been stifled. Speaking for the California Growers Association, executive director Hezekiah Allen remarked, “Our organization has been focussed on two tasks, identifying and collecting reports of losses and damages and raising funds to help support those who have suffered losses.”

Part of this effort was a You Care crowdfunding campaign for fire victims of all sorts, that was later shut down. In a written exchange with the crowdfunding platform, I was told YouCaring supports all forms of treatment and most disaster relief fundraiser types.

“Our payment providers (WePay & PayPal) do not allow anything marijuana-related, including for medical reasons.” Camelia Gendreau, head of integrated communications told me in an email. “This is because U.S. Federal Law prohibits the purchase and sale of marijuana. Subsequently, our payment providers are unable to process payments connected to the production or sale of cannabis (including CBD oil), even in situations where such payments would be permitted under State Law.”

Jeremy Milk, head of marketing at WePay, said that to comply with federal law "and related government notices, and requirements from our bank and credit card company partners, WePay does not process payments related to marijuana."

While donors saw an immediate refund of their contributions, tips were left out of the reimbursement. Milk explained, “WePay has processed all of the related refunds - for donations and tips. This completes all we can do on our end. People can expect to see the refunds reflected on their card statements within three to seven business days.” 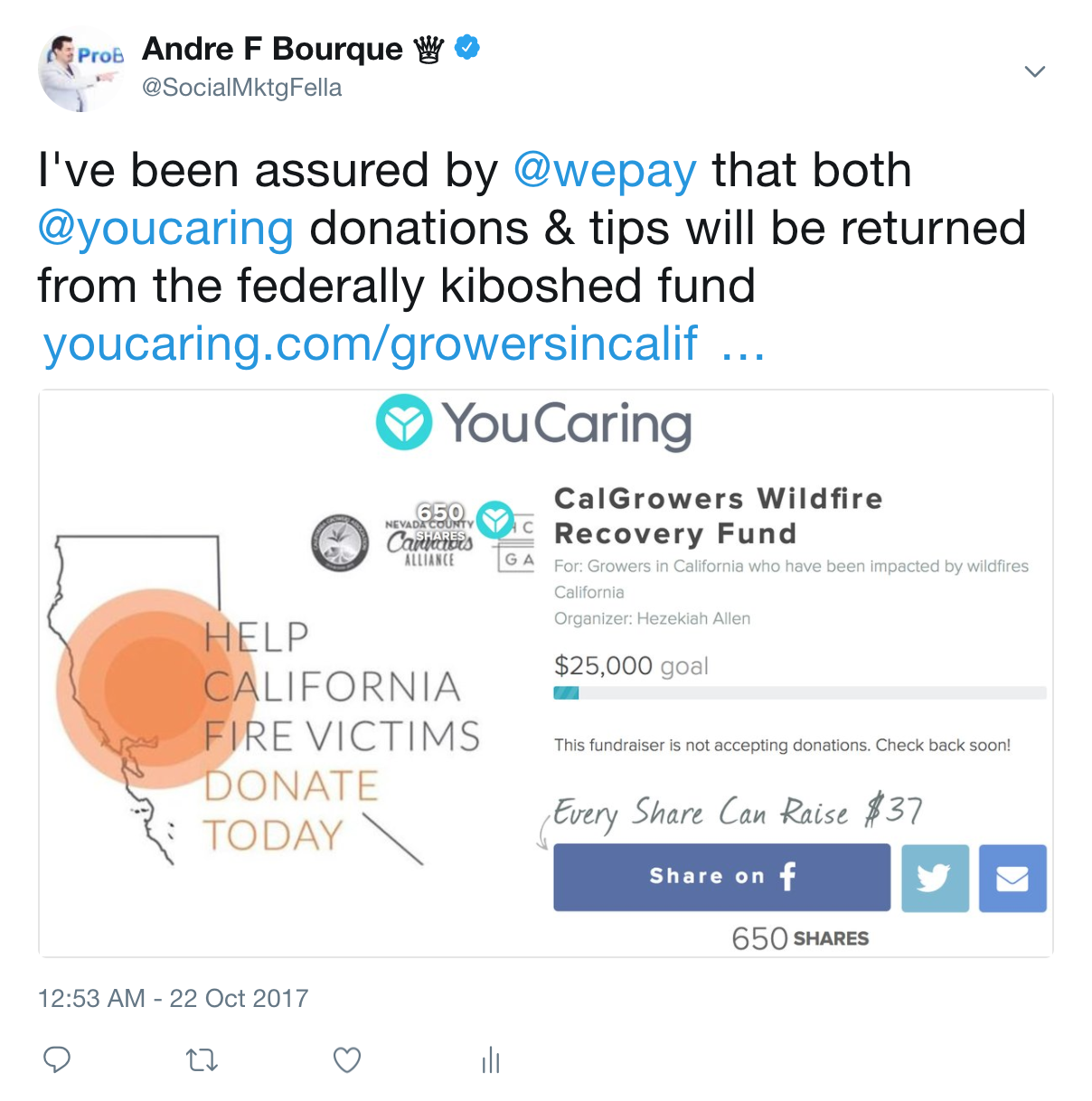 How will all this affect cannabis prices? It depends on whom you ask.

“The market might see price increases were there were only a few suppliers, but given how many suppliers there are, and given how each retailer has their own micro-supply chain (localized, relationship-based suppliers), the likelihood of an entire market experiencing a price increase is extremely remote,” Beau Whitney, senior economist at New Frontier Data argues.

Whitney points out that while several dozen farms were destroyed by the fires, there are possibly more than 20,000 farms in Humboldt County alone, some 2,200 of positioned to serve the adult use market when California’s laws change in January. “So, all else being equal, even if 50 farms were completely destroyed, and every one of them dedicated to the new market, they would still represent less than 2.3 percent of the supply overall.”

“It’s a drop in the bucket compared to what the state is producing,” Erich Pearson, the CEO of Sparc, a San Francisco-area medical marijuana chain that lost its farm in the fire, told Marijuna Business Daily.

Alternatively, Tamar Maritz, regional director for California at marijuana data insights company BDS Analytics, said Californians could expect to see prices rise as much as 10 percent to 20 percent in the aftermath of the fires.

The company found precedent in regulatory changes that shorted supply to the debut of recreational markets in Colorado, Washington and Oregon where a "major disruption in the supply chain" created price increases of the same magnitude.

Cannabis industry losses from the Northern California fires are widespread and unprecedented. It will certainly take years for communities to recover. But the process of getting there will be a uniquely collaborative one given the industry’s collective reverence for the plant and organizational respect for one another.

“Ensure that not a single grower fails to get a license because of wildfire-related hardship,” the mission statement of the California Growers Association wildfire recovery fund reads. That declaration has special meaing in the cannabis industry, which already has generations of proven resilience behind it.

Andre Bourque (@SocialMktgFella) is a cannabis industry consultant who frequently writes about cannabis trends for Entrepreneur. He is a tech industry influencer and freelance journalist covering high-growth industries.

Can Weed Help You Lose Weight?

Report: Kids Use Less Marijuana in States That Have Legalized

Yes, THC Can Impair Driving Skills — But Not For Everyone

Thinking About Practicing Cannabis Law? Here Are 7 things You Need to Know