Thanks to legalization and the ability to consume discretely by vaping or snacking on edibles, ever more adults are using cannabis.

By Javier Hasse October 16, 2018
Opinions expressed by Entrepreneur contributors are their own.

According to a recent study out of New York University, Baby Boomers aged 50 to 64 are consuming a lot more weed than they used to last decade, with 9 percent of those surveyed disclosing marijuana use in the last year. The report made headlines across the world, as many were surprised to learn American grandparents are picking up the herb.

The people behind the report in question reviewed data from MedMen cannabis dispensaries sales in California, and discovered that, while marijuana use is still highest among men under the age of 40, demographics are changing fast. Here’s a quick snapshot of the main findings:

“Our personas were developed using a mixed-method approach of machine learning and cluster analysis supported by content and qualitative expertise applied with scrutiny,” said Director of Research Bethany Gomez. Other interesting groups identified by the report include Boomerangs (Baby Boomers who are returning to cannabis in their later years), and the Liberal Elite.

Related: Building a Solid Foundation for Your Cannabis Brand Is Step One to Success 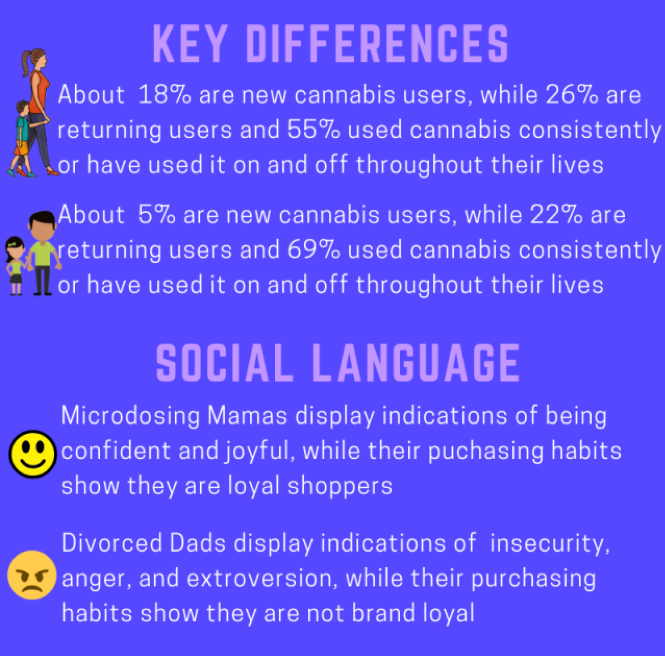 Adding to Gomez’s point, Green Market Report’s CEO Debra Borchardt said, “From the surveys conducted with these two profiles your selected, I found it particularly interesting that there was no real brand loyalty with Divorced Dads.”

“Microdosing Moms have an upbeat outlook and are more brand loyal,” she added. “This most likely accounts (or should) for why so many cannabis brands are trending toward targeting women in their advertising and marketing campaigns.”

Related: Here's Why the DEA Re-Scheduling Just One Cannabis-Based Drug Is a Very Big Deal

Here are some interesting stats on divorced men who  consume cannabis and have children:

Many mothers with children at home said they regularly use cannabis in small doses -- less than 100 mg. Out of them:

Watch Out. Europe Is Gaining Ground Over The U.S. In Cannabis Medicine