He's also an object lesson in how to promote the plant: When people talk honestly about it, progress happens.
Next Article

This story appears in the May 2019 issue of Green Entrepreneur. Subscribe »

Of all the things that could’ve harmed Tesla in recent years -- car batteries catching on fire, cash troubles, SEC probes -- nowhere on that list was the name Joe Rogan.

But then Tesla founder Elon Musk sat down for an interview on Rogan’s mega-popular podcast. Rogan lit a joint, Musk took a single (legal) hit off it, and video of the moment set the Twitter-verse and media ablaze. Tesla’s stock dropped 9 percent, and the Air Force reportedly reevaluated its relationship with the company.

Musk was forced to retreat; NASA administrator Jim Bridenstine, who works with Musk, said afterward that “Musk understands that that was not appropriate behavior.” But what did Rogan think of the dustup? He doesn’t talk much to the media these days -- word is that he worries about becoming overexposed -- but it’s safe to assume that Rogan saw a longer view. The incident created more national conversation about cannabis -- and conversation, which Rogan has become expert at sparking, seems to have a long-term net positive.

This may just be Rogan’s lasting contribution to cannabis in America. He is not the only high-profile cannabis crusader and is not attached to any cannabis product, but he’s easily one of the most provocative and prominent voices on the subject. And by regularly drawing attention (both scandalous and academic) to cannabis, industry insiders say he’s had an outsize impact on shifting people’s perceptions. In effect, he’s become the industry’s top salesman, not so much by selling as by providing a forum -- a dialogue that welcomes multiple viewpoints and challenges conventional wisdom and stereotypes. It’s a lesson the industry at large may well want to take: Direct engagement works.

“I love him,” says Lewis Goldberg, managing partner at KCSA Strategic Communications, a PR and media firm that represents many prominent cannabis companies. “I think Joe Rogan is doing about as much as can be done among celebrities to normalize the conversation around cannabis. He makes fun of it, but he also extols its medicinal value and virtues. He’s doing the industry a tremendous service.” 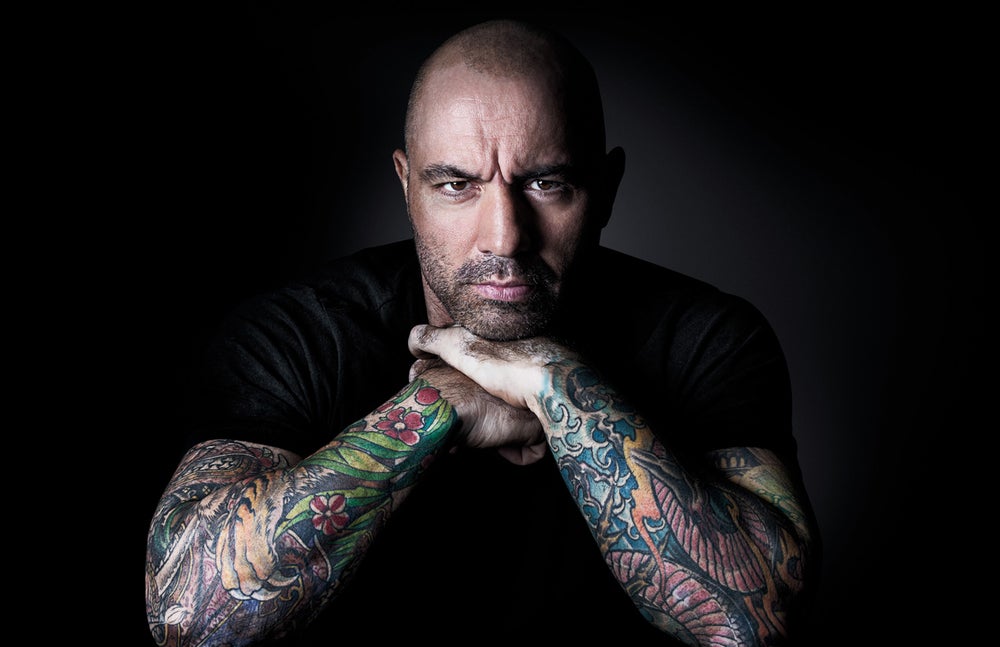 With his shaved head, weight-lifter physique, tattooed arms, and love of both fighting and hunting, Rogan doesn’t look the part of the prototypical, spaced-out pothead. And he’s not. He was born in Newark, N.J., and his family moved several times before ending up in Massachusetts, where Joe became a four-time state champion in tae kwon do. He’s said that he smoked only “a handful of times” in his teens at the insistence of friends and got into cannabis seriously around age 30, finding that it focused his martial arts training and made him more creative comedically. (He’s 51 now.)

Related: She Runs One of The Biggest PR Companies in Cannabis. So Why Haven't You Heard Of Her?

A move into stand-up comedy led to a career as an actor, host of the TV show Fear Factor, and as a UFC commentator. Cannabis advocacy followed as well. In 2007, he hosted the Canadian documentary The Union: The Business Behind Getting High. But his cultural cachet didn’t truly solidify until his show The Joe Rogan Experience debuted two years later, on Christmas Eve 2009; he comes off as an intelligent, curious, provocative, and funny host, and that’s helped propel the podcast to become the second most popular in the U.S., with nearly five million subscribers and counting.

Many advocates for a cause tend to lecture -- offering one viewpoint over and over. Rogan, by contrast, has used his show as much as a platform for discussion as for advocacy. Recently, for example, he moderated a heated three-hour debate between Alex Berenson, author of the book Tell Your Children: The Truth About Marijuana, Mental Illness, and Violence, and Dr. Michael Hart, founder and medical director of Readytogo, a medical cannabis clinic in Ontario, on the effects of THC and CBD. But Rogan didn’t just sit back and listen: When Berenson called out pot for contributing to mental health issues among young people, for example, Rogan cited the potential for social media to be a factor as well. When the topic turned to alcohol, Rogan pointed out the “giant number of people who drink themselves to death -- thousands and thousands and thousands of people every year, versus zero with marijuana.” And he raved about what he believes are the benefits of CBD in treating everything from cancer to AIDS to autism to glaucoma. 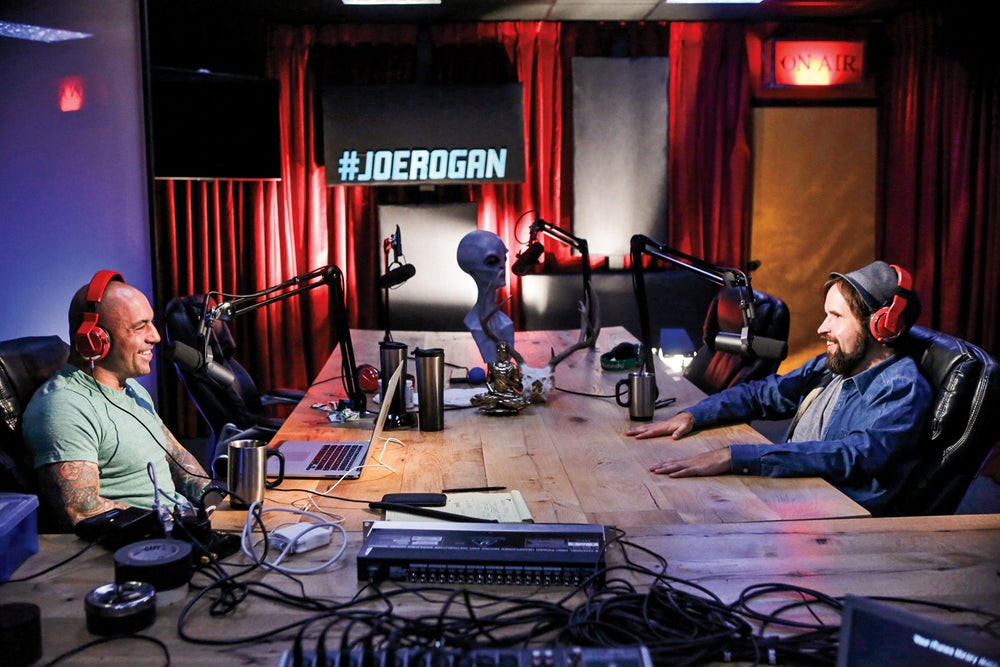 Berenson says he came away with a great deal of admiration for Rogan. “I was pleased with the seriousness of the discussion,” he says. “I heard from many users in the aftermath, and a surprising number told me it helped them understand their own problems with cannabis.”

Such is the power of open conversation. On another episode, Rogan debated prohibitionists Ted Nugent and comedian and political commentator Steven Crowder. Talking to Nugent, an avid hunter, Rogan compared the stereotype of pot smokers as listless stoners to the image of hunters as drunken slobs. With Crowder, who harped on the dangers of marijuana, Rogan referenced a study showing Colorado highway fatalities at near historic lows after its statewide legalization.

Critically, Rogan doesn’t come off as some brainwashed marijuana evangelist. “I don’t think marijuana is 100 percent safe for everybody,” he’s said on the show. “I know too many people that have had experiences where they took too much, particularly edibles, and freaked out for weeks. I think that human beings vary so much biologically, to just make this blanket statement, ‘What’s good for you is good for me’ is irresponsible, and I’ve been irresponsible in saying that before.” 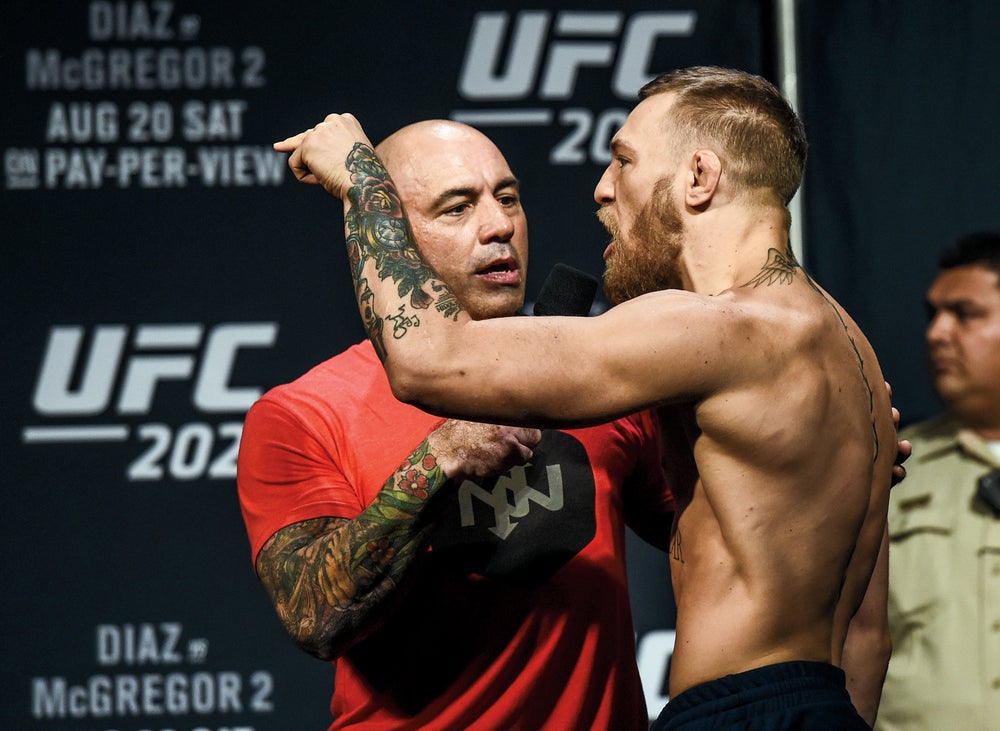 That kind of talk has won him many fans in the cannabis community, who say it’s a valuable way to build trust. “I’ve always respected the way Joe was open about his own cannabis consumption and encouraged guests and listeners to keep an open mind and do their research,” says Morgan Fox, media relations director at the National Cannabis Industry Association. “I think he’s played a big part in eroding the stigma surrounding cannabis for a wide audience.”

Mike Hannegan feels the same way. He cofounded his CBD company Everything Hemp USA after breaking his neck in a surfing accident, and says Rogan’s impact on the cannabis industry is substantial. “He’s really helped remove the outdated propaganda by greedy pharmaceutical companies,” he says.

As the cannabis industry moves forward, it could take many more cues from Rogan. His basic message seems to be this: Nobody has all the answers -- but if open conversation leads to curiosity, and people are willing to try new things, the end result can only be good…and, for that matter, lead to more legalization.

Why Cannabinoids Are Here to Stay

Terpene Profiles May Shape the Future of Cannabis

Meet the Most Elegant Storage System for Your Cannabis