Chart: Women Account for More Than a Third of Marijuana Business Executives

The percentage of women top executives in the cannabis space is still far higher than the national average for all businesses.

Nearly 37% of the senior-level jobs at cannabis companies are held by women, according to a Marijuana Business Daily survey.

Although the number of women holding top spots has vacillated since 2015, the percentage of women top executives in the cannabis space is still far higher than the national average of 21% for all businesses in the United States, according to the MJBizDaily survey conducted in June. 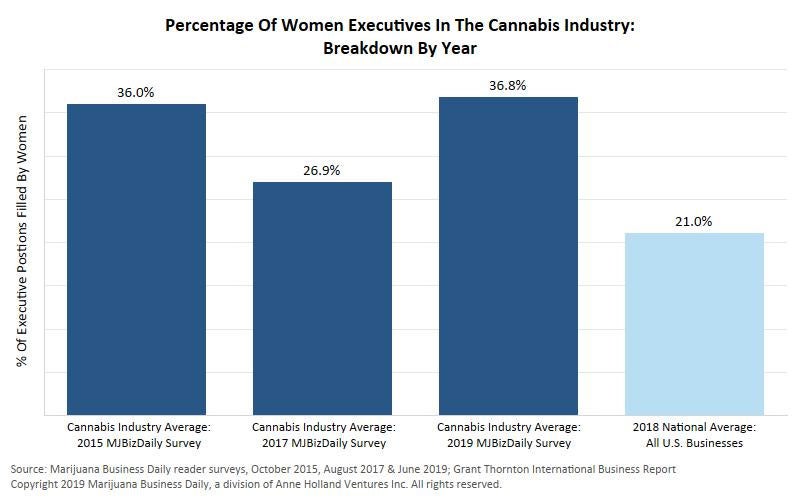 The data, presented in a new MJBizDaily report, “Women & Minorities in the Cannabis Industry,” highlights some of the challenges that women in the marijuana industry may face that men do not. The report can be downloaded for free.

Some industry experts suggest that more competitive markets favor businesses with men in ownership and leadership positions, primarily because of their established access to capital.

The money and resources companies need to survive and expand often comes from private capital markets, such as family investment offices and venture capital firms -- a largely male-dominated industry.

The general landscape has changed significantly since MJBizDaily’s survey on this topic in 2017.

That year, major recreational markets, including Colorado and Washington state, were no longer in their infancy and became highly competitive. This may have been harder on businesses with female executive teams, forcing some companies to close and some executives to exit the industry.

Since the previous survey, rec sales launched in California, Massachusetts and Nevada, while major medical markets such as Maryland, Ohio and Pennsylvania got off the ground.

Many young, quickly growing companies that initially filled key positions in sales, marketing or operations with whomever they could find -- often friends and family members -- are now looking to bring in people with more experience and expertise.

That’s presented a tremendous opportunity for women outside cannabis looking to advance their careers, some of whom may be frustrated with a lack of upward mobility in their current professions.

There’s also been a growing sense of awareness around the lack of both gender and racial diversity in the cannabis industry, prompting more concerted efforts among mature cannabis companies to fill key leadership positions with women and minorities.

Despite the swings between years, the portion of executive positions held by women in the cannabis industry has consistently outpaced that of businesses in the traditional economy.

There is no charge to download the full report, “Women & Minorities in the Cannabis Industry.”