Curaleaf and Surterra Are Top Spenders On Federal Marijuana Lobbying

A look at which companies are investing the most on The Hill.
Next Article Add to Queue

Learn how to get your business funded in the Cannabis economy!
September 11, 2019 7 min read
Brought to you by MJBizDaily


The marijuana industry has spent about $2 million so far this year lobbying for federal cannabis reform in Washington DC, and more than half that money has come from individual MJ-related companies.

Businesses and lobbying organizations said the investments are critical in helping lawmakers and federal regulators understand the importance of cannabis-related issues.

They are focusing on vexing industry problems such as banking, as well as broader reform and legalization efforts.

The payoff comes when reform occurs or public policy becomes clear, and companies can plan and operate accordingly.

“Markets do not do well in situations of uncertainty,” as is the case with marijuana currently, Richie Thorne, chief risk officer of Dama Financial, wrote in an email to Marijuana Business Daily.

Kansas City, Missouri-based Dama Financial, which provides financial services to the cannabis industry, has been lobbying for the SAFE Banking Act, which would enable banks to serve state-legal cannabis businesses without fear of federal punishment.

Multistate medical marijuana giants Curaleaf ($400,000) and Surterra ($240,000) trail only the Cannabis Trade Federation ($482,500) in spending on lobbying, according to data published by the nonprofit Center for Responsive Politics at OpenSecrets.org. 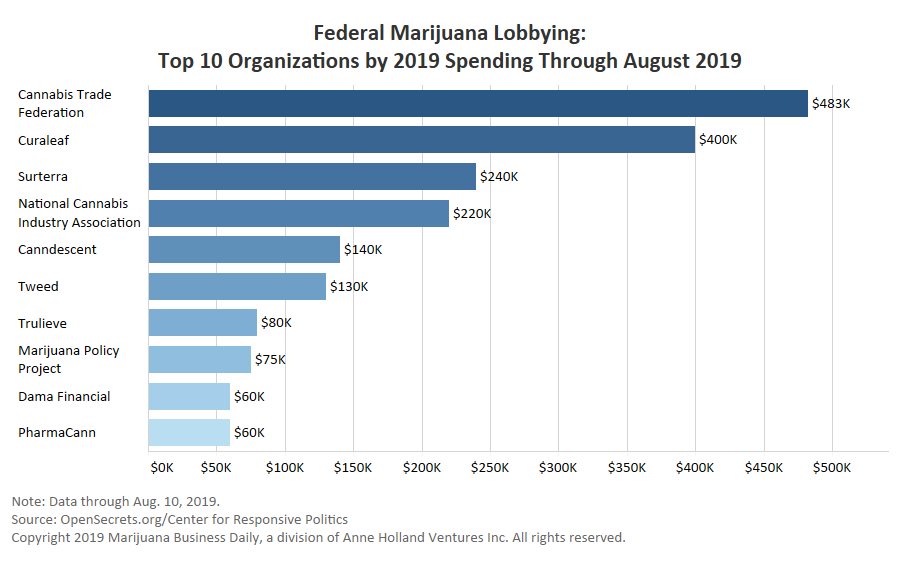 Dan Henry, Dama’s CEO and co-founder, wrote in an email that the company believes it’s important to meet directly with lawmakers and regulators.

Marijuana industry organizations, Henry added, “do a great job lobbying for the overall cannabis marketplace, but the financial services ecosystem is very complex and has an entirely different set of rules and regulators.”

Curaleaf and Surterra didn’t respond to multiple queries about their federal lobbying efforts.

Neal Levine, CEO of the Cannabis Trade Federation, said both companies are founding members of the organization.

“Whether by joining an organization like CTF, hiring your own contract lobbyists, or a combination of the two, when you’re in an industry that is federally illegal, it is wise to petition your government,” Levine wrote in an email to MJBizDaily.

“I would call that good business.”

RELATED: Why Do So Many Americans Now Support Legalizing Marijuana?

Where MJ businesses are focusing efforts

Curaleaf and Surterra both have focused on the SAFE Banking Act of 2019, STATES Act and RAISE Family Caregivers Act, according to data published on OpenSecrets.org.

STATES would protect all state-legal cannabis programs from federal interference.

RAISE Family Caregivers Act, which was enacted in early 2018, calls for the federal government to develop a national caregivers strategy.

Alcohol giant Constellation Brands, which owns a 35% stake in Canadian cannabis company Canopy Growth, spent $300,000 on lobbying this year, part of which has been on marijuana reform, according to the data.

The Cannabis Trade Federation beefed up its lobbying staff in part to advocate for the STATES Act, but filings show that lobbyists have discussed a broad array of marijuana reform bills with lawmakers and the Justice Department.

Saphira Galoob, executive director of the National Cannabis Roundtable and CEO of The Liaison Group advocacy firm, is a longtime lobbyist who believes relationships are critical to getting things done on Capitol Hill.

Also critical, she said, is “how well the industry works together in ensuring that we’re all rowing in the same direction.”

Boehner, a Republican and marijuana business convert, is listed as Roundtable’s chair and is advising the group.

But he didn’t plan to register as a lobbyist and hasn’t done so, according to OpenSecrets.org, so he isn’t personally doing any lobbying.

The Roundtable has focused on the SAFE Banking Act through meetings with lawmakers and Treasury Department staff.

“I’m a pragmatist, and banking is key for the (marijuana industry) constituency,” Galoob explained.

“It marks the place where we have the broadest bipartisan support, so it’s an immediate win, and then you build for another win.”

The marijuana industry spends a relatively low amount on lobbying, according to Washington watchers.

By contrast, the Pharmaceutical Research and Manufacturers of America has spent more than $16 million on lobbying this year, and nearly 20 individual pharmaceutical companies have spent at least $2 million each.

But Levine of the Cannabis Trade Federation said he believes the cannabis industry gets a lot of good work done with relatively few resources.

Galoob said she believes the cannabis industry could do a better job coordinating and prioritizing its lobbying efforts.

There are a number of industry organizations that lobby in Washington DC.

Morgan Fox, communications director for the National Cannabis Industry Association, said he believes the groups agree on goals and strategy about 90% of the time.

RELATED: How Will Businesses Handle Legalized Marijuana in the Workplace?

The future of MJ reform

Most lobbyists acknowledge that major marijuana reform isn’t likely before the 2020 elections. So success has to be measured accordingly.

They cited these examples:

“Let’s assume that we all agree that having patients and their families sharing their stories is the most important thing to do,” Don Murphy, Marijuana Policy Project’s director of federal policies, wrote in an email.

“Beyond that is having those businesses that don’t actually touch the plant to weigh in. When bankers, insurers, state treasurers and veterans groups share their concerns and interest with lawmakers, it has an impact.”

Lobbyists often cite as a critical step forward the support of the American Bankers Association, which testified in recent congressional hearings on behalf of cannabis banking reform.

Murphy said he recently had four meetings with congressional staffers where each one commented about the large number of meetings and calls they had with groups not directly tied to the marijuana industry.

But the cannabis industry must recognize that, at least for the time being, reform remains a low priority compared with other issues such as immigration and health care.

Here's How to Help Advance Cannabis Reform in Your State

California Is Requiring Cannabis Health-Warning Labels. Not Everyone Is On Board.

The Federal Government Doesn't Necessarily Have to Legalize Marijuana. This is Why.

5 Lessons the U.S. Can Learn From Canadian Cannabis Legalization.