The Reinvention Of Mike Tyson: How He's Rewriting His Story With Cannabis

The former heavyweight champ describes how Cannabis helped him redefine himself.

Mike Tyson hasn't had a professional fight since 2005, but the strength in his handshake suggests the former boxing champ still packs plenty of power in his fists. Yet Iron Mike is focused on another sport these days.

Melted into the pillows of a couch, he was watching the U.S. Open. His daughter is a serious tennis player and Tyson often brings her to watch the pros in person. "We just left this place," he said without shifting his eyes away from the TV.

Tyson was hanging out in a second-floor office at The+Source, a dispensary in the Las Vegas suburb of Henderson, Nevada, where the "baddest man on the planet" also owns a home. The 53-year-old is about to head downstairs for a public appearance to celebrate the release of his Tyson Ranch cannabis products at a growing number of dispensaries in Nevada.

Until now, the line was exclusive to the Planet 13 cannabis superstore, where it quickly became a top seller.

Tyson Ranch isn't a vanity project. The brand operates under Ranch Companies, founded by Tyson and CEO Rob Hickman. The once-menacing boxer is a daily fixture in the El Segundo, California, headquarters and actively involved in business operations. Signature products include Dwiink, a bottled, cannabidiol (CBD)-infused beverage with a name that plays off Tyson's famous lisp; and The Toad, a strong indica strain that tests at nearly 37% THC and 43% total cannabinoids. It's a Tyson Ranch exclusive.

"We didn't grow that, but we found the guy who did," said Kevin Bell, chief operating officer of cannabis and hemp operations. "Show us the lab test. … If Mike likes it, we're selling your product." 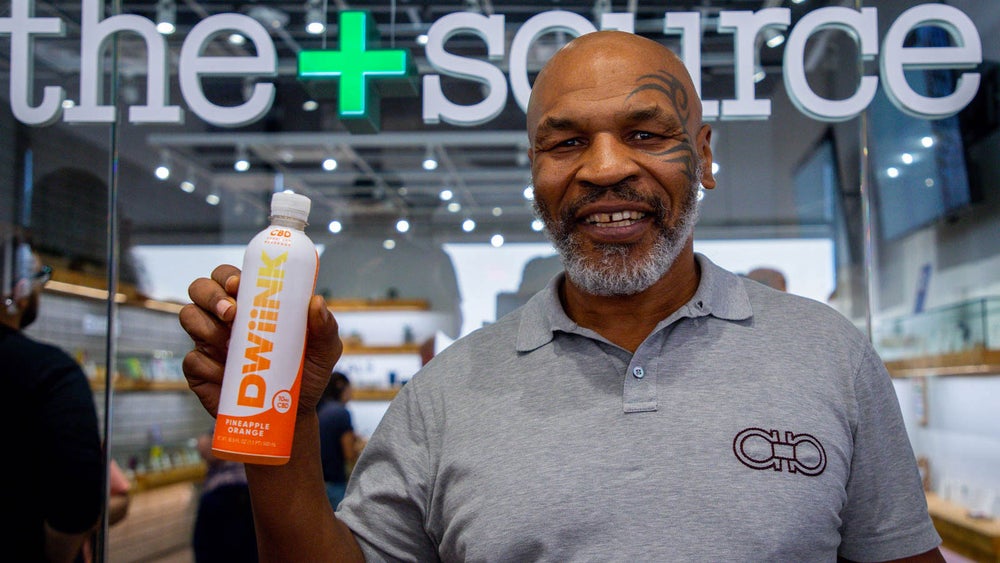 Mike Tyson promotes his Dwiink cannabidiol (CBD)-infused beverage at The+Source, a dispensary in Henderson, Nevada, where Tyson also has one of his homes in the Las Vegas suburb.
Image credit: Courtesy of The+Source

THC products by Tyson Ranch are currently available throughout California and Nevada with plans for distribution in Colorado, Washington, Massachusetts, and Oklahoma in the near future. CBD products are available in 46 states with a global presence quickly taking shape. If that wasn't enough, more than 400 acres near Palm Springs, California, are being developed into an actual Tyson Ranch. Think of it as a resort or amusement park where you can light up while lounging on a lazy river.

This could be just the beginning. Tyson is wasting no opportunity in cornering the market on cannabis culture. His pot-centric podcast, "Hotboxin' with Mike Tyson," has hundreds of thousands of online subscribers who tune in for celebrity interviews with the likes of Tony Robbins and Snoop Dogg.

It's an impressive story of reinvention for Tyson, who has struggled through controversies in and out of the boxing ring after becoming the youngest heavyweight champion in boxing history at 20 years old. He opened up to Weedmaps News about his early exposure to cannabis, smoking before a professional fight, and using weed to be a better person.

Q: How were your first introduced to cannabis?

A: My mother's friend used to smoke marijuana, and she gave us some — to try and put us to sleep, I guess.

Q: How old were you?

A: Six, seven. Young, real young. I've been using it ever since.

Q: Were you able to use it as a boxer?

A: I used it in one fight as a boxer. Great fight, great outcome, felt great, everything was good.

Q: Which fight was that?

Q: You used cannabis as part of your training regimen?

A: No. I just got nervous the night before and I smoked.

Q: Were you tested for it?

Q: Do you think cannabis can help boxers today?

A: I think all athletes should smoke marijuana if that's what they choose to do. I'm not pushing it on anybody. I'm just telling people who are like me, who experience pain from a long career, [to consider] cannabis. 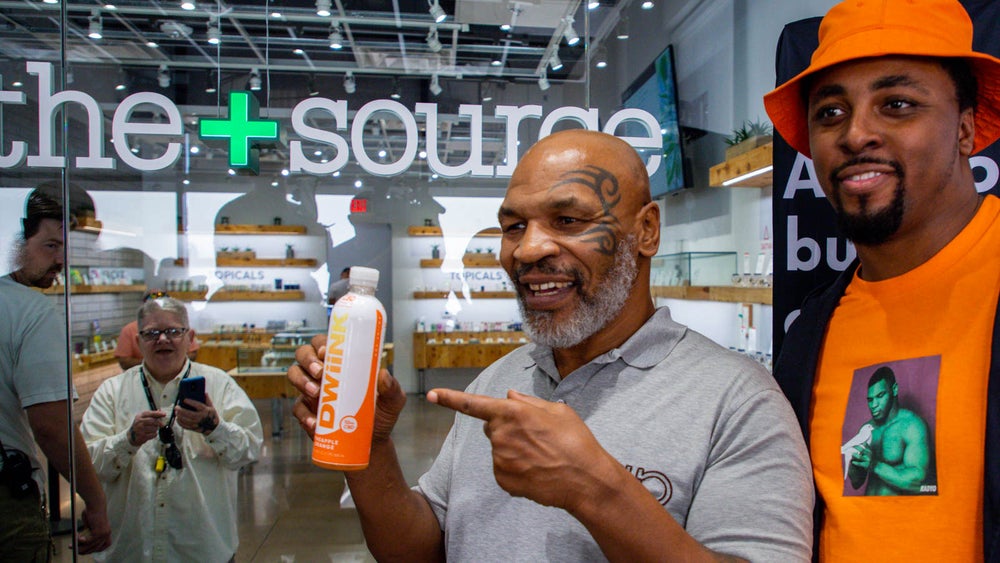 Along with Dwiink, boxing legend Mike Tyson has his own cannabis brand, Tyson Ranch. And yes, there are plans for an actual 400-acre Tyson Ranch near Palm Springs, California.
Image credit: Courtesy of The+Source

Q: How did you get involved with Tyson Ranch and the business of cannabis?

A: My partner Rob Hickman informed me of the do's and don'ts, ins and outs [of the industry] and it was a no-brainer. I decided to get in.

Q: You're not just the face of the company. I hear you're actively involved in the office. This is part of your lifestyle. Tell me about your personal involvement with the business, aside from public appearances.

A: I work every day. I'm involved with all the decision making. It's my baby.

Q: Is Tyson Ranch targeting a broad audience? Or do you see this as an opportunity to market cannabis to athletes?

A: No. This is world domination. This is for everybody from all walks of life. Anyone who can breathe air.

Q: Would your boxing career have been different if you were able to use cannabis more openly?

A: Oh, definitely. I wouldn't have had as many lawsuits. I wouldn't have been locked up as many times as I was either. If I had been smoking marijuana instead of taking those pills that made me feel like a zombie, I would have never got into the fights that cost me all of those millions of dollars. I'm talking about street fights and brawls that cost me so much goddamn money. I didn't even know these people.

Q: What about cannabis as an alternative to painkillers and opioids?

A: I was a user of opiates most of my life. I'm bipolar, I'm tripolar, and I'm manic depressive. I'm all these fucking things. So I took all these pills and I became worse. I became obese, I became a zombie. So I changed my whole life, I started smoking and used no more opiates. I lost 45 pounds. My life turned around and that's why I'm here talking to you now.

RELATED: The 7 Most Potent CBD Strains

A: My favorite strain is The Toad. The Toad all the way. I can't even explain the effect.

Q: What's the concept behind Dwiink?

A: We needed a new water with a CBD push to it. I believe CBD is the future and [eventually] CBD will be part of our DNA.

Q: You've really reinvented yourself. Your career has covered so much ground, starting as a fighter and now a major player in the cannabis industry. How does it feel to have this new chapter in life?

A: When people say that word [reinvention], I always say — survival. I don't think I'm resurging. I just never gave up.

A: Life is a continuous fight. We don't win all the bouts either. Who's going to win in the end? It's like a marathon. Do we give up or lay down before we get to that level of the game?