Florida's Medical Cannabis Industry Has Only One Truly Dominant Player

The state's roughly half-billion-dollar market is dominated by Trulieve, which is capturing nearly half of all sales.

Florida’s medical marijuana market is often described by industry watchers as an oligopoly – dominated by a few vertically integrated operators.

The reality is that the roughly half-billion-dollar market is dominated by one player – Florida-based Trulieve, which is capturing nearly 50% of all sales.

No other company comes close.

Experts say that Trulieve’s dominance shows how critical it can be to get an early, strong foothold into a market even when, in Florida’s case, smokable flower sales only recently were allowed.

The phenomenon also speaks to how telling per-store sales are and raises the question of whether such financial transparency is being conveyed to cannabis investors today as much as it should be, said Andrew Livingston, director of economics and research at Denver-based cannabis law firm Vicente Sederberg. 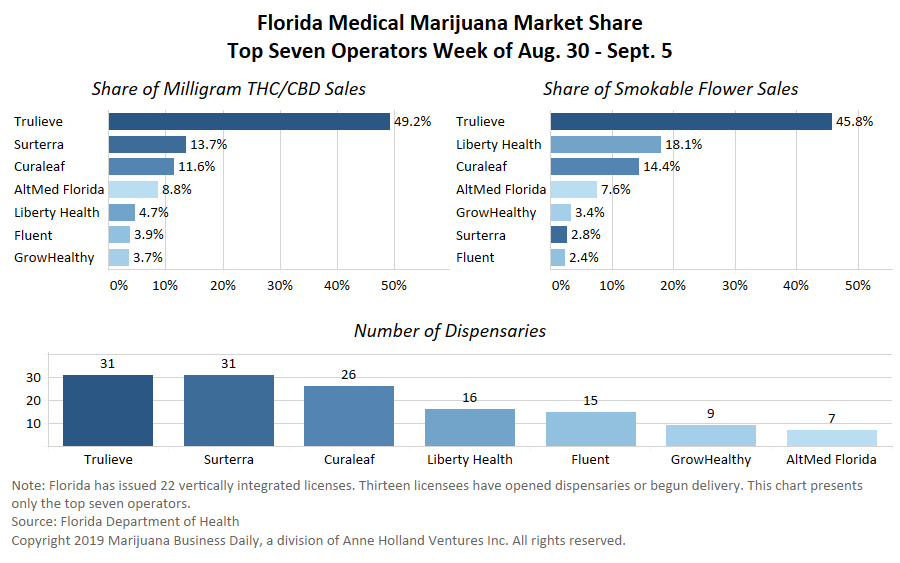 Trulieve’s Florida dominance doesn’t come from the fact that it is tied for tops in the number of dispensaries – although that clearly helps – but instead from a staggering sales-per-store average, according to an analysis of weekly state MMJ reports by Vicente Sederberg.

The market dynamic has largely continued in the six months since the state lifted a ban on smokable flower in March.

Trulieve was the first out of the gate with smokable flower and controls nearly half the booming flower market, which already is generating roughly $4 million a week in sales, making it a $200-million-plus industry itself.

“They’re dominating. There’s no doubt about it,” said Jeffrey Sharkey, executive director of the Medical Marijuana Business Association of Florida, an industry group.

Peebles, who also serves as vice chair of the state of Florida medical marijuana advisory board, attributes Trulieve’s success to an early and aggressive retail strategy – and excellent marketing.

“We have aggressively built out our network of dispensaries from the Panhandle to Key West to be in communities throughout our large and dispersed state,” she wrote in an email to Marijuana Business Daily.

Trulieve and Surterra Wellness lead the state with 31 dispensaries each as of Sept. 6, according to state figures. Curaleaf has 26.

There are 162 dispensaries statewide – a tripling in the past year alone.

In other words, Trulieve has nearly a 50% share of medical cannabis sales despite operating fewer than 20% of the state’s dispensaries.

That’s because of an “astounding” dominance in sales per store, said Livingston of Vicente Sederberg.

He calculated Trulieve’s average sales per dispensary in non-smokable medical marijuana products alone is triple to quadruple that of Surterra and Curaleaf respectively.

Livingston crunched numbers on a spreadsheet from weekly reports by the Florida health department, which regulates the medical cannabis industry.

The only operator that comes close in sales per store – and still trails Trulieve by a good 30% – is AltMed Florida.

But AltMed had only seven dispensaries as of Sept. 6.

State officials started posting product sales by licensed operators in early May. The figures are by quantity sold, not dollars.

Livingston said the Florida market proves how valuable sales-per-store data might be in terms of evaluating how well a cannabis business is really doing in a market.

But the number of dispensaries tells only part of the story.

“It’s not only the biggest in its weight class, but the fastest, and packs the hardest punches.”

Also By Far The Leader In Smokable Flower

Trulieve has a similarly dominant position in smokable flower sales.

The closest competitors were Liberty Health Sciences with an 18% market share and Curaleaf with 14.4%.

Liberty Health, which has 16 dispensaries, has done well through aggressive pricing that includes one cannabis flower product for $28 for 3.5 grams, or an eighth of an ounce.

Surterra doesn’t have much of a smokable flower business. Its sales accounted for only 2.8% of the market.

Smokable marijuana sales may be approaching $4 million a week in Florida, based on the amount sold and prices of roughly $10-15 a gram.

Why is Trulieve so dominant in Florida?

In addition to an early and aggressive retail presence, Peebles, Livingston and Sharkey cite these factors:

“We approached the market with customer-centric values,” according to Trulieve’s Rivers, such as “home delivery from Day One,” product variety and consistency, and educational seminars for consumers.

In some industries, the first strong company off the blocks simply is tough to displace because of brand recognition.

There are signs Trulieve’s market share is declining a bit as competitors continue to open dispensaries at a rapid rate.

Trulieve a year ago had 16 stores, or nearly a third of all dispensaries in the state.

In early May, when the state began releasing THC and CBD medical marijuana product sales in milligrams, Trulieve had roughly 55% of all those sales.

Peebles said that some licensed companies may have held back from opening dispensary locations until flower was legal because flower can be a leading sales driver and profit maker.

Florida has licensed 22 vertically integrated operators, but only 12 had opened dispensaries as of Sept. 6.

Additional licensing opportunities are expected to open up as a result of a legal challenge to Florida’s vertically integrated structure and license caps.

Lower courts ruled that the restrictions ran counter to a voter-approved constitutional amendment in 2016.

The case has been appealed to the state Supreme Court.

Taylor Biehl, legislative programs director for the Capitol Alliance Group in Tallahassee and co-founder of the Medical Marijuana Business Association of Florida, said that before the state Supreme Court decides, the Legislature still has the ability to act.

Lawmakers, he said, could craft their own language that would allow for a “reasonable number” of stand-alone cultivation, processing and dispensary licenses.

Sharkey said the industry association favors such an approach.

“But there’s still room to grow,” he noted. “Demand is still significant in Florida.”

As more players enter the space, it stands to reason that Trulieve will lose some of its dominance.

“The laws of statistics would suggest their percentage of sales will decrease,” Sharkey said. “How much, it’s hard to say.”

Jones Soda Wants to Shake Up the Cannabis Business