Marijuana Vape Sales Rebounding In Some Key Markets (For Now)

The vape market is taking a hit in the media, but sales aren't totally being impacted negatively just yet.

Vape sales appear to be stabilizing in most major recreational cannabis markets in the United States in the wake of the vaping health crisis, but with more bans and sales restrictions on the horizon the rebound could prove short-lived.

After several weeks of declines, vape’s share of adult-use cannabis sales in California, Nevada and Washington state is beginning to slowly tick back up, according to Headset, a Seattle-based provider of data and analytics to the cannabis industry. 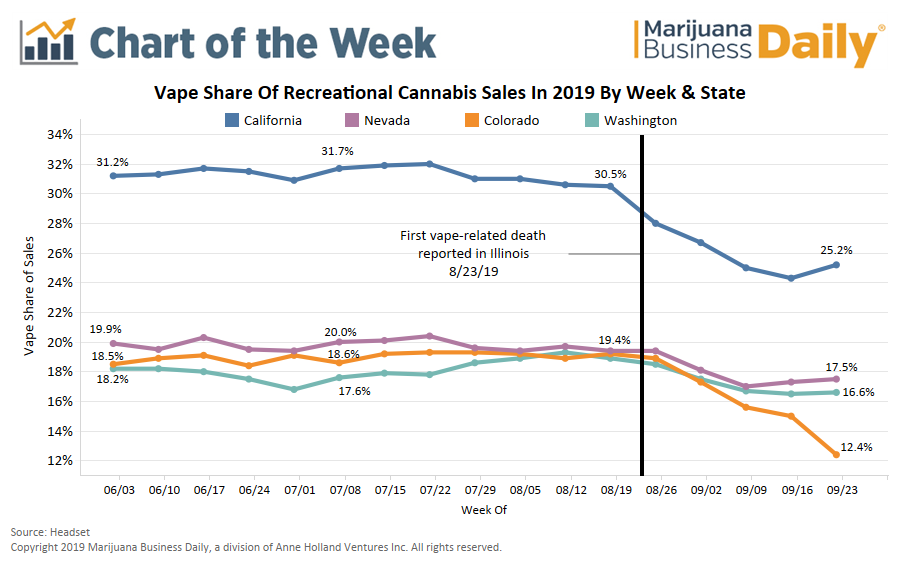 Vape’s share of the recreational cannabis market in California fell for four consecutive weeks, from 30.5% the week of August 19 to 24.3% by the week of September 16. But the latest week’s worth of data shows vape’s market share in the state up nearly 1 percentage point, to 25.2%.

In Nevada and Washington state, vape’s share of the adult-use cannabis market has risen in recent weeks, albeit more gradually.

It’s perhaps a sign that consumers are feeling more confident in vaporizers purchased from the legal cannabis market.

A recent CDC report found the majority of patients sickened in the vape epidemic that used marijuana vaporizer products in Illinois and Wisconsin purchased them from the illicit market, not licensed marijuana businesses.

However, a forthcoming, four-month ban on all flavored vaping products – including those that contain THC – in Washington state, as well as a proposal to ban all cannabis vape products in the city of Los Angeles, threaten to stop the vape sales recovery in its tracks.

Massachusetts has already nixed the sales of all tobacco and marijuana vaping products until Jan. 25, 2020.

The story in Colorado, however, is different.

Regulators there haven’t implemented – or even publicly discussed – any significant measures to ban or restrict marijuana vape sales.

But vape’s share of the adult-use cannabis market in Colorado has been declining since late August, down nearly seven percentage points from the week of August 23 to the week of September 23 – equivalent to a 32% overall fall.

Liz Connors, director of analytics at Headset, thinks that one reason vape’s market share has continued to fall in Colorado is the prevalence of the vertically integrated business model in the state.

Vertical integration is less common in California and Nevada and is prohibited in Washington state.

Vertically integrated businesses grow cannabis in addition to operating retail stores, allowing these companies to sell the cannabis they grow in their own shops instead of relying entirely on outside suppliers.

This typically results in higher margins to the company versus relying on third-party suppliers to provide products such as vape cartridges.

The higher margins provide vertically integrated business an economic incentive to sell their own products, and it appears Colorado companies are taking advantage of the recent negative PR surrounding vaporizers to push sales of flower over vapes.

RELATED: What's Really Going On With The Vaping Crisis

From January through July 2019, before the vape crisis hit, flower sales in Colorado were up 1% over the same time period in 2018.

Through the first four weeks of September 2019, house-brand flower captured 75% of total flower sales in Colorado.

Earlier in the year – from January through July 2019 – house-brand’s share of the flower market in Colorado stood at 61%.

So it may not be the case that consumers in Colorado are more wary about vape products than consumers in other legal markets, but rather that Colorado retailers have seized on a unique opportunity to replace one marijuana inhalable – vape products – with another – flower – that offers significantly higher margins because it was produced in-house.

RELATED: I Smoked A Black Market Vape. This Is Why I'll Never Do It Again

Unquestionably, the torrent of negative press surrounding vaporizers of late has hurt marijuana vape sales – which was the fastest-growing segment of the cannabis industry in 2018.

However, we don’t know yet if this is a temporary blip on the radar – where spending on vape products ultimately rebounds to pre-crisis levels – or whether it will have a lasting on the long-term sales trajectory of the vape category.

How to Remain Competitive in the Vape Space

How to Spot a Fake Vape Cartridge

Cooking With Cannabis This Holiday Season

What Is The Cannabis Community Thankful For This Thanksgiving?