Insider Start Your Own Cannabis Business

Tips For Opening A Dispensary Where Nobody Wants You

Neighborhood opposition has killed many a plan for opening a dispensary. How do you deal?
Next Article
Mark Hay
Magazine Contributor
November 21, 2019 7 min read

On October 25, 2018, some 120 concerned citizens in Brookline, Mass., took to the streets, waving placards and chanting slogans, to protest a development they believed would imperil the local children and businesses: a retail cannabis shop.

The protesters soon organized themselves into Save St. Mary’s Neighborhood, a powerful coalition that collected more than 1,200 letters opposing the proposed store. They argued that the dispensary would bring in too much traffic, clogging streets and changing the character of the neighborhood. They argued that it would be a bad influence in a family-minded area, with at least 13 nearby youth-oriented institutions. They argued that the store would be, by their analyses, in slight violation of several zoning ordinances. They even argued that retail cannabis is so new, opening up a shop would be akin to subjecting locals to “a big experiment.”

RELATED: 4 Crucial Steps To Maximize The Sale Price Of Your Dispensary

From the outside, it all seemed strange, given that Brookline voted 60 percent in favor of legalizing recreational cannabis in 2016. As one local resident explained it to reporters, “I’m a libertarian, and I think if you want to smoke pot, have a blast.” Yet when faced with the prospect of a dispensary opening in her backyard, she hedged: “But not here.”

It’s an attitude that is fairly widespread. The Pew Research Center found that while around three quarters of Americans support legalizing medical marijuana, nearly half said they’d be concerned about a dispensary opening in their area. That study was done in 2010, but subsequent reports suggest the ambivalence hasn’t changed. Why? People’s concerns echo those of the St. Mary’s protesters. Many fear a cannabis business will attract crime, even though initial evidence suggests that’s not the case; in fact, these outlets may lead to less petty crime. And research out of the University of Michigan this year found that even pro-cannabis parents worry a lot about a dispensary’s impact on children -- pot winding up in kids’ hands, impaired drivers running into them.

In Massachusetts, opposition has been especially fierce. Since the state legalized recreational cannabis three years ago, fewer than two dozen stores have managed to start selling it -- and most of them were already operational as medical marijuana vendors. Ascend, the company that tried to set up shop in Brookline, eventually gave up.

But dispensaries have opened in hostile neighborhoods all over the country, and continue to do so, and that’s because founders have figured out what it takes to get invited to the party. 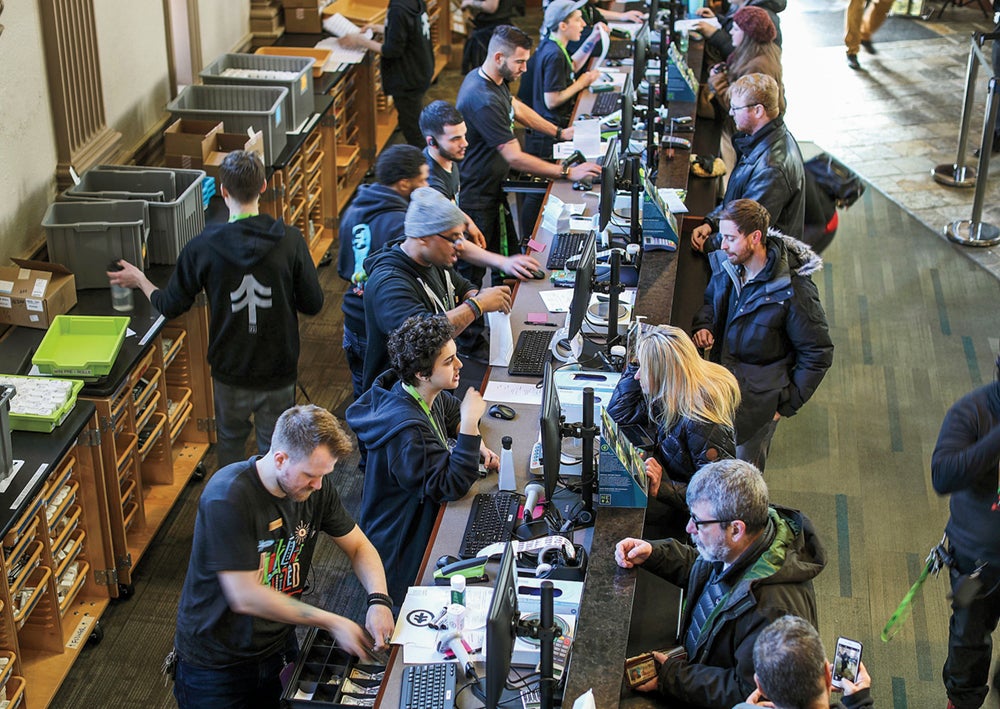 Brendan McKee, co-owner of Silver Therapeutics in Williamstown, one of the first stand-alone recreational retailers in Massachusetts, stresses the importance of taking time -- years, even -- getting to know an area’s concerns and contours before you begin. That doesn’t mean just reading up on the place. It means “boots on the ground, spending time in the community, introducing [yourself] to people,” explains McKee.

The Ascend team, for example, hosted community meetings in Brookline, but that was part of a licensing application process. Doing only what’s required of you won’t convince most skeptics that you actually care about local concerns and want to become a constructive part of the neighborhood. From the very conception of a store, McKee suggests attending community board meetings, town halls, and other local public events, and introducing yourself in front of the room. Stick around and meet people, tell them about your business plans, and gather candid feedback. Find out who the prominent local activists, organizers, and businesspeople are, and reach out to them directly to find times to talk shop.

McKee and his associates had an easy time in Williamstown because they all lived there, or had at some point. But then McKee decided to open an outpost in Boston. “We’ve already done two community meetings with the local neighbors’ association,” he says -- an optional overture intended to help his team become familiar with the area they want to move into. He points out that in many residents’ minds, a new dispensary will just be a profit-driven corporation that won’t respect their needs or care about them. It’s important to humanize your business.

RELATED: CBD Is A Crowded Industry. Here's How One Brand Learned To Stand Out.

Bring Something To The Table

Getting a community to acknowledge that your dispensary probably won’t do them any harm and has a legal right to exist is a low bar to clear. Many locals ideally want a new business to enrich the neighborhood, not just the proprietors. Some towns and municipalities in Massachusetts have caused controversy by demanding that in order to get a permit to operate, cannabis stores must agree to pay extra community fees or donate to a local charity.

McKee suggests heading off such demands by coming to the table with your own solid plan for how you’ll benefit the area. (If you’ve listened well, you should have some idea of what will make residents happy.) He’s done that in the Boston neighborhood he hopes to open in by telling residents that Silver Therapeutics will “build in a very cool nonprofit component, where we’ll teach local people how to cultivate and sell cannabis.” The idea, he says, is to get neighbors involved in the industry themselves, giving them skills to make money in it, so they don’t feel like hostile invaders are creeping into their orbit.

In Brookline, home of the St. Mary’s protests, there is one cannabis store that managed to open, New England Treatment Access. The key to how it did that, says Amanda Rositano, president of the dispensary chain, is the philosophy of taking residents’ concerns seriously “even if you might think that they’re a little overblown.” Rather than immediately flashing studies in their faces to show they’re wrong, she says, let skeptics tell you what would make them feel heard and secure. From there, you can respond with plans and expert testimony that expressly answer their asks.

This process may not win over everyone with doubts about a dispensary coming to town, says Rositano. And it can be incredibly time-consuming, acknowledges McKee. But when done right, it will hopefully convince a critical mass of people that you are responsive, competent, and genuine. And those people, explains McKee, may even come to your defense. He can recall several times when a local stood up in a community meeting to quell concerns raised by other members -- better than the Silver Therapeutics team ever could have done alone. That’s when you know you’re about to become a neighbor.

3 Tips To Futurize Your CannaBusiness With Artificial Intelligence

Building A Financial Plan For Your Cannabis Business? What You Need to Know

From The Glamorous World Of Wine, Meet The Entrepreneur Leading The Gourmet Side Of Cannabis