Are Weed-Infused Drinks The Future?

Sitting around getting high has a way of inspiring the most mind-blowing business ideas -- not that they always see the light of day. But Lagunitas Brewing Company, a subsidiary of Heineken International, actually took one and ran with it. Lagunitas brewmaster Jeremy Marshall was chilling a couple of years ago with the team over at CannaCraft, a Sonoma County, Calif., cannabis grower and distributor. “It was like friends hanging out in a room smoking weed, just jibber-jabbering,” Marshall says. “There weren’t any suits. No forecasts. We weren’t thinking about market share. It was very organic.” The idea? A cannabis beer, now sold in California and Colorado dispensaries, called Hi-Fi Hops.

When most folks think marijuana, they picture a joint or a vape. But it’s time to start imagining a glass of amber beer or sparkling white. The drinks are not booze, but they do go down like it, and you definitely get a buzz. Because federal regulations nix alcohol and THC in the same drink, established beer and wine brands have started partnering with marijuana companies, banking on the idea that booze-free cannabis beverages will make a big splash in the market, especially with legalization. Smaller entrepreneurs are jumping in right along with them.

The partnership between Lagunitas and CannaCraft, whose teams were introduced in 2017 by their respective events people, seemed like a no-brainer. With a long history of cannabis advocacy, Lagunitas is known for starting brewing parties at 4:20 and being forced to rename a beer called Kronik, because it was too close a nod to an illegal substance. (They cheekily renamed it Censored.) “It was just a meeting of the minds of two companies with very similar cultures,” says Tracey Mason, CannaCraft’s chief strategy and innovation officer.

RELATED: Cannabis Is Emerging As An Entirely New CPG Category

The day the two companies came up with the idea for Hi-Fi, it was too early for beer, so they were all drinking Hoppy Refresher, Lagunitas’ new nonalcoholic, IPA-like sparkling water. Having experimented before with cannabis terpenes, the partners got to thinking, Why not just infuse the water? They would go on to develop two Hi-Fi Hops varieties: one with 10 milligrams of THC and no CBD, the other with five milligrams each of THC and CBD. But it wasn’t so easy. Cannabinoids don’t like to stick to water, and the flavor is tricky. There were a lot of prototype tries. “Before you’d go, you’d pick the direction you were going to spit so you didn’t spray on someone’s face,” says Marshall. “We tasted a lot of yucky stuff along the way. There was one version that reminded me of gargling old salmon.”

But eventually they got it right. “It was instant,” he recalls. “The caveman brain said, Oh! I’m going to finish this one.” 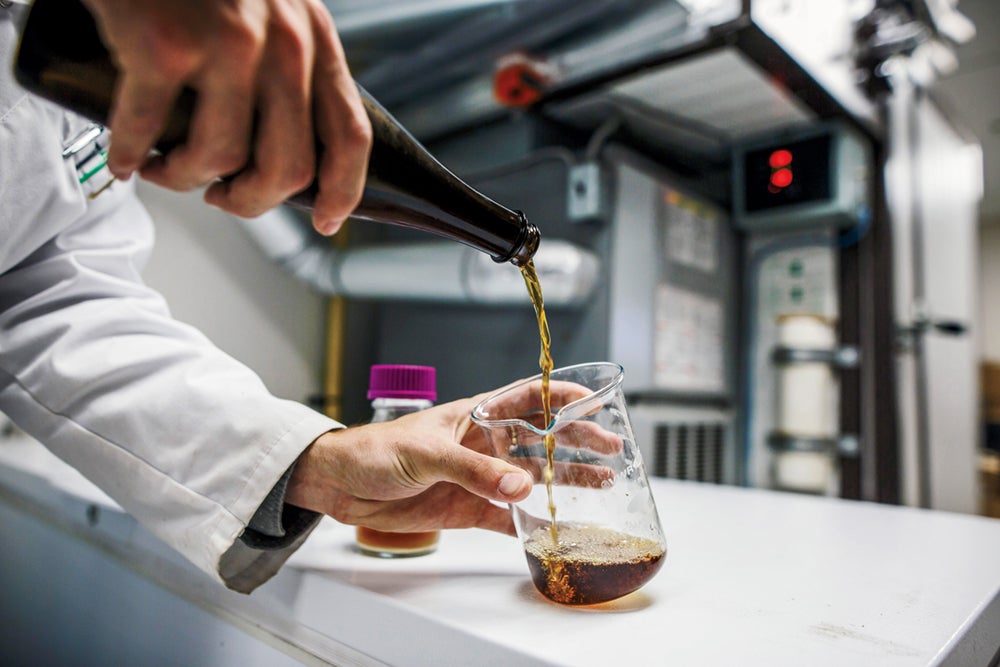 Heineken is not the only beer giant wading into the weedy, hoppy waters. Constellation Brands, the parent company of Corona, invested $4 billion last year in Canopy Growth to develop pot-infused beverages and other products. In December, Anheuser-Busch InBev, the multinational brewer famous for Budweiser, partnered with Tilray to research nonalcoholic cannabis drinks in Canada, a deal worth $100 million. Meanwhile small startups are already getting products on the market, like Tinley Beverage Co.’s sativa-infused tonics and Ceria Brewing Company’s cannabis beer.

Not to be left out, House of Saka winery in Napa Valley makes a THC-and-CBD-infused wine -- a still and a sparkling rosé. Each glass contains a microdose of five milligrams of THC.

Despite all the activity, there are a few speed bumps ahead. Regulators are still figuring out what to allow with such drinks -- the ingredients they can contain, and how they’re sold. One big question: Would federal legalization mean that these new beverages could be offered at bars and restaurants alongside their alcoholic cousins?  “On-site consumption is a challenge,” says Jamie Schau, international portfolio manager at Brightfield Group, one of America’s top cannabis market research firms. “Especially for THC, that’s gonna be a big hurdle to get past, because there’s still a lot of stigma in the cannabis industry.”

But overall, Schau also sees great potential. “There’s a lot of room for this market to supplant alcohol to some extent,” she says.

RELATED: 3 Cheers For The Rising Stars Of Cannabis

To Schau’s point, a new study suggests that many Americans may be up for switching from booze to pot. Analyzing online behavior, scientists at Syracuse University and the University of Georgia found that after states legalize marijuana, searches for alcohol drop 11 percent, while searches for marijuana rise 17 percent. Market data also suggests that members of Gen Z drink up to 20 percent less than millennials. “I genuinely think there’s a major backlash against pharmaceuticals, against big alcohol, even against tobacco,” Schau says. “When you can put something like [cannabis-­infused beverages] into a social situation and call it all-natural and plant-based and non­addictive and still achieve the same effect [as alcohol], you can imagine how alluring that is.”

CannaCraft’s Mason, who came to cannabis from nearly 30 years in the wine-and-spirits industry, notes that these new drinks make getting high just as acceptable as sharing a bottle of wine or a six-pack -- and in that way, they’ll do more to bring marijuana into the mainstream than vapes ever could. Priestley Pring, director of marketing for Rebel Coast, a weed-infused wine, agrees. “Our wine would be perfectly appropriate at bars and restaurants,” he says. “Cannabis beverages are definitely the way of the future.”

Lagunitas’s Marshall is bracing for that. He’s philosophical about the competition in the market he sees as about to explode. “You hope that when the dust settles, you’re the one people come back to,” he explains. “But this is all part of good entrepreneurship. I say bring it on.”

How Regulations For Edibles Vary Across the Country