THCA And THC: What's The Difference?

THCA doesn't get one high, but there is a relation: THCA is the precursor to psychoactive THC effects.

By Weedmaps News November 1, 2019
This story originally appeared on Weedmaps

Surprise! You’re just not going to get high by eating that freshly picked weed. At all. When cannabis is harvested and raw, no matter how much potential resides within, there is practically none of marijuana’s most famous and intoxicating cannabinoid, delta-9-tetrahydrocannabinol (THC). There is, however, a wealth of tetrahydrocannabinolic acid (THCA), an inactive compound found within the trichomes of living cannabis plants.

So, if someone ever asks you “what does THC stand for?” don’t confuse the two similar terms. As you’ll soon discover, they are vastly different in both chemical structure and how they interact with the human body.

THCA is a cannabinoid that until recently has been closely compared to THC. Though THCA doesn’t get one high and THC certainly does, there is a relation: THCA is the precursor to psychoactive THC effects.

So why does THC get us elevated and THCA doesn’t? The reason is due to the three-dimensional shape of the THCA molecule. It is a larger molecule that doesn’t fit into our cannabinoid receptors, specifically the CB1 receptors. A cannabinoid must fit into a body’s CB1 receptor in order to have an intoxicating effect at all.

RELATED: The 7 Most Potent CBD Strains

It’s commonly assumed that during the marijuana plant’s growth process that it is ramping up THC levels until ripe for the picking, but the primary cannabinoid being produced is actually THCA. How does THCA become THC?

The simplified answer is through heat and light -- or the process of decarboxylation. Heat removes a carboxylic acid group of atoms from THCA, converting it into a molecule and altering the THC chemical structure, thus becoming the perfect shape to fit into our endocannabinoid system (ECS) CB1 receptors that run throughout the central nervous system, producing the elevated experience.

The non-intoxicating effects of THCA are a big part of the reason that fresh, raw, unheated cannabis is a superfood. You may have heard of juicing cannabis or adding raw cannabis to smoothies for health enhancement. There’s good reason.

Like other superfoods, including avocados, kale, Greek yogurt, green tea, and garlic, raw cannabis has potential to ease arthritis, chronic pain, fibromyalgia, and other ailments.

THCA is believed to offer an assortment of medicinal benefits, and is commonly used as a nutritional supplement and dietary enhancement for its:

Most cannabinoids, including cannabidiol (CBD), cannabigerol (CBG), and tetrahydrocannabivarin (THCV), are in the acidic form (CBDA, CBGA, and THCVA) when cannabis is harvested. The unactivated forms of THC and CBD, along with other cannabinoids, have benefits themselves that we are still learning about. 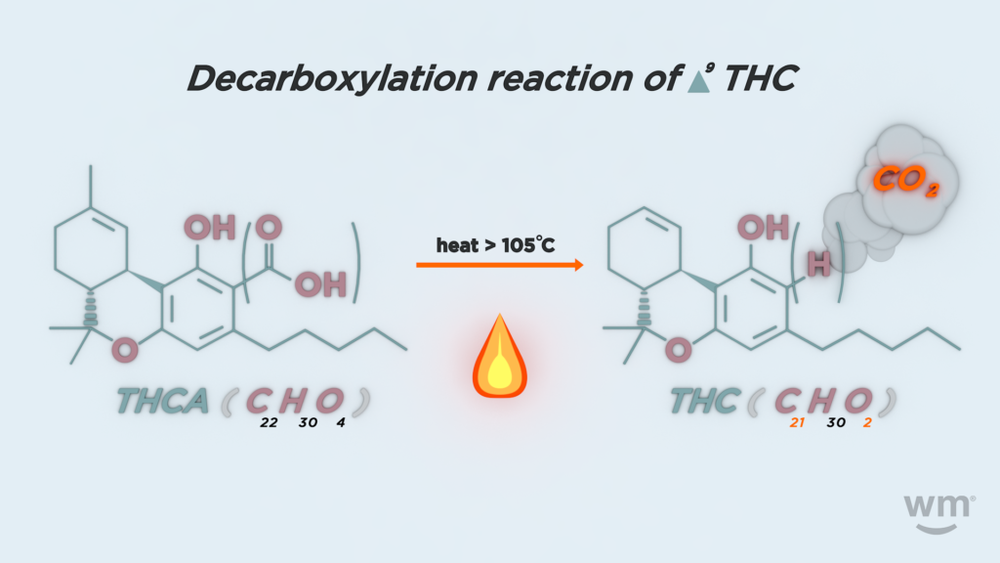 It’s only after these unactivated cannabinoid acids go through the decarboxylation process, though, that they become the cannabinoids we’re most familiar with and that most interact with our ECS.

The acidic precursors are considered “thermally unstable,” which is another way to emphasize that they will alter when exposed to heat. Because of this instability, the molecules lend themselves to several different methods of decarboxylation.

RELATED: So What Is CBG, Anyway?

Here are the most common ways that weed is decarboxylated:

Sunlight conversion: THCA converts to THC in varying degrees through exposure to heat or light. If a cannabis plant sits in the warm sun for an extended period of time, its THCA molecules will slowly convert to THC.

Smoking: When a flame is used to smoke dried, cured bud, a high degree of heat is applied in a short amount of time, resulting in the rapid conversion of THCA to THC. However, not all THCA will convert and, though smoking is the most common way to enjoy THC’s effects, it’s not the most efficient.

Vaporizing: This is perhaps the most efficient way of decarboxylating ground nugs. When heated at a low temperature, the cannabinoids are converted and released. Continuing to increase the heat with each pull or sesh will make sure that the prime amount of THCA is converted into THC and binds to CB1 receptors.

Vape pens: Even more efficient than vaporizing flowers is the use of already decarboxylated cannabis distillate found in preloaded vape pens. Since the THCA is already mostly converted to THC and the following vaporization takes care of even more, this is a good, efficient method of taking in intoxicating cannabis.  Be sure you’re using a reliable brand of vape pen, for safety’s sake, and do your best to purchase products that are recyclable.

RELATED: Why THCV Might Be The Next Big Thing In Weed

Cannabis concentrates:  By isolating the THCA content from a cannabis plant, THCA crystalline can be extracted and consumed in dabs. Similar to vaporization, decarboxylation transpires rapidly when using the dabbing method, breaking down the THCA into active THC. In its pure form, THCA crystalline has little flavor or aroma, as most cannabis extractions aim to strip away the terpenes and flavonoids to isolate the cannabinoids. But many producers reintroduce cannabis-derived terpene blends back into the concentrate. Not only does the addition of terpenes improve the flavor, but these distinctively aromatic plant molecules also work together with cannabinoids to produce entourage effects that enhance the therapeutic potential of cannabis.

Conventional oven: When making edibles, you’ll want to activate, or decarboxylate, the weed before adding it to the butter, oil, or other medium. When weed gets ground up, spread evenly across a baking sheet that’s lined with parchment paper, and is baked at 230 degrees Fahrenheit, or 110 degrees Celsius, for 30-90 minutes (depending on the bud’s moisture content), it slowly converts most THCA into THC.

Whether cannabis is smoked, eaten, vaped, or juiced raw, understanding the plant’s properties and how and why they interact with our bodies the way they do is crucial in achieving the desired effects and avoiding adverse side effects. Cannabis molecules each have their own benefits and as raw cannabis is further studied, we can rest easy knowing that it’s safe to integrate it into a healthful diet.

Will Stoner Culture Survive In 2022?

Want to Roll a Perfect Joint? These 6 Things Will Help