The Wireless Landscape After T-Mobile and Sprint Merge

After a tight FCC vote, the organization's commissioners gave the merger an 'OK,' approving it 3 to 2.

While numerous state lawsuits still stand in the way of T-Mobile's unendingly fraught merger with Sprint, the two wireless carriers cleared their last federal regulatory hurdle when the FCC formally approved the merger to whittle the big US cellular network providers from four down to three. It was a tight vote, with FCC commissioners voting 3 to 2 to OK the merger; the Justice Department had already approved the deal.

FCC Chairman Ajit Pai has previously signaled his support for approval after agreeing to revised terms including the sale of Sprint subsidiary Boost Mobile, specific 5G milestones and the creation of an in-home broadband product, which T-Mobile floated as a boon to regulators. 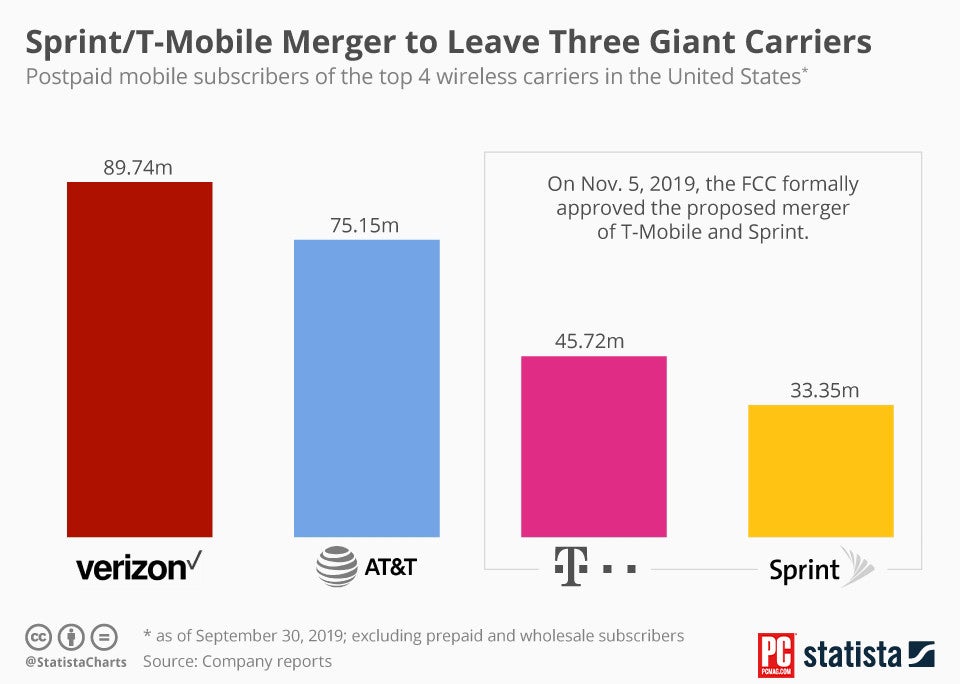 Despite plenty of pricing loopholes and questions over how the merger will affect carrier competition in a consolidating market, the pendulum has definitively swung toward approval. Based on postpaid (monthly billed) mobile subscriber numbers, the post-merger wireless market will be dominated by three major carriers that will be matched about evenly.

Related: How to Choose the Right Mobile Service for Your Business

Sprint doesn't break out the Boost Mobile subscriber number, but it's estimated to be around 7 to 8 million. Even subtracting that, the combined carrier will still have more than 70 million subscribers, closing the gap with Verizon and AT&T just as the race to 5G reaches its pivotal rollout phase.

While PCMag's nationwide network testing indicates the merger would be great for 5G speeds, the deal will almost certainly reduce price competition and ultimately drive up costs for consumers. FCC commissioner Jessica Rosenworcel, who voted against the merger, said in her official statement that "Shrinking the number of national providers from four to three will hurt consumers, harm competition and eliminate thousands of jobs ... the T-Mobile-Sprint merger will end a golden age in wireless."

Verizon Strips Down Its Logo in Lukewarm Reboot

These Are The Ten Best Performing Stocks In November 2021

Do not water it with your Christmas bonus: The 'Yes' and 'No' of what to do with that little money