Chart: Year-To-Date Cannabis Investment Activity Up 40 Percent Over 2018, But It's Slowing

Are marijuana stocks still all the rage, or are they starting to level out as we head into 2020?

By Maggie Cowee November 20, 2019
This story originally appeared on MJBizDaily

Cannabis industry capital investment in 2019 hit $10.4 billion through Week 40 -- a 40 percent increase over 2018 -- but the previously hot investment activity has cooled in recent months and is now running at what one analyst called a more “normal” pace of growth. 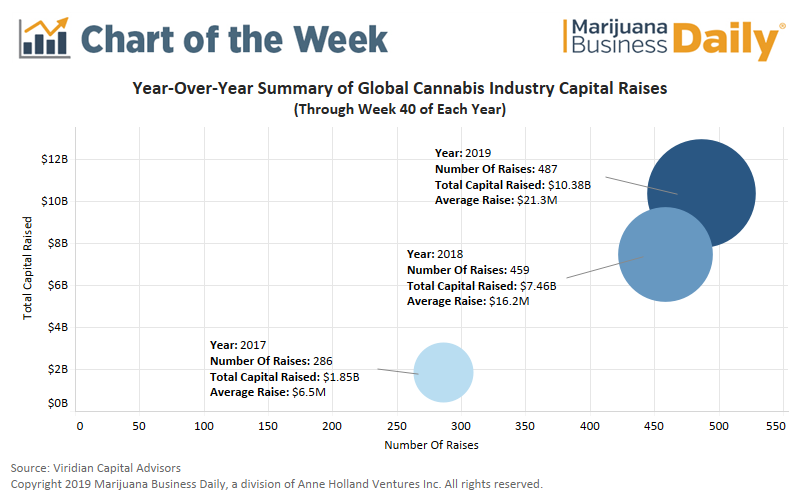 This comparison of public and private capital investments from 2017 to 2019 -- along with other new marijuana industry data and analysis -- is available in the November update to the 2019 Marijuana Business Factbook.

RELATED: Is Cannabis A Better Investment Than Cryptocurrency?

During September 2019, the number of raises was up over the same month in 2018, but the average size and total capital raised were down year-over-year.

The slowed investment comes along with recent layoffs across various sectors of the cannabis industry -- including 20-25 percent workforce reductions by the Hexo Corp., Pax Labs and Weedmaps.

But analysts say slowed investment isn’t unexpected after a period of rapid growth.

RELATED: Amateur Investors Are Bullish About Cannabis. That Has The Pros A Little Worried

“Current conditions are closer to normal; the prior year or two of almost unlimited capital to burn without showing profits was abnormal,” said Craig Behnke, equity analyst for MJBizDaily’s Investor Intelligence.

Behnke noted that many cannabis companies, even those that have raised significant amounts of capital, have yet to produce earnings or cash flow.

Rather than raising cause for concern, the slowdown is a natural part of the investment cycle.

“Investors being more judicious and pressing companies to focus on profitability is actually a sign of a healthy, rational capital market,” he said.

And the competition for resources forces companies to run more efficiently, as evidenced by the layoffs.

Another factor playing a role in the investment slowdown is the type of investors entering the space.

As marijuana investment has become more mainstream, traditional investors have increasingly brought their money to the table.

With traditional players come traditional expectations -- those that rely on tangible results.

Here’s what else you need to know about cannabis investment: