A new law in the state has given companies a chance to expand production, operations and retail footprints.

A new Florida law repealing a ban on smokable medical marijuana products has given the state’s MMJ market a shot in the arm, prompting large multistate companies to aggressively expand their production, operations and retail footprints.

That has injected fresh competition into one of the nation’s fastest-growing medical cannabis markets and loosened the grip of the state’s largest MMJ company.

Some multistate operators possibly have overpaid to get into Florida’s market, with reports of some acquisitions exceeding $40 million -- including a $53 million transaction by MedMen.

While smokable flower clearly has figured prominently in many firms’ returns on investment strategies, one expert questions whether their investments will pay off anytime soon given their current limited market shares in Florida.

RELATED: What This Medical Marijuana Company Can Teach You About Getting Buzz

Tallahassee-based Trulieve still controls nearly 52 percent of the sales in the nonsmokable marijuana market, but its share of smokable products has gradually declined from 57 percent in mid-July -- when the state started publishing the data -- to less than 45 percent. The smokable flower ban was lifted in March.

Trulieve’s smokable share declined to as little as 35 percent during one recent week.

But the company, which has a large cultivation capacity, might now be benefiting some from flower shortages across Florida.

Flower sales have provided more market opportunities and a larger profit potential and might help rebalance a market that Trulieve has largely dominated. 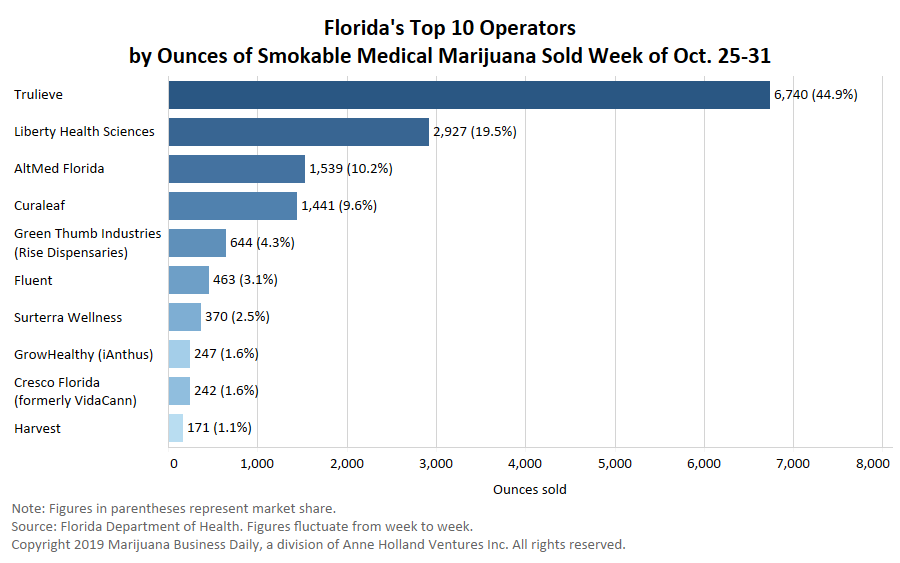 Florida’s medical marijuana operators also are eyeing another huge potential market down the road: recreational cannabis, although it’s uncertain if the issue will get on the state’s 2020 ballot.

Smokable products generate roughly $3.5 million-$5 million a week in sales in Florida, based on prices of $10-15 a gram, according to industry officials.

That works out to annualized sales of $200 million or more.

“While Trulieve has dominated the market due to their advantage in retail dispensary locations (and high sales per store),” he said, “their closest competitors are aggressively ramping up retail locations, market visibility and production, and are closing the gap on percentage of smokable product sales.”

Since March 21, when Trulieve was the first to sell smokable medical cannabis in Florida, the number of dispensaries in the state has shot up more than 70 percent, from 109 to 187 as of Nov. 1, according to weekly market updates published by the health department.

Trulieve, the leader in Florida with 26 dispensaries in late March, had increased that total to 38 dispensaries as of Nov. 1.

Sally Peebles, a partner with the Vicente Sederberg law firm in Florida, said that many companies -- known as medical marijuana treatment centers (MMTCs) -- were waiting for the smokable ban to lift before making large operational investments in the state’s MMJ market.

“I believe many MMTCs chose not to open up dispensary locations until flower became legal, as flower accounts for a majority of a dispensary’s revenue,” Peebles wrote in an email to Marijuana Business Daily.

Added Sharkey: “The cost of production is less (than other products), the margins are higher. And people who have been familiar with cannabis for years -- that’s the way they think about it (as a product to smoke).”’

“I imagine as more players enter the market, especially the multistate operators who can apply their years of experience in competitive markets out West, the Florida market may become more balanced,” she wrote.

However, the fact that Trulieve still controls half the nonsmokable market shows that some rivals are focusing primarily on flower.

Its six stores are selling mostly flower, a small amount of nonsmokable THC cannabis products and no CBD products, according to Florida health department data.

Then there’s Toronto-based Liberty Health Sciences, which currently has 19 dispensaries in Florida, up from 12 in late March.

Liberty sells nonsmokable products but has made its biggest mark in the smokable market and is now the state’s second-largest seller of smokable flower, with a market share of nearly 20 percent.

Liberty has succeeded, in part, through aggressive pricing that includes a cannabis flower product priced at $28 for 3.5 grams.

Sarasota-based Alternative Medical Enterprises (AltMed), which has nine dispensaries across Florida, is the only company to rival Trulieve in terms of sales per store and has garnered more than 10 percent of the smokable market.

Did Some MJ Firms Overspend To Get Into Florida?

Some MSOs reportedly paid $40 million or more for a vertically integrated license, which allows them to open as many as 35 dispensaries across the state. (Trulieve and Surterra won legal challenges against the state, allowing each company to open up to 49 dispensaries.)

Andrew Livingston, director of economics and research in the Denver office of Vicente Sederberg, has puzzled over the large amount of money some MSOs ponied up to acquire licenses without operating grows or stores in Florida.

He said MSOs that paid tens of millions of dollars might find it hard for their investments to pay off anytime soon, even with their aggressive efforts to enter the smokable market.

“It is important to remember that it takes millions of dollars on top of what they paid for the license to construct large cultivation facilities and dozens of stores,” Livingston said.

Other than Trulieve, all the medical marijuana companies in Florida still have overall market shares of less than 20 percent, according to state data. Most are in the single digits.

Making major inroads in a market where there’s an entrenched, dominant player is difficult, Livingston noted, especially if that company has a strong brand, the best locations and maintains a loyal customer base.

A Pharmacist Defends the Use of Delta-8