Drinkables Are The New Edibles. Where, When And How Can You Get Them?

There's an influx of new cannabis-infused drinks, so here's everything you need to know about them all.
Next Article Add to Queue


Why do consumers love drinkable cannabis? Let us count the ways. It's discreet, it requires no special equipment, it tastes good, and it's a familiar and safe delivery system.

Weed-infused drinks make up one of the fastest-growing segments of the cannabis market. It's a sprawling category that includes tinctures to mix with cocktails; non-alcoholic alternatives to wine, beer, or champagne; wellness beverages that can lull you to sleep or take the place of aspirin or ibuprofen after a strenuous game of hoops or tennis; and sparkling sodas that are as appealing to millennials as they are to baby boomers who aren't comfortable lighting up.

Here are answers to some common questions about cannabis tonics.

Why Are There So Many Drinkables?

Bottoms up! Straddling the lines among intoxicating drinks, wellness shots, and liquid medicine, drinkable cannabis is taking off. According to BDS Analytics, which tracks cannabis trends, there were 88 beverage brands on the market in mid-2019; that's 19 more than during the same time period in 2018. In 2018, beverages made up 6 percent of the total edibles market in the United States. That percentage is rising steadily and BDS predicts that by 2022 canna-beverages, including THC and cannabidiol (CBD) products sold in dispensaries and non-THC drinks sold in supermarkets, drugstores, convenience stores, and the like could be a $1 billion market.

A lot of familiar names are behind this boom. Mike Tyson has launched Dwiink, a line of CBD-enhanced water and fruit-flavored beverages whose name is a playful wink to his trademark lisp. Big booze distributors are investing heavily in weedy drinks: Heineken-owned Lagunitas offers Hi-Fi Hops, a pair of nonalcoholic, zero-calorie beverages that come in two dosages, 10 milligrams THC, or 5 milligrams each of THC and CBD per bottle.

Meanwhile, the maker of Arizona Iced Tea has signed a licensing agreement with Dixie Brands to manufacture and distribute canna-drinks under the Arizona label.

Other companies are expanding into the drinks space, such as Weller, a manufacturer of functional snacks. The Boulder, Colorado, company in 2019 launched a line of CBD-infused sparkling water flavors it calls W+ and a CBD drink mix. 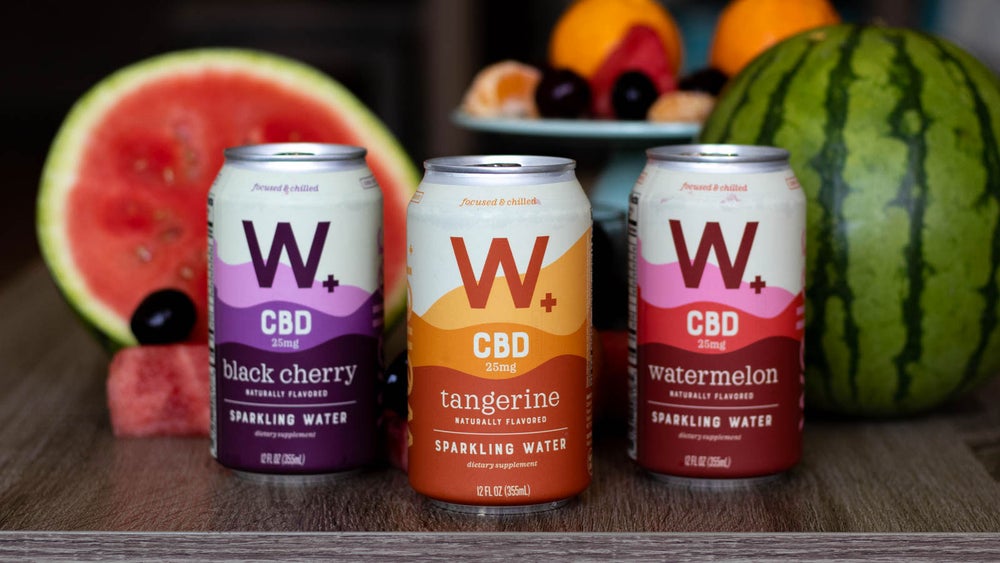 W+ is a line of fruit-flavored, BD-enriched sparkling water from Colorado-based Weller, a maker of functional snacks.
Image credit: Courtesy of Weller

RELATED: 3 Cheers For The Rising Stars Of Cannabis

Why Did Cannabis Drinks Take So Long To Hit The Market?

Developing a beverage infused with CBD or THC is a lot more complicated than mixing gin with tonic. For one thing, cannabinoids are hydrophobic -- meaning they repel water. Drop cannabinoids into water and they'll float to the surface rather than dispersing evenly.

It's taken cannabis chemists a lot of hit-or-miss experiments to overcome this hurdle. SōRSE, a Seattle-based beverage-tech company, is one of the innovators in the field, developing a method to convert cannabis oils into a water-soluble emulsion that has no cannabis taste or smell and that disperses uniformly throughout liquid. The technology is proprietary and Michael Flemmens, SōRSE's vice president of science, will say only that the company uses food-grade components that have already been approved by the Food and Drug Administration (FDA) as GRAS, or generally recognized as safe.

The company uses the ingredients to produce THC and CBD-infused products that include Happy Apple, a sparkling, cannabis-infused apple beverage; Utopia, fruit-flavored sparkling water with 10 to 100 milligrams of THC per 12-ounce bottle; and Vertus, an alcohol-free sparkling bubbly that's meant to be an alternative to sparkling wine or Champagne, and which comes in dosages of 50 or 100 milligrams of THC.

Predictability is one of the advantages well-formulated THC-infused beverages have over edibles, said Niccolo Aieta, Ph.D., founder and Chief Technology Officer for Spherex, a Denver-based company that develops cannabis concentrates and whose products include Phyx, a sparkling water brand with microdoses of THC and CBD.

“Cannabis drinks are fast-acting, taking effect within minutes as opposed to several hours with edibles," he said. "That allows users to better control their experience and gives them an overall better experience.”  The Phyx website advises users that, on average, they'll feel the drink's effects in 10 minutes, with the buzz hanging around for about an hour.

With 2.5 milligrams of CBD and 2.5 milligrams of THC, “Phyx is the equivalent of a nice glass of white wine,” Aieta said. “It's a slight elevation of your daily mood, good for unwinding, relaxing and socializing with friends. For people who are canna-curious, it's a great way to explore and experiment.”

Flemmens strikes a similar note. “Our biggest seller is Happy Apple with 10 milligrams THC,” he said. “We suggest that inexperienced cannabis users try it on a Saturday night at home, not a Friday night at a party. Drink half the bottle, put it in the fridge and wait half an hour. If you like the experience, you have two choices. You can stay where you are or go for the rest of the bottle.”

The woman-owned and -operated Humboldt Apothecary takes an herbalist's approach to cannabis by formulating tinctures with medicinal herbs to work in concert with the full-spectrum cannabis. The blends of botanical ingredients with cannabinoids not only aid a more rapid onset, according to the company, but also help to achieve certain effects: a peppermint formula for relief of congestion, passionflower and lavender for sleeping, or gingko and rosemary for a brain boost. Humboldt Apothecary suggests using a couple of drops in a mocktail, much the way you might add bitters to a traditional cocktail.

As for CBD drinks, Scott Van Rixel, CEO of Bhang, which makes a line that includes Wellness Beet Shots with 25 milligrams of hemp-derived CBD, thinks of these as wellness, not recreational, products. 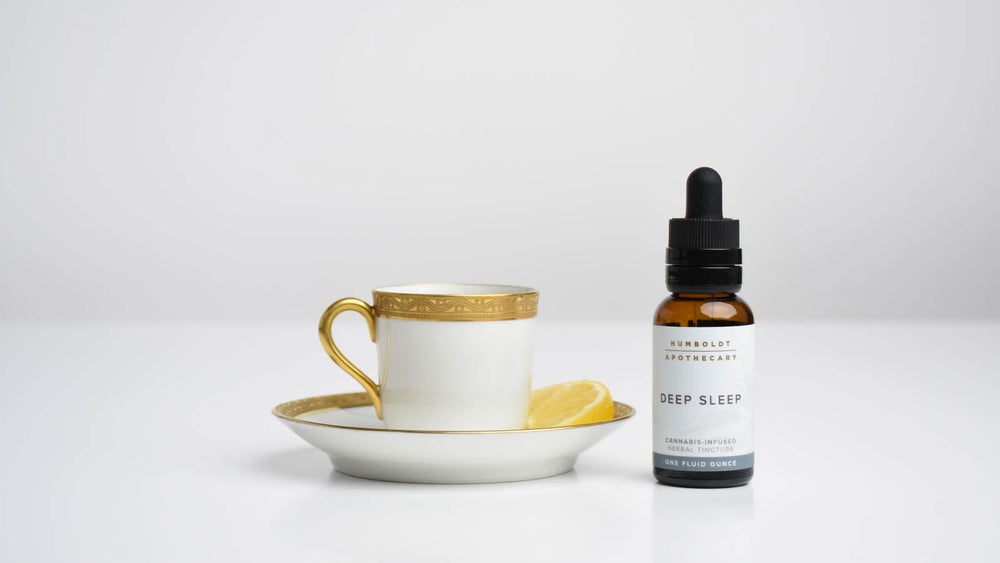 “They're making accessible the benefits of a plant that used to be a part of people's lives on a daily basis,” said Van Rixel, who noted those benefits include relaxation, better sleep, relief from irritability, or inflammation. Van Rixel suggested that consumers might want to think of CBD beverages the way they do energy drinks: Find the dose -- a single shot in the morning or several throughout the day -- that works best for them.

RELATED: What Millennials Want In Weed

Where Can You Buy These Products?

That's complicated. Very complicated. Regulations are an ever-changing mess, with state and federal rules sometimes contradicting each other. The FDA published a statement that noted the agency is aware that products on the market are adding CBD to foods or labeling CBD as a dietary supplement. However, the agency advised that, “Under federal law, it is currently illegal to market CBD this way.”

Consumers can start with a product's website for “where to buy” info. Some drinks are being tested in one or two cannabis-friendly markets, such as Colorado or Washington, or in Canada, where cannabis is legal nationwide.  Dispensaries in states where marijuana is legal also are carrying an ever-expanding selection of beverages with THC and CBD.

Many CBD drinks can be shipped to all 50 states. Thanks to the passage of the 2018 Farm Bill, some states allow beverages with hemp-derived CBD to be sold in groceries. For example,  Queen City Hemp CBD Seltzer, which was launched in 2017 and was the first CBD seltzer in the U.S., is sold at retailers in 26 states, including several conservative states such as Alabama, Texas, and Georgia. However, the sparkling beverage cannot be sold in cannabis-friendly California because of complex state regulations.

Queen City's founder, Nic Balzer, who's part of the U.S. Hemp Roundtable, echoed the views of others in the canna-beverage biz when he said, “There are a lot of regulatory challenges and we're hopeful that the FDA will make a ruling soon that will clarify these laws.”

What Is Delta-8 THC?

Cannabis and HPV: Friend or Foe?

3 Cannabis Cocktails to Try for the Holidays