Cannabis Is Taking Away From Beer Market Share Following Legalization

The volume of beer sold in Canada declined 3% in the first 11 months of 2019 compared to the same period in 2018, according to new data from provincial alcohol boards and brewers.

The figure underscores how recreational cannabis has captured some of the beer market – and validates concerns among Canadian brewers who long feared the impact of adult-use marijuana on their sales.

RELATED: The Stories Behind Cannabis Companies And Their Partnerships With Mainstream Businesses

In May 2018, months before the first legal sales of adult-use marijuana took place, industry group Beer Canada asked the federal government to raise its proposed cannabis tax to level the playing field.

According to Beer Canada, 19.57 million hectoliters (hL) of domestic and imported beer was sold in Canada in 2019 through November, down from 20.18 million hL over the same time period a year earlier.

In a note to investors, Cowen analyst Vivien Azer said the 3% drop in beer sales is far worse than the trends seen between 2014 and 2018, when beer sales volume declined an average 0.3% annually.

Last year saw the biggest domestic beer decline in at least six years, but that was only partially offset by a small increase in imported beer sales by volume, Azer noted.

“I think it’s clear there’s some impact (of legal cannabis on beer) given how considerable the drop-off has been this year,” the Wall Street analyst told Marijuana Business Daily.

Rise in cannabis sales a concern

Cannabis sales in Canada got off to a slow start in October 2018 but have improved with increased product selections across most price points, more consistent inventory and ramped-up store openings in key markets.

From October 2018 through September 2019, just over 900 million Canadian dollars ($691 million) worth of cannabis products were sold across the country. 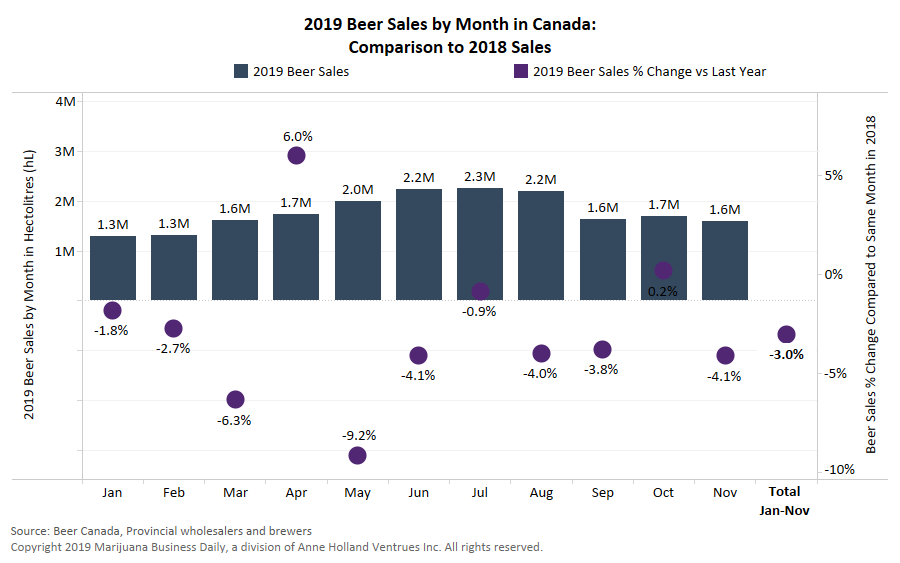 “It’s a big reason why OILS (the company’s ticker symbol on the Canadian Securities Exchange) has been focused on developing and protecting intellectual property around the extraction and distillation of cannabinoids,” he said.

Prompted by both the fear of cannibalization and enticement of new revenue streams, some alcohol companies made an early push into legal cannabis.

Other cross-sector deals include:

RELATED: 'Who Gets To Decide Who Has Access To A Legal Market?': Eaze Director Talks Big Tech Limitations, Industry Trends

“This is why alcoholic giants have swooped in during recent years to buy/invest in cannabis companies,” he said.

More data can only help the trend of cross-sector investments, as alcohol companies sit on the sidelines awaiting additional validation and opportunities.

“The next big wave is consumer packaged companies once Cannabis 2.0 brands gain some traction,” Malik said.

Infused cannabis products started trickling into the Canadian market in December, but wider distribution isn’t expected until later this quarter.

Many cannabis beverage joint ventures with some of the biggest brewers have yet to launch a product despite such products being legal, she said.

Matt Lamers is Marijuana Business Daily’s international editor, based near Toronto. He can be reached at mattl@mjbizdaily.com.