Illinois Demand For Cannabis Is So High, Recreational Shops Close Due To Shortages

The losses in possible sales due to marijuana product shortages is easily in the millions of dollars, one expert estimated.

Illinois cannabis shops have had approximately a week to sell recreational marijuana since the state began allowing it Jan. 1, and demand has proven so extreme that -- despite enjoying about $11 million in early sales -- some retailers have cut off adult-use customers temporarily in order to conserve inventory.

"The demand in Illinois is every bit as large as anyone could have suspected," said Zachary Zises, owner of Dispensary 33 in north Chicago.

"Now, all these people that have the legal right to buy cannabis cannot do so, and from my perspective, that's incredibly disappointing."

RELATED: Why The MLB's Decision To Remove Marijuana From Its Banned Substances List Matters

Zises is among a handful of independent marijuana shop owners that have made the difficult decision to stop serving recreational cannabis customers. He estimated that decision has cost him $100,000 per day that he's had to turn away rec MJ buyers.

His store was closed to adult-use marijuana consumers over this past weekend, and he said he might have to stop selling recreational products more days in coming weeks, depending on his inventory levels.

The main question, Zises said, is when he'll get a shipment of product to restock his shelves: That should be at least once a week, but lately, wholesalers have shown themselves less reliable. 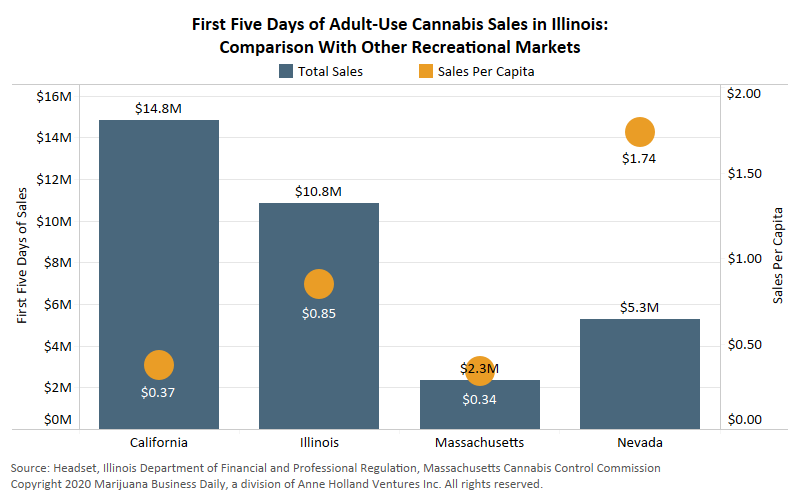 "It literally varies depending on the delivery schedule," he said. "It's literally a real-time decision for us, based on daily supplies.

"We are doing our best to buy as much product as we can on the wholesale market, but we're having tremendous difficulty doing that."

Pamela Althoff, executive director of the Cannabis Business Association of Illinois (CBAI), said some of the difficulties this month have been a "perfect-storm scenario," with factors that include:

One part of the problem, Althoff said, is that for sales purposes, retailers have had to designate all marijuana inventory upon receiving it as either medical or recreational since mid-December -- a fairly new regulation that the industry was informed about only last month.

Trying to balance the appropriate medical inventory levels -- all licensed marijuana shops are required to have at least a 30-day supply for their MMJ patients on hand at all times -- with a guesstimate of how much rec inventory will sell has been one of the burdens of the first week, Althoff said.

Regardless, the losses in possible sales due to product shortages is easily in the millions of dollars, Althoff estimated, just based on the $11 million in adult-use marijuana sales that have already taken place.

"As prepared and as experienced as we are, it's a highly regulated industry, and we're going to run into a few speed bumps," Althoff said.

One retailer that hasn't had to deal with shortages is vertically integrated PharmaCann, which runs two cultivation centers in addition to its four storefronts, three of which have been selling rec marijuana since Jan. 1.

Unruh also estimated that PharmaCann's three shops have been serving 700-1,100 rec customers per day since the launch.

"These problems were all anticipated," Unruh said of the hiccups surrounding rec sales in Illinois.

John Schroyer can be reached at johns@mjbizdaily.com