Recreational marijuana sales in Colorado were up 16 percent in 2019.

Sales of adult-use cannabis in Colorado eclipsed $1.4 billion in 2019, a record for the state that likely was propelled by new customers entering the market.

Recreational marijuana sales were up 16% in 2019, marking the first time that sales growth accelerated from year to year in any adult-use cannabis market, not just Colorado’s.

Sales in mature adult-use markets such as Colorado, Oregon, and Washington state reliably increase from year to year, but the rate of change drops as time goes on.

RELATED: How To Stay Atop In A Crowded Retail Market

Liz Connors, director of analytics at Seattle-based point-of-sale data provider Headset, suggests that the growth in Colorado’s industry comes from an increase in unit sales driven by new consumers coming into the state’s marijuana market. She gets there through a process of elimination.

Broadly speaking, there are two ways to increase sales:

According to point-of-sale data provided by Headset, combined average item prices in Colorado’s adult-use cannabis market were roughly flat from 2018 to 2019. Total unit volume, however, grew by 15% year-over-year. 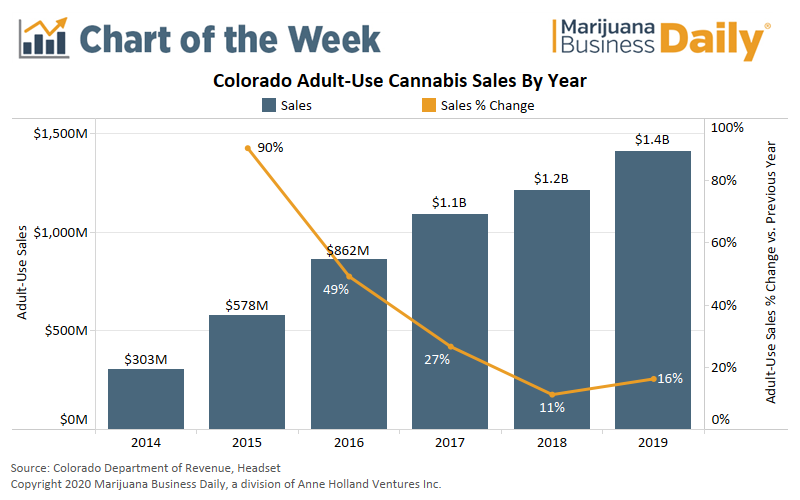 A combination of the following can drive an increase in unit volume:

Headset’s data shows that in Colorado’s adult-use market, the median number of trips cannabis consumers are making to a rec store over a six-month period also remained stable from 2018 to 2019.

Headset’s data also shows the average number of items purchased per trip by Colorado cannabis consumers held steady over the previous year, leaving the increase in unit volume to be attributed to new consumers entering the market.

However, another key question emerges: Who are these new consumers entering the market?

While there’s no definitive answer, data suggests consumers from Generation Z – those born in 1997 and later – and consumers who continue to transition out of the illicit market and into the licensed, legal channel are contributing to the growth.

RELATED: States That May Legalize Weed In 2020

Gen Z – especially those born and raised in Colorado – are unique in that they came of age in an era of legal marijuana, and many don’t attach the same stigma to cannabis that older generations do.

This has led to significantly higher marijuana consumption rates among members of Gen Z relative to the national average.

While most of Gen Z are not yet of legal cannabis-purchasing age – the oldest members of Gen Z are now 23 – data from Headset shows that Gen Z accounted for 6% of overall spending on adult-use cannabis in 2019 – far outpacing their representation in the marketplace.

Another key trend identified by Headset in adult-use cannabis sales is the growing popularity of extremely low-priced products, an indicator that consumers might be moving out of the illicit market and into the legal industry.

Though it’s always challenging to measure how large the illegal market is in any state, the assumption has been that illicit-market activity continues because the legal channel is not meeting the needs of a certain subset of consumers – including lack of access to rec stores, high prices or an insufficient product selection.

Of these factors, price is likely the biggest contributor to the persistence of the illicit market. Rec stores are prevalent throughout much of Colorado, and product assortments in the state are among the most robust in the nation.

Eli McVey can be reached at elim@mjbizdaily.com

People Consumed A Lot of Weed on Election Night