Cannabis now employs a record-high of 243,700 Americans, Leafly finds in its 2020 Jobs Report

Leafly's new 2020 Jobs Report looks at cannabis industry growth in the last year. The industry has seen a whopping 100 percent increase in jobs since the company started recording data three years ago.

"Cannabis has essentially doubled its job count between January of 2017 and January of 2020. There is no other industry that comes close," says Leafly Editor-in-Chief Bruce Barcott.

RELATED: Has The Cannabis Bubble Burst? Experts Weigh In

It's been a turbulent year for marijuana companies experiencing a financial reckoning. Bringing these numbers and state-by-state challenges into context is crucial. While 15 percent job sector growth in 2019 is impressive for any industry, in 2018, that number was 65 percent for cannabis.

Barcott explains the findings in Leafly's fresh Jobs Report, its offering of hope for the industry, and how varying and nuanced the data can be from each state. 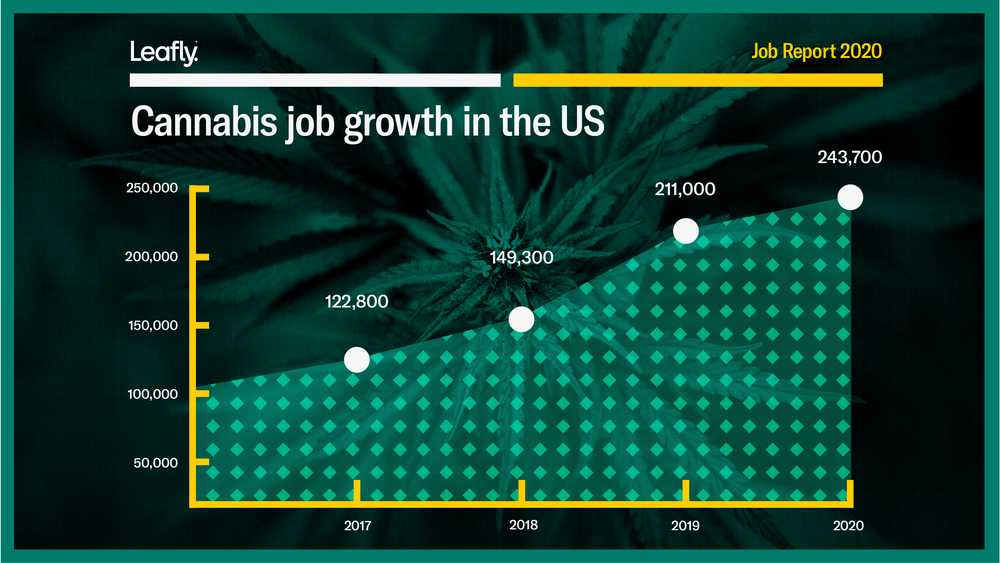 "We all have been seeing headlines about financing crunches and layoffs at a number of leading companies in the cannabis industry, including my own. But it's funny, at the same time this massive job creation engine that is the cannabis industry just keeps running strongly in the background," Barcott says. "We saw 15 percent year-over-year growth in the industry nationwide in 2019. What that meant for jobs is that we added 33,700 jobs over the past year nationwide. We're now at, our latest count, as of January 2020, legal cannabis is responsible for 243,700 jobs. Full-time equivalent jobs. I am not that surprised that the growth continued."

Key takeaways from the 2020 Jobs Report

"We saw massive growth in the state of Massachusetts, more than 333 percent growth as their retail adult-use market came online, adding more than 10,000 new jobs," Barcott explains. "The thing about Massachusets and a couple of other states, there is still a huge amount of growth left to happen there. There are 7 million people in Massachusetts. There are only 36 licensed stores. Washington state has about 7 million people as well, and we have 350 stores. Dan Adams at the Boston Globe said 60 more stores would be licensed in 2020. Again Washington state, 350 stores. A lot of consumers aren't yet served." 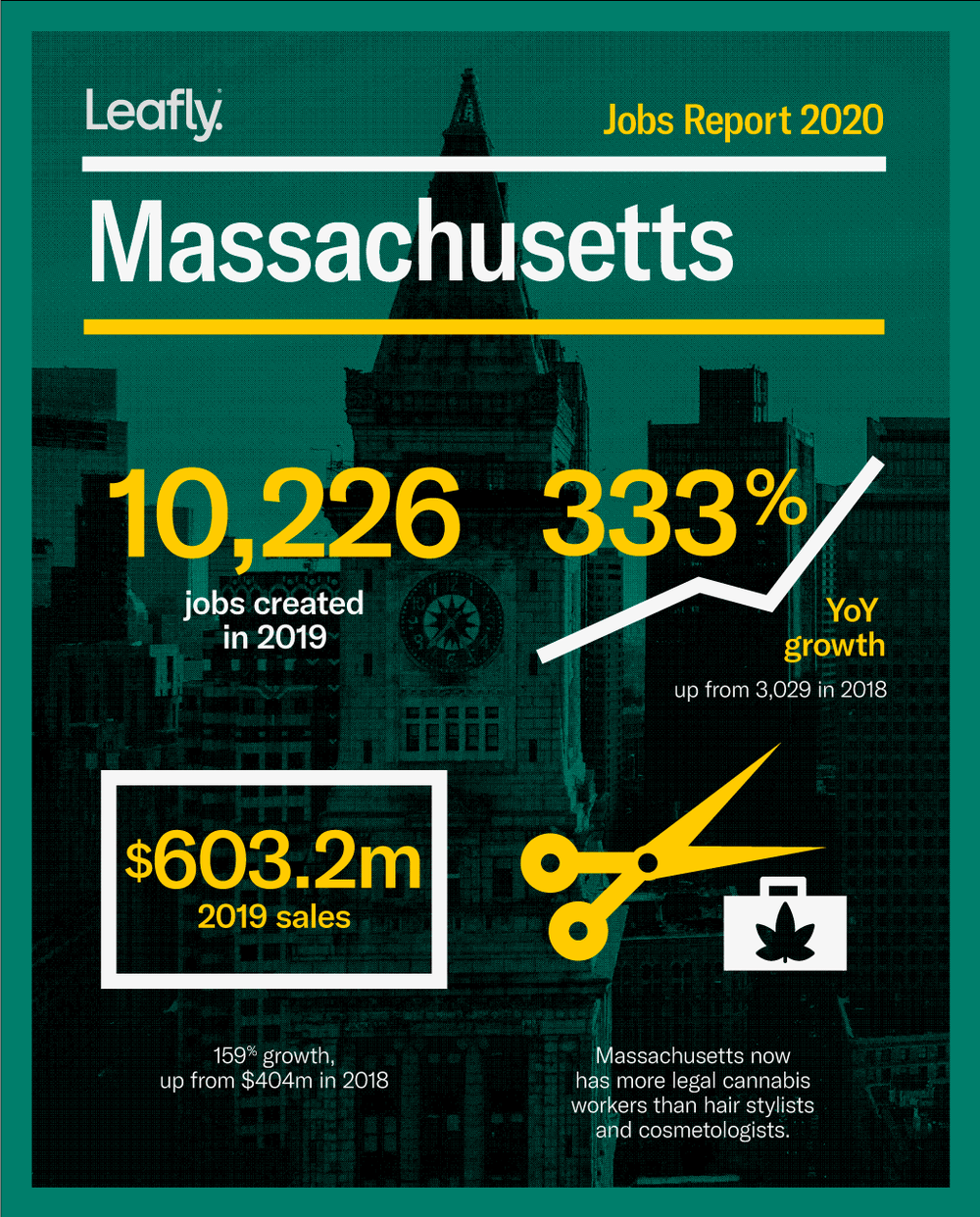 Leafly’s Annual Jobs Report is based on employment estimation methods from a range of cannabis data companies: MPG Consulting, Whitney Economics, BDS Analytics, NewFrontier Data, Vangst, and Headset, as well as the information that state regulatory agencies release. The data from each state is not created equal, though.

"We base our jobs count every year on a number of data points, mostly whatever we can get out of each state," Barcott says. "With Florida, you can watch their weekly or monthly patient count grow and grow and grow. Every time I double-check the jobs report, I have to go onto the state of Florida's website to get that number right, it's incredible. Their growth in the last year was helped by the number of patients, smokable flower sales for the first time spurred further growth. They actually now track cannabis flower sales, the latest figure they have 19,000 ounces per week. Every state tracks things differently. Some are just kinda cooky."

RELATED: Is It Time For Cannabis To Grow Up?

"Colorado has great data coming out of that state, they track both sales and revenue and the number of licensed cannabis workers. Every cannabis worker who comes near the leaf needs to get the license from the state, so that helps to give us a sort of ground-truthing in terms of how sales figures translate into actual jobs," says Barcott. "There are other states that have really great data say on the number of patients who visit stores, dispensaries, and then total sales at dispensaries. We use a few of those states to help adjust the number of average annual spend."

"One of the things that surprised us, was the strength of medical markets in states like Arizona, Oklahoma, and Florida, which tend to be more culturally and politically conservative," says Barcott. "But those are very strong robust markets. One in 20 residents now has a medical marijuana card in Oklahoma. More than 5 percent of the entire state."

RELATED: Idaho Residents Are Buying A Ton Of Cannabis In Oregon

Illinois has been a hot marketplace. In just a month since opening up for retail sales operations, it saw $40 million in sales. "They've also got a constrained product supply," Barcott says. "I don't think it's unreasonable to expect that volume of sales to continue as more licensed stores will come into operation. Illinois also has a chance to enjoy something like the 'Colorado effect.' When Colorado went legal, the fact that it was so centrally located made it convenient for visitors from many other states to come and have the experience. Illinois is so centrally located. There are 5 prohibition states surround it. In the stores that are near the state line, sales are the highest. I can't advocate it, don't transport it across states lines, it's entirely legal to come in and enjoy the legal."

"One of the things I've learned covering this industry for a number of years: Most people like staying on the legal side of the law. But then, the flip side of it is, most people won't drive across an entire county to buy legal weed. It's just, in an illicit market, if their seller is still in business, they're still in business for a reason."

"Ohio has been pretty quiet, that's a state with 12 million residents and only 48 dispensaries. They went from what we estimated was a $5 million market to a $50 million market in one year," says Barcott. "In 2020, we think Ohio could be about a $220 million market. That growth is amazing. One of the challenges we have, when you talk about Ohio, Ohio had $50 million in sales in 2019. But in terms of calculating how many people are employed, it's growing, so it's no longer a $50 million market."

RELATED: How California's Cannabis Industry Wound Up In Crisis Mode After 2 Years

2019 was an interesting year in California's cannabis industry. The state recorded $2.03 billion in legal sales in 2019 and still sits at the top of the list in the number of cannabis jobs at 39,804. But as a cannabis industry first-ever, California reported job losses in 2019. Leafly's report found the sunsetting of the state’s medical caregiver laws moved over 8,000 jobs from the legal to non-legal category. Barcott expects those jobs to return to legal status eventually. 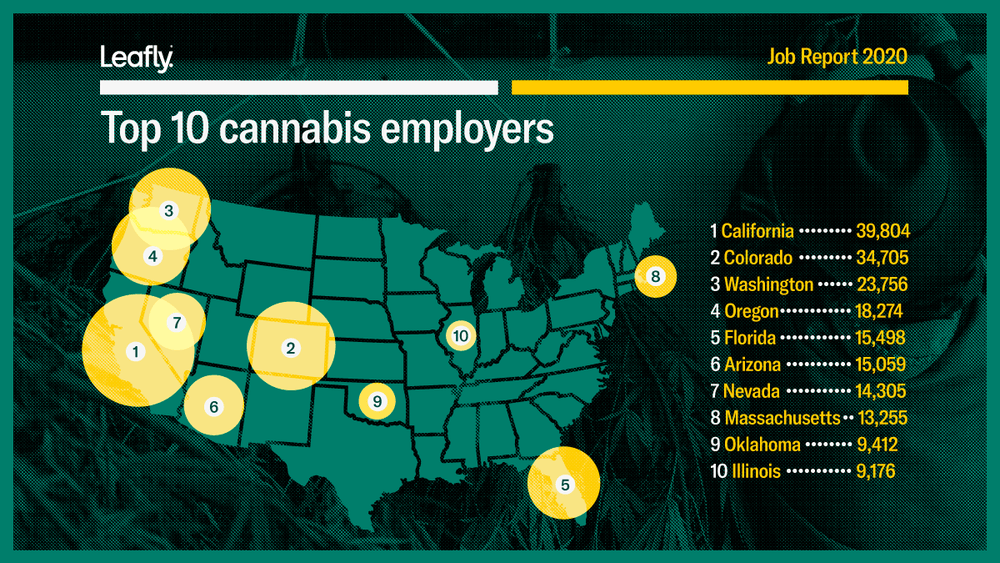 "The jobs report itself we specifically count only legal jobs. That definition really came into play in California because the law that protected caregiver operations, medical caregivers, sunsetted in 2019," Barcott says. "That meant that a lot of medical operations that either were legal or existed in the legal grey area, were no longer legal. So we had to take those sales off the table. And I think that combined with the tough regulatory environment that exists in California, that meant a number of people who were legal in 2018 were no longer legal in 2019. Those jobs may still exist. We expect those jobs to come back as more licenses are listed in California. Especially as more municipalities drop the draconian dispensary store bans."

Marijuana Sales in the Midwest Are Lighting Up

5 Things to Consider Before Investing in the Cannabis Market