To truly succeed, he says, you must be authentic.
Next Article Add to Queue

This story appears in the March 2020 issue of Entrepreneur. Subscribe »

Anthony Sullivan is usually on TV pitching OxiClean, the line of cleaning products he’s become famous for. (His marketing company produces its commercials, which he also stars in.) But now he’s also pitching his own CBD brand, and he wants people to know he’s all in. “It would have been easy for me to just white-label some CBD,” he says, “but I didn’t feel that was enough.” He discovered the space because of his 9-year-old daughter, Devon, who has a rare genetic disorder and uses CBD to manage her symptoms. Then he teamed up with a friend, Dave Christian, to buy a 116-acre organic hemp farm in Vermont and hired a film crew to chronicle their struggles as novice farmers. The final result: Their brand, MontKush, is available as of last month, and a show called Kings of Kush debuts later this summer. Here, Sullivan and Christian talk about the benefits of doing things the hard way — and yes, they even filmed their Entrepreneur interview, which will appear on their show.

Why take this leap?

Sullivan: I had a very clear vision when I started my production company 20 years ago: I’m going to make short-form commercials that move the needle and sell products. And now, with the advent of cellphones and mass media, the barrier to entry into production is lowered. It doesn’t excite me as much. I don’t want to compete with people making cat videos and 6-year-olds opening boxes.

That’s not to say that I lost excitement for the brands I was working on. I love OxiClean. But I think deep down, I was looking for something. That entrepreneurial spirit was like, I’ve got to do something. I need to get out of my comfort zone.

Related: An Argument for Farming Hemp

That sounds like the dividing line between entrepreneurs and non-entrepreneurs. You recognize the need for change — and instead of being afraid of it, you’re excited by it.

Sullivan: Yeah. And I was seeing this Green Rush and thinking, This looks exciting. It looks dangerous. It’s got all the elements. But if I jump into the cannabis space, people are going to say, “Here he goes — OxiClean Guy is seeing an opportunity and he’s taken it.” So I thought, I’m going to have to get in the trenches.

You were seeing your advantage as a disadvantage. You could have just leveraged your celebrity, but you thought if you did that, people wouldn’t take it seriously.

Sullivan: Right. And for the first six months, I operated under the radar. I didn’t want anyone to know. Because of course, being the face of a brand like OxiClean, my fan base are moms and kids. One of my biggest fears was, like, How are the guys at OxiClean going to interpret this?

Related: To Get Into the CBD Game, You Must Know These 8 Things

How did the conversation finally go with OxiClean?

Sullivan: Once we had the 75,000 plants in the ground, I felt like the train had left the station. So I invited a couple of people from the brand up to take a look. And they’re smart enough to realize that CBD is coming. There’s a wellness component to this that you can’t ignore. I think there was a little worry, like, Are you going to be able to do both? But I’ve been able to continue my marketing-­and-production company, and also really go two feet first with MontKush. 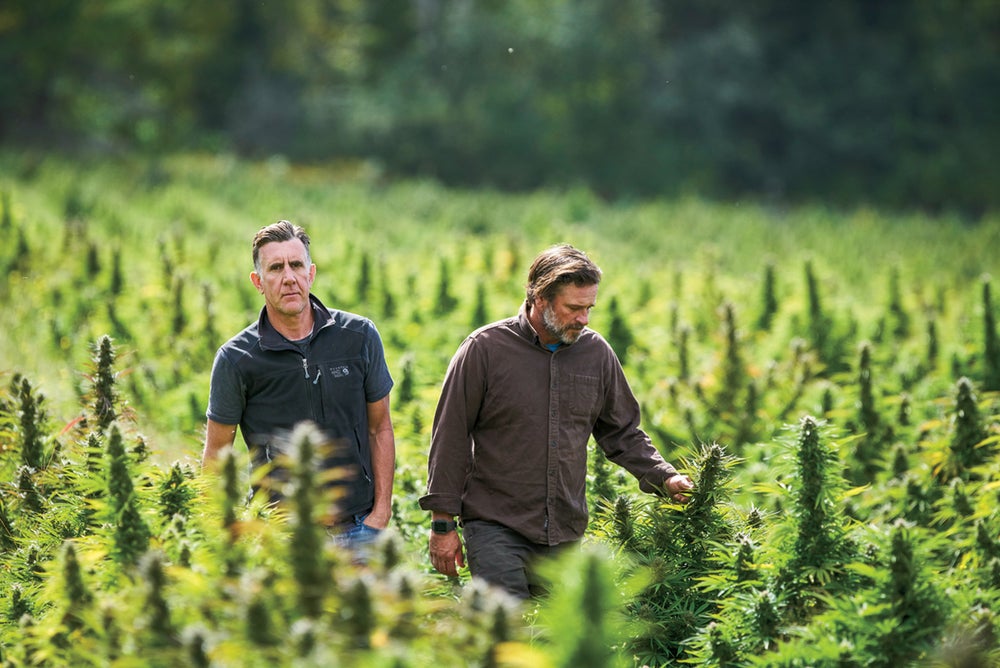 You guys have been longtime friends, but has this project challenged your partnership?

Christian: I think our friendship has only gotten stronger this year. I mean, we talk more than I talk to my wife. You really have to get along with somebody to have that much interaction. I listen to him, he listens to me, so it’s not like there’s a lot of convincing that has to happen.

Related: Why Paul Pierce Jumped On The CBD Train

Sullivan: One day, we were running into rocks. There’s a massive amount of rock on our land; we’d broken every piece of equipment we had. I called Dave up and he says, “I’m at the John Deere dealership. I’m looking at a tractor.” How much? He goes, “Ninety-five grand.” I’m like, “How much is it normally?” It’s $126,000—no one wants it; it’s too big. I said we should buy it. He says, “I already did.”

That was a time when I felt like there’s great trust between us. I think some partners will never have that; you spend two weeks talking about it, and then the opportunity’s closed.

Let’s talk marketing. How do you approach the crowded CBD space?

Christian: The marketing guru turns it over to me! Well, I think Sully made a brilliant choice in starting with the farm, and intimately understanding the plant and what it takes to raise a seedling to full harvest. We can speak from a place of authenticity that very few people can.

And we have a compelling message, having the first customer be his daughter, and other friends and family. This is the only business I’ve ever been in that people have thanked me for being in business. They’re like, “My wife struggles with nausea, and she’s been smoking marijuana to get through the day, and she hates being high all day — so man, CBD changed our lives.”

It sounds like what you’re saying is: Earnestness is a big part of your appeal.

Sullivan: I remember when I was up in Vermont the first time, and everywhere I looked, I saw a TV show. I vowed never to do a reality show again after I lost Billy Mays. [Sullivan and Mays starred in the Discovery series PitchMen until Mays’ death.] But here I was thinking, If we can capture this moment in time, we have all the makings of a phenomenal story. We’ve got fish out of water. Two of us have never farmed before. We’ve put it all on the line — superhigh stakes.

So I made some phone calls, and we were filming with a skeleton crew, and we got into harvest and Dave and I were like, “We have to turn this into a full-tilt Hollywood crew.” I think it’s going to give us a competitive advantage. Not only are we going to be able to tell the story of our farm, but we’ll tell the story of an entire journey.

Related: 12 Celebrities Who Have Jumped Into The CBD Industry

To compete in this industry, do you think others will need to start ground-up like you?

Christian: Everybody doesn’t have to do what we did. We felt it was the right formula for us, because neither one of us are potheads. We didn’t understand the plant. So we wanted to have the farm as some validation, and as an anchor, and to get an education. I would say to any entrepreneurs looking to get into a new business: At some point, you have to educate yourself as deeply as possible.

Rachael Rapinoe Talks About the Science Behind Her CBD Company

How Will CBD Impact Your Work Performance?

From Peace Corps to Peace Pipes: Steve Sakala Shows CBD Companies How to Be Eco-friendly

A Female Cannabis Veterinarian Answers the One Question Other Vets Won't