Blazing Sadlers: The Incredible True Story Of A Cannabis Family

Eight years ago, a 19-year-old Cody Sadler walked into his father’s office and asked if he wanted to get into the weed business. Cody’s dad, George Sadler, was working as a VP for his own father’s business—an electrical company in San Diego—and had zero experience or interest in the cannabis industry.

“It’s not the thing you want to hear from your son,” George says. “Cody was just finishing college and he’d never done a drug in his life—still hasn’t—and I never would have guessed that was the direction he wanted to go.”

But Cody was persistent. A business major, he had just seen a documentary about cannabis grows and “it got my head spinning and made me really interested in the whole industry,” he says.

His timing was good and so was his sales pitch. George was looking for another business opportunity and he trusted his son. A lot of people’s way into the business back then was, “Let’s grow some weed.” Cody said, “Let’s build a business.”

Related: Podcast: This Father-Son Team Built a Multimillion-Dollar Cannabis Business With The Money They Made Selling A Used Dirt Bike

Two dirt bikes and a dream

To help raise money for their new endeavor, the two sold their beloved dirt bikes for $2000 a piece on Craig’s List. Cody also got a medical card that enabled him to be a caregiver and grow a certain number of plants legally in California.

Meanwhile, George did all the paperwork to make sure they did everything legally, filing the appropriate forms for a corporation, which they called Nature’s Leaf, Incorporated.

When it came time to grow, they winged it.

“We’d never grown anything, ever,” George says. “We were dumping nutrients onto the plant. We watched YouTube videos and read online forums to get our first harvest going. Those plants just took a beating.”

To their amazement, that first harvest was beyond successful. They had six healthy plants ready to go to market. One big problem: “We couldn’t get delivery services to buy it from us, because unless you had a track record, they thought we were undercover police,” George recalls. “I remember the first call we made, the guy on the other end said, “F*%& you, pig!” 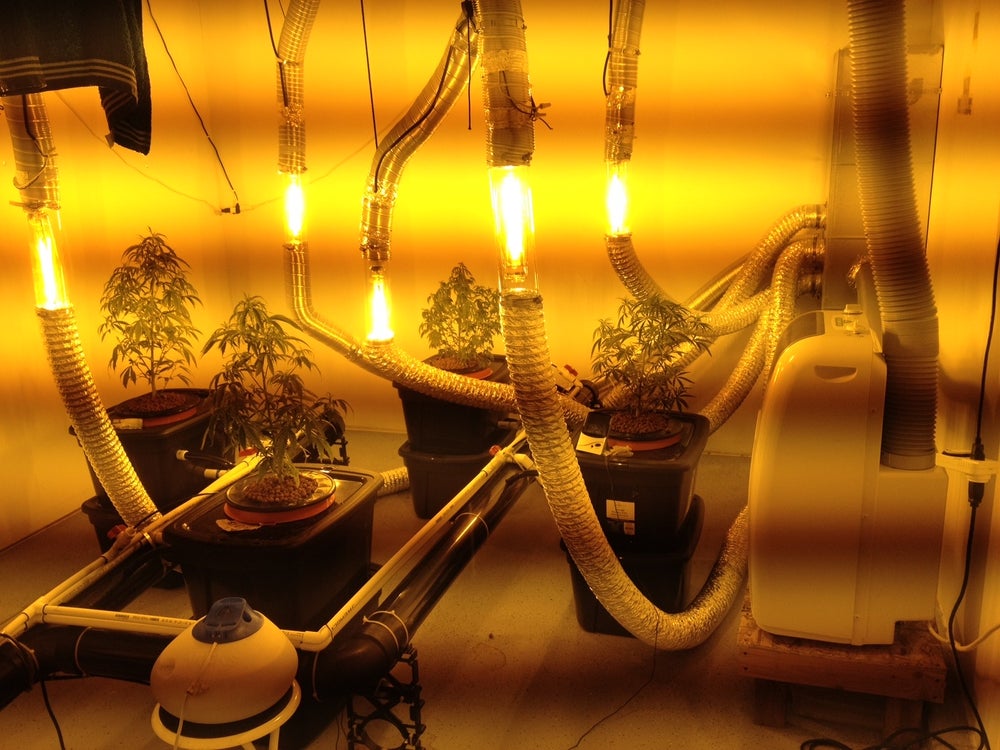 Their solution was to start their own delivery service. Cody set up a company profile on the online marketplace Weedmaps, and then they waited for the phone to ring. And waited. “I think it was like 4 or 5 days before we got our first call,” says Cody.

But then the phone started to ring and they were ready with a winning strategy: Great customer service. Through their research, they’d learned that customers were dissatisfied with other delivery companies, who were delivering product sometimes three hours late—if at all.

“As a contractor back in the day, I realized that half the battle is just showing up. The biggest thing you have is integrity. If you don’t do what you’re going to say, you lose that,” George says.

Cody and George vowed to be just as efficient and consistent as Domino’s, delivering in under an hour—guaranteed. “Six to eight months later, we were doing 80 deliveries a day,” Cody says.

But in those early days, it was just Cody and George answering the phones and making deliveries seven days a week. “We had a little office set up in our house with two phones and two cars,” George explains. “If you called up, you would think that we were in a big corporate office with 50 employees, but our system was whoever got back to the house first would fill that order, and then go out and deliver it.”

After a while, they started hiring friends to help with orders. Eventually, they moved into a real office, hired 10 to 12 delivery guys, and a receptionist to answer the phone.

Business was so good that the father-son team opened up a retail store in Oceanside. In under a year, they had four locations and their delivery service.

The two worked well together. George specializes in logistics and marketing, while Cody’s expertise is budget and buying. “I have written one check since we started this company,” George says. “And Cody has only approved one billboard.” The one that sits right outside their office window.

A trip to China

In 2016, four years after they started, the two looked at their business and realized that they didn’t need to spend money on a third-party company to provide vape pens to smoke their product. Why not manufacture the pens themselves? Even better, why not create their own brand apart from the store?

“We found a manufacturer on Alibaba and got on a plane to China,” George says.

The trip was an adventure. “We knew the name of the factory that we were going to in Shenzhen, but we got lost and eventually our cab driver just kicked us out of the cab. We were left standing in the middle of the street with no idea where we were,” recalls George. They had to use a phone in a nearby hotel to get directions.

At the manufacturer’s headquarters, they developed a vape with a better battery than the one they were currently using and created a design and packaging for their new brand, Platinum Vape. They’d decided on that name on the plane to China because it connoted a premium product.

Cody and George hired a sales team and began to sell their products at other dispensaries across the state. In 2016, their business attracted the attention of the Feds, who thought they were growing marijuana illegally out of their offices, which they weren’t.

The way the Sadlers tell it is this: One day while George was on his way to work, he spotted 10 DEA cars outside their office building. The officers had their guns drawn. George approached one standing outside the front door and said, “I’m pretty sure I’m the guy that you’re looking for.” As he recalls it, the officers dismissed him, then proceeded to kick down the doors, overturn files, and wreak general havoc inside. George was arrested and spent the night in jail.

Two weeks later, George and Cody say, officers raided their homes. They took their cars, their motorcycle, their guns (the two like to go to the shooting range), “and even the ring off my wife’s finger,” Cody says. “They said it was bought with drug money.”

A year later they got everything back except for the cash and the guns. No charges were filed, and the company still operates out of the same facility that was also raided.

“They were looking for marijuana manufacturing, and we weren’t manufacturing there. It was just a sales office,” says Cody. When asked where the pot was coming from, he has no comment except to say they were growing legally.

All in the family

Soon after, the Sadlers decided to set their sights on Michigan and became the first pre-filled cartridge company in the state. They tapped George’s other son, Nathan, 21, and daughter Maddie, 25, to run that operation.

George says he feels more comfortable keeping the business in the family. “There is a huge amount of trust there,” he says, “and seeing what they’re capable of, as a father, it makes me so proud.”

That’s not to say that his kids have received special treatment. “They had to earn their way to where they are today. My son, Nathan was fired at least twice in California before he got his act together.”

Cody points to their rather unorthodox approach to hiring as further proof of their lack of bias. “We hired people we met at Subway just because they were making a good sandwich and had good customer service. It’s very random.”

Whatever their method, it seems to be working. Last year, Platinum did $68 million in business between California and Michigan, employing 150 people. Asked what they think the secret is behind their success, the father-son team points to their independence from outside influence. From the days when they were growing in their garage to today, they’ve always done it their way, never taking a dime from an investor.

“In this day and age, when everyone has that financial backing and everyone’s getting money put into their lap to help drive their company, we put everything right back into our company, says Cody. “We get to do things the way we want to.”

George agrees. “We’re not driving Ferraris and living in these lavish homes. And trust me, that’s enticing in a lot of ways, but we’re having too much fun running this business.”

Related: Hemp vs. Marijuana: Why Can't Cops Tell Them Apart?