How This Cannabis Brand Got Its Electrifying Look

By Tyler Koslow May 13, 2020
Opinions expressed by Entrepreneur contributors are their own.

When Oliver Higgins decided to start a pre-roll brand, he imagined more than just high-quality greenery. He saw a colorful box that could double as a fashion accessory—in the pocket of a matching shirt, pulled out like a cool phone at a party. The result is Higgs with its electrifying logo in nostalgic turquoise and Bazooka pink.

Many have called the look Miami Vice. But to Higgins, 35, it’s all about California in the ‘80s and ‘90s, a simple time where skateboards, grunge, and a care-free attitude reigned on the West Coast.  As a teenager growing up in Los Angeles back then, he was drawn to the neon-soaked surfer lifestyle that still subsists under the gentrified surface of Venice and Santa Monica. He wanted his joints to take people back to that easier time.

Higgins got a medical marijuana card when he was 20, which allowed him to grow a personal stash in his mother’s garage. At the time he was trying to make his way in the entertainment industry, launching a now-defunct production company for commercials and music videos and working as an assistant to an HBO writer. His plan was to become a do-it-all director/ writer/ producer but, eventually, he realized the film world was not for him. And so, he decided to turn his garage hobby into a cannabis company--and with a nod to his last name, called it Higgs which had a way of rolling off the tongue.

One day, he was chatting up a stranger at a Double RL clothing store in the Hamptons and ended up at a converted brothel where a bunch of young adults doing seasonal work were living. One of them gave him a pack of Chinese cigarettes called Harmonization whose design was so classy and artistic, it blew his mind. Why not do something similarly arresting for Higgs, he thought? “Once I had that,” he says, “I was like, Let’s create the box.”

First, he had to work on the construction. The box needed to be aesthetically appealing, sturdy, and also slim enough to seamlessly fit in pockets without feeling too bulky. He also wanted it to travel well. “I’m a Cali kid for the most part, and my favorite time smoking a joint is on a chair lift on a mountain and skiing,” Higgins says.  “If you take a spill and your joints are in your front pocket, you’re going to crush all your joints and that’s devastating.” 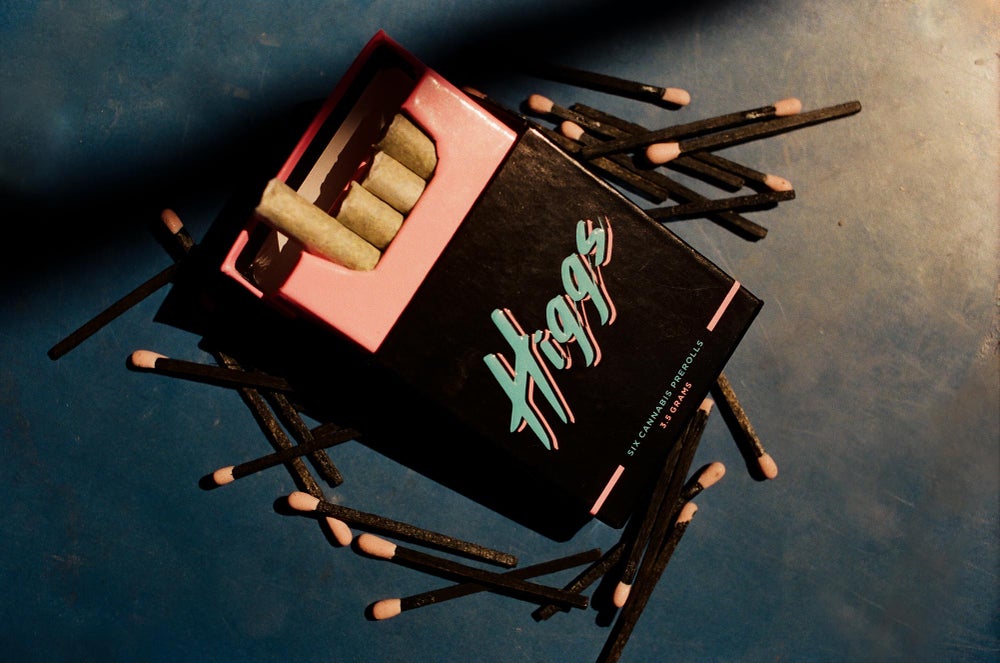 Using an Exacto knife and super glue, he created between 20 to 30 prototypes by hand, first using foam and regular cardboard, and eventually landing on a type of greyboard used for bookbinding. Not only was it less crushable, it also helped contain the weed’s dank smell. A glossy coating on top, would make it water-resistant.

Then he went about trying out different shapes and sizes.“The first one looked like an ‘80s cell phone, it wasn’t stylish or cool,” Higgins says. “Finally made one I took to a Los Angeles Rams game in my breast pocket. It rained that day, by the time I left, all the joints were secure and the pack was still stable," Higgs says. “That’s what I wanted.

Way before Higgins launched the brand in 2016, he was drawn to the color scheme he would use to draw customers’ attention. He had painted his apartment in downtown Los Angeles in that same pink and blue when he was 19. To turn the hues into a logo, he hired and collaborated with a designer named Hannah Chung. “Beyond being unisex, it brings you back to that era of the ‘90s, pre-internet, whatever you want to call it,” Higgins says. “What early Millennials felt about the ‘60s as a time of freedom and raw, it’s what kids now, like Gen X and Gen Z, think about the ‘90s. To them, it’s a period that seemed a little more free. That’s what I wanted to bring out as the vibe of the colors.”

After the extensive trial-and-error period, the resulting Higgs box sports the logo at the center and a tiny marijuana leaf at the top. Flip open the lid, and you’re greeted with six (3.5 gram) joints tightly nestled within a hot pink interior pocket. When you pull one out,  the pink-blue logo appears again on the filter.

Related: Why This Cannabis-Infused Beverage Is Being Marketed Like a Health Drink

At first, Higgins kept the box clear of anything but the logo and leaf mark; he intended that the background color would represent the cannabis type—white for Sativa, grey for Hybrid, and Black for Indica. But he soon learned that the strain had to be identified on the packaging or dispensaries wouldn’t stock the brand.  “Because I’m so design-heavy on what I wanted, I forgot it’s a consumable product and that people need information on what [that] product is.” So now the strains are indicated by a sticker.

Originally, Higgins had also wanted his pre-rolled joints to look more like cigarettes. But it became clear that buyers were turned off by the tobacco-like appearance. So now they come rolled in rice paper, which Higgins chose to enhance the flavor and produce an even burn.

He still wants to do the cigarette idea with CBD pre-rolls he’ll be launching this year, first in New York and later the rest of the country. They’ll be wrapped in hemp paper. “Those CBD pre-rolls will be for cigarette smokers,” Higgins said. “If you’re trying to get off of tobacco, this is what we’re giving you.”