By Brendan Bures June 18, 2020
This story originally appeared on The Fresh Toast

Sens. Cory Booker and Bernie Sanders held a virtual town hall meeting last week to discuss criminal justice reform, which included a lengthy dialogue about the role cannabis enforcement plays in social inequities. Booker said he and Sanders discuss "marijuana justice all the time" and how the War on Drugs influences systems of oppression.

RELATED: Black-Owned Hemp And CBD Businesses You Need To Know About

"I'm all for [marijuana] legalization," Booker said. "I came to the Senate speaking about legalization. But to say that in the same breath and not to include expunging records, reinvesting profits into communities that have been economically devastated by the drug war; you're not talking about justice if you suddenly say, "Okay, everybody started in the same field. Go ahead.'"

At campaign rallies, Sanders stated he would often ask attendees to raise their hand if they or a known acquaintance had been arrested for cannabis possession.

"I was astounded by the hands that went up," he said. "Then if you get a criminal record […] you're looking for a job and the boss says, "Have you ever been arrested?' "Well, yeah, I have been.' "Okay, well, thank you. We'll interview somebody else.'"

Booker and Sanders have established themselves as two of the loudest voices fighting for marijuana legalization at the federal level. Sanders promised immediately removing cannabis as a banned substance if he was elected President. Booker, meanwhile, introduced a bill that would legalize cannabis at the national level with support from Sanders and other 2020 presidential candidates like Sens. Elizabeth Warren and Kamala Harris. 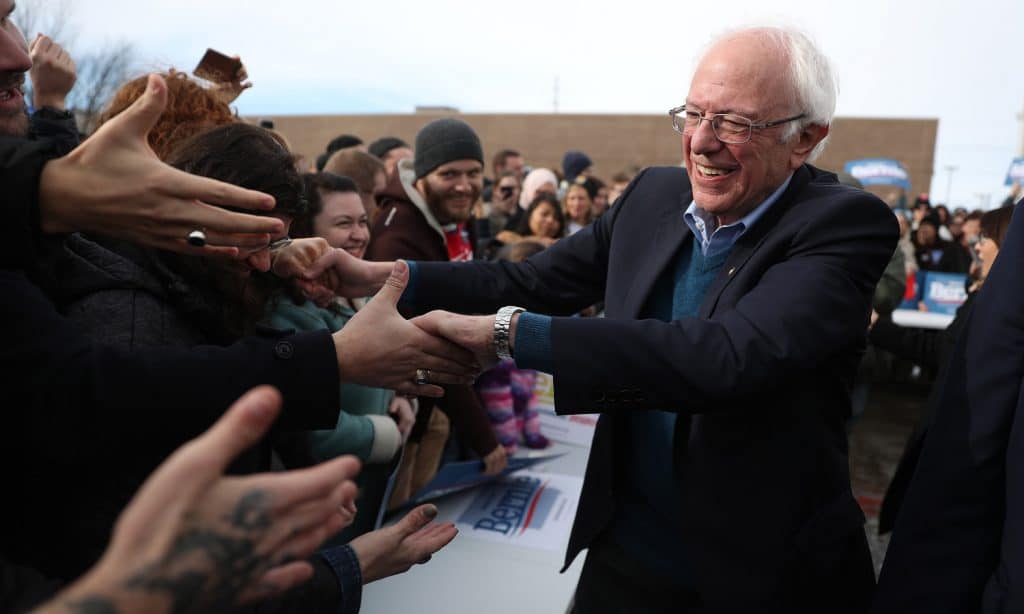 Photo by Joe Raedle/Staff/Getty Images via The Fresh Toast

Since dropping out of the presidential race in January, Booker has continued driving dialogue about marijuana reform. Amid the coronavirus pandemic, he questioned why some state lawmakers had labeled cannabis an "essential good," but the substance remained federally illegal. He also underlined how marijuana enforcement represented the racist inequities spurring protests following the death of George Floyd while in the custody of Minneapolis police.

He echoed those sentiments in conversation with Sanders, when a viewer asked: "What would legalizing marijuana, expunging the records of those arrested for marijuana, mean for people of color?"

"In 2017, the last year we have data for, there were more marijuana possession arrests than all violent crime arrests in America combined," Booker said. "And again, they're arresting people of color. They're not arresting folks of greater privilege."

As Booker referenced, that data also showed black Americans were more than four times as likely to be arrested for marijuana possession than white Americans. The groups, however, consumer marijuana at similar rates.

"Now you get a nonviolent drug charge for doing something that two of the three last presidents admitted to doing," the senator said. "Now you have 40,000 collateral consequences that strip you from your economic power. You can't get Pell grants, can't get public housing, can't get jobs, can't get loans from the bank."