Total U.S. sales could rise as high as $37 billion by 2023, Marijuana Business Daily data finds. Meanwhile, the coronavirus pandemic has thrown a huge curveball at projections.

Retail sales of medical and recreational cannabis in the United States are on pace to eclipse $15 billion by the end of 2020, an increase of approximately 40% over 2019 sales figures, according to exclusive projections from the 2020 edition of the Marijuana Business Factbook.

Total U.S. sales could rise as high as $37 billion by 2023, according to exclusive projections from the latest Factbook, which was released Monday at MJBizConNEXT Direct.

The coronavirus pandemic, however, has thrown a huge curveball at projections.

RELATED: 5 Reasons Why Vertical Integration Is The Best Path To Success

To date, spending on adult-use cannabis in markets that aren’t tourist-driven has increased, as have sales in nearly every domestic MMJ market.

However, this increased level of spending comes as unemployed workers continue to receive an additional $600 per week in unemployment benefits. This additional assistance, however, is set to expire at the end of July.

It remains an open question how cannabis sales will fare if no – or limited – additional financial stimulus is provided to the tens of millions of unemployed U.S. residents.

Despite short-term uncertainty, the long-term potential of the cannabis industry remains intact.

Sharp sales increases in recently launched medical marijuana programs – as well as continued gains in adult-use markets – are expected to fuel much of the industry’s growth over the coming years. 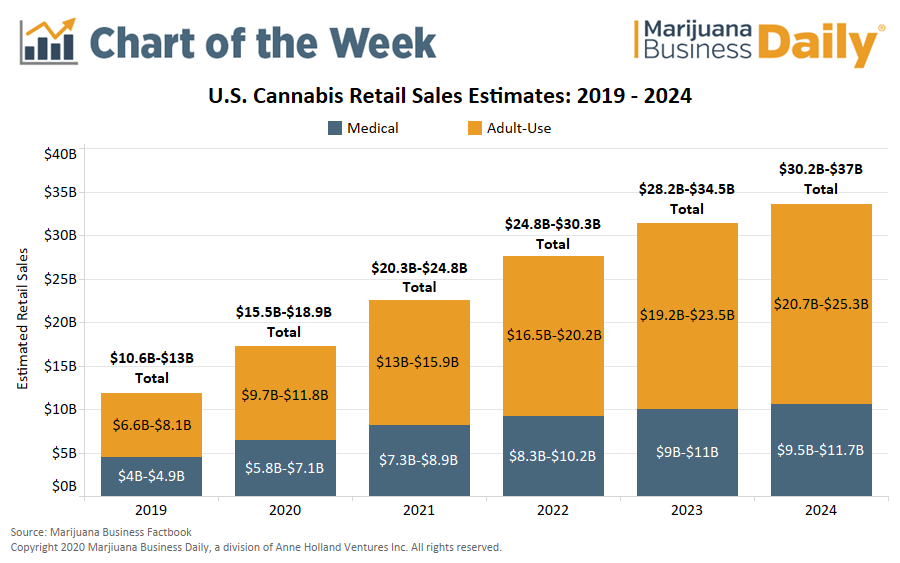 New MMJ markets including Florida, Maryland, Oklahoma and Pennsylvania are booming, more than offsetting lost medical sales in markets that have legalized adult-use sales, such as Illinois, Massachusetts and Michigan.

Oklahoma is especially notable, as more than 8% of the state’s population has registered as MMJ patients – a figure that far exceeds even the most optimistic initial projections.

MMJ sales in Florida and Oklahoma are expected to surpass $1 billion each by 2021, placing them among the most valuable and rapidly growing cannabis markets in the United States – medical or otherwise.

On the recreational side, sales growth rates in mature markets such as Colorado and Washington state rose or remained flat after several consecutive years of decline.

While there’s no definitive answer, data suggests consumers from Generation Z – those born in 1997 and later – and consumers who continue to transition out of the illicit market and into the licensed, legal channel contributed to the growth.

RELATED: Drone Technology Is Revolutionizing These Industries. Is Cannabis Commerce Next?

New adult-use markets in Michigan and Illinois – the first recreational marijuana markets in the Midwest – came online in late 2019 and early 2020, respectively. Though the number of retail stores in both states is low, access is slowly improving, and each market is expected to eclipse $2 billion in annual sales by 2024.

Even though the state has so far underperformed, sales in 2019 still reached nearly $3 billion – generating more revenue than Colorado and Washington state’s adult-use markets combined.

California’s recreational industry is expected to improve in the coming years as businesses adapt to the states’ unique regulatory environment and more municipalities allow these businesses to operate in their jurisdictions.

Eli McVey can be reached at Eli.McVey@mjbizdaily.com

Marijuana Sales in the Midwest Are Lighting Up

5 Things to Consider Before Investing in the Cannabis Market