American marijuana businesses could pump up to $130 billion on an annual basis into the U.S. economy by 2024, a staggering figure that highlights the true reach of the nation’s cannabis industry.

Estimates published in the newly released Marijuana Business Factbook show the total economic impact of legal cannabis sales increasing from $38 billion-$46 billion in 2019 to $106 billion-$130 billion by 2024 – a 181% increase.

By comparison, the $130 billion figure is similar to the 2019 gross domestic product of Nebraska, which stands at $129 billion, according to the U.S. Bureau of Economic Analysis.

Though the coronavirus pandemic has added a significant amount of uncertainty to the equation, the fundamentals of the cannabis industry remain strong – meaning any short-term disruptions aren’t likely to derail the long-term economic impact of marijuana sales. 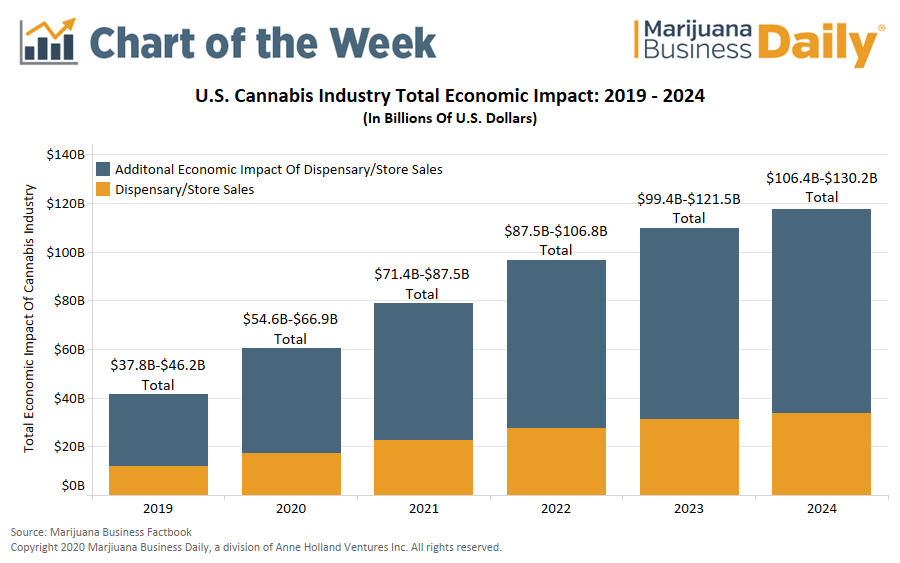 The economic impact of the marijuana industry is not the same measurement as total revenues along the cannabis supply chain, which can be used to estimate the total size of an industry.

Rather, the economic multiplier paints a picture of the impact the industry as a whole has on the broader economy, showing how revenue generated by cannabis businesses permeates through communities, cities, states and the nation.

The Marijuana Business Factbook estimates use an economic multiplier of 3.5 to quantify the industry’s overall contribution to the economy.

In other words, for every $1 consumers/patients spend at dispensaries and recreational marijuana stores, an additional $2.50 of economic value will be injected into the economy – much of it at the local level.

RELATED: US Retail Cannabis Sales On Pace To Rise 40 Percent, Eclipsing $15 Billion In 2020

Following are examples of how marijuana businesses affect the economy:

This information is particularly valuable when trying to show the benefits of legalization, as it can help lawmakers, regulators and public officials understand how important the cannabis industry already is to the larger U.S. economy – and how much more important it will become.

Eli McVey can be reached at elim@mjbizdaily.com