Cannabis Legalization Is Not A Priority for Congress, Biden, or Trump. Here's Why.

The industry doesn't have the political clout or voter passion behind them to push weed over the finish line, but you can help.

Despite evidence that two-thirds of Americans support legalizing cannabis, federal moves towards legalization have been small and halting. Even simple measures, such as regulating banking in states where cannabis is legal, have a tough time getting support in Washington. Think about that.  How many issues in today’s polarized society have a two-thirds consensus? You’d think politicians could unite to present a rare bipartisan win and get on with it. You’d also think that presidential candidates scrambling for votes in a close election would want to tap into that 66 percent.

But unfortunately, you'd think wrong. What is going on?

It’s true that some of the most influential people in politics oppose cannabis legalization. Mike Crapo, the chair of the Senate Banking Committee, comes to mind. Joe Biden has some personal opposition to legalization, as he was complicit in the War On Drugs back in the day. Recently, Biden successfully avoided supporting full legalization of marijuana in his unity message with former rival Bernie Sanders and in the Democratic Party platform. President Trump has been hot and cold on the subject, honoring an agreement with Colorado Senator Cory Gardner to hold back federal raids on state-legal cannabis operations but also appointing two consecutive anti-legalization Attorneys General. The second one, Bill Barr, has abused the antitrust laws to frustrate the industry.

But despite this opposition, individual actors, no matter how powerful, could not stop a large bi-partisan move towards legalization. The reason legalization is not moving forward is that its support is wide but not deep. A solid majority of Americans want legal cannabis, but it’s not a particularly important issue.

That has always been true, but it is even more true in 2020 with the pandemic.

In a recent Gallup Poll, American voters were asked, “What do you think is the most important problem facing the country today?”

No other issue gets more than 4 percent, and the issues which might be most helped by cannabis legalization, (crime, healthcare, drugs, and elder care), sum up to just over 6 percent.

Once each year, Gallup also asks Americans to weigh how important various issues are to them. Last October was the last time Gallup reported results. That was before COVID hit the world, but the results are instructive.

Gallup did not ask specifically about cannabis, but we can make some logical assumptions about cannabis based on the results for some of the other issues. 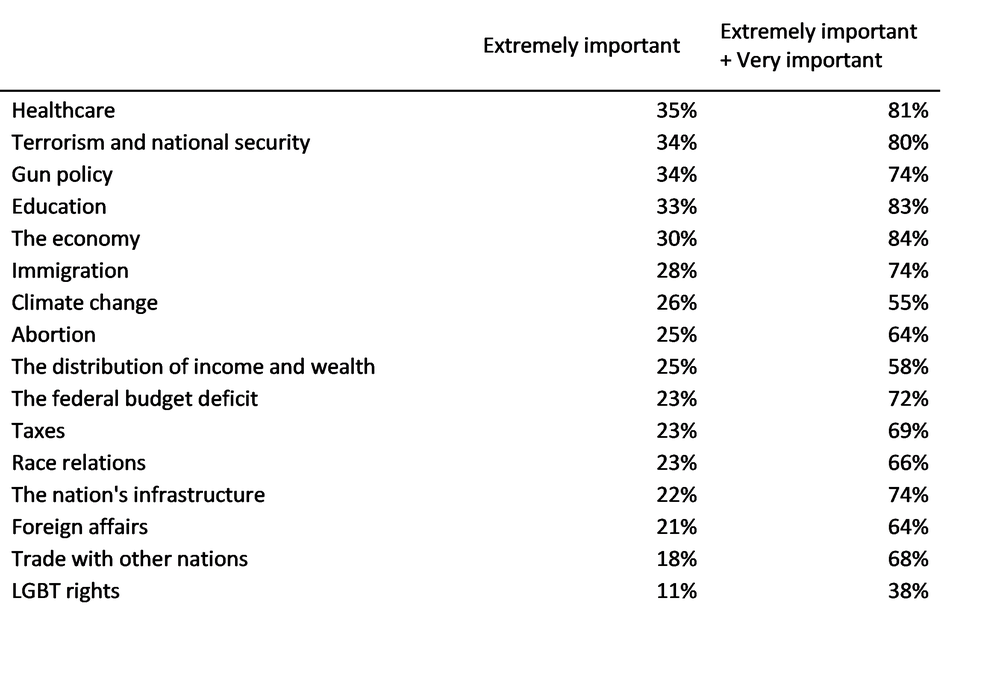 Take trade. In October of last year, a trade deal with China was the top story in every news outlet. It had been a huge issue all summer, with President Trump frequently making statements about it and thousands of well-paid pundits talking about how the President’s new approach to trade and his negotiations towards a trade agreement with China would help or hurt US jobs and consumers.

In that context, think about how essential cannabis legalization is for most people. Only 45 percent of Americans have ever tried cannabis and only 12 percent currently use it.

Those low numbers are actually good news for the economics of the cannabis industry. They represent a massive opportunity for growth. But it’s a hurdle  for industry groups seeking federal legalization. Politicians tend to care more about what their donors care about than what their constituents care about. There is just no real evidence that most voters care about cannabis legalization, and lobbying money isn't being directed to federal legislators. When someone from the Cannabis Trade Federation goes to lobby the White House or the National Cannabis Industry Association donates to Mitch McConnell, it is a drop in the bucket compared to what, say, Big Pharma or the automotive industry gives. All parties know that few voters outside the cannabis industry will switch their vote based on a candidate’s stance on cannabis.

Joe Biden’s position on cannabis is a perfect example. Democrats favor cannabis legalization even more (76 percent) than the overall population, and self-identified liberals support legalization even more than that (82 percent). And yet Biden has not committed to legalization. He knows that if Donald Trump endorsed full legalization, insurance coverage for medical cannabis, banking reform, and every single thing a pro-cannabis voter might wish for, few if any liberals are going to change their vote and support the President. Similarly, few if any voters will choose between Mitch McConnell and his opponent Amy McGrath based on either candidate’s view of cannabis.

A reason for optimism

What is to be done about all of this? The good news is that the cannabis industry is acting correctly. They're chipping away a little at a time, focusing on aspects of the industry that appeal to more important issues to individual legislators (legalization will reduce mass incarceration, particularly among Black Americans, banking reform will reduce fraud, tax revenues are available to your beleaguered state, etc.).

This basic blocking and tackling creates a gradual momentum toward legalization. Using those poll numbers in favor of legalization, the industry groups may not convert an anti-cannabis legislator or convert cannabis to a front-of-mind issue in anyone’s mind, but they can encourage legislators on the fence that there will not be a punishment from voters for pro-cannabis votes. That was not true just a few years ago.

You may have a role to play, too. If you donate to politicians, tell them about your cannabis views. Be honest. There’s nothing wrong with communicating that you would have supported the politician anyway but her stance on cannabis is what moved you to make a donation. You might also consider a donation to the National Cannabis Industry Association so it can continue building momentum or the Last Prisoner Project.

If you are investing thousands or millions of dollars in the cannabis industry, but you haven’t donated to one of the organizations that make it easier for cannabis companies to thrive, you are doing yourself and the industry a disservice. Federal action of any sort is unlikely this year and full legalization is unlikely next year. But legalization will come. It will come as a result of the good work being done by the advocacy groups and by voters like you. But there is still work to be done on the state level, and that is a process that generates enough “wins” for cannabis consumers, growers, and investors to keep spirits up while we wait.

Get Lost In the Country's First Hemp Maze