Cannabis Is Poised to Rescue the Economy From Collapse

But first, we need to do these 5 things.

By Pam Chmiel August 6, 2020
Opinions expressed by Entrepreneur contributors are their own.

Billions of dollars are sitting at the doorstep of Capitol Hill, begging to participate in the economy. But with some wise moves by the Federal government and regulatory agencies, cannabis-generated revenue could be a significant answer to our financial crisis stemming from the pandemic.

For proof, look at the numbers. In 2019, the cannabis industry generated $629.3 million in tax revenue. Thirty-three thousand jobs were added in the United States, bringing the total to 250,000 jobs. The federal legalization of marijuana would create more jobs, provide potential breakthrough medical advancements, and possibly help reverse social injustice.

The cannabis industry is the fastest-growing sector of the U.S. economy, with lots of potential for even more growth. Still, if the government doesn't take action on the following five items, we will miss out on the opportunities.

It starts at the top. Legalization concerning the industry at the federal level must reflect the reality that 34 states have now passed medical marijuana legalization legislation for adult-use marijuana. Such recognition by the federal government is necessary to avoid misinterpretation of laws regarding interstate commerce activities and to clarify any exposure to legal risk for businesses.

The essence of the problem lies in the Schedule 1 classification of marijuana in the federal Controlled Substances Act ("CSA") as a drug "with no currently accepted medical use and a high potential for abuse. Other Schedule 1 drugs include heroin, lysergic acid diethylamide (LSD), methylenedioxymethamphetamine (ecstasy), methaqualone, and peyote.

The fact that marijuana is categorized as a Schedule 1 drug under the CSA prevents banks and other financial institutions (many of whom are federally chartered), from offering services to a cannabis-related legitimate business. Banks fear being deemed as aiding and abetting illegal activity under federal law, which is a felony.

Without banks, these state-compliant businesses can't accept credit cards, get loans, setup deposit accounts, write checks, run payroll, or pay taxes. Who would think this is a safe and efficient way to run a business?

Suppose the 2019 Secure and Fair Enforcement (SAFE) Banking Act passes in the Senate (where it currently sits). In that case, it will prohibit bank regulators (FDIC, Federal Reserve Board) from penalizing banks for doing business with a "Cannabis-Related Legitimate Business."

The cannabis industry is unbanked, and the government is at fault. This situation currently only enables money-laundering and the sales of illegal drugs.

3. The FDA has to stop dragging its feet

There are still no official guidelines for cannabis-related products from the FDA, even though it has been two years since the 2018 Farm Bill passed, removing hemp as a Schedule 1 drug from the CSA.

The FDA admits in a recent report that the lack of regulation is potentially harmful and dangerous for humans and pets, but CBD products remain on the marketplace, without control. The FDA randomly tests CBD consumer products and found alarming discrepancies between the label descriptions and the actual product content of THC levels (0.03% legally allowed), CBD content, and contaminants (metals & pesticides).

With that said, the FDA also admits the reports are minimal and do not represent an extensive analysis. Why not? This is unacceptable.

Here is a sample of the findings of the report: 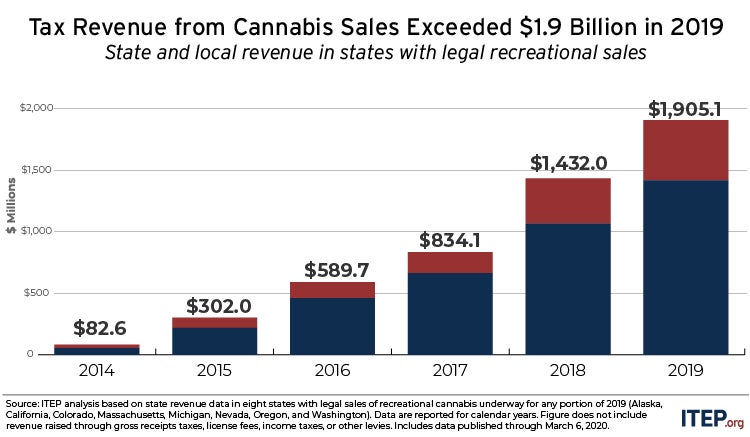 You can access the full report at Marijuana Moment.

The lack of a sensible tax structure (coupled with a bankless system) provides no incentive for cannabis-related business owners to report actual revenue or comply with tax laws. Some state tax laws are so unreasonable that they prohibit businesses from operating cost-effectively.

Take California, for example. The most "friendly" cannabis state is actually the most "unfriendly" when it comes to taxation. A cannabis business must comply with a 45 percent tax rate when you combine state, local, and excise taxes. If you are a cultivator, you have an additional state entry fee, a cultivation tax fee. The California Department of Tax and Fee Administration (CDTFA) decides your product mark-up rate. Thus, the CDTFA determines the percentage a cultivator must mark-up the cost to a distributor. On January 1, 2020, the rate went from 60 percent to 80 percent, which means higher prices for the consumer.

And to top it all off, since cannabis is considered a controlled substance, businesses are not allowed to deduct business expenses under the IRS Code 280E at the federal level, even though cannabis is legal at the state level. This tax law is also a blow to a business's bottom line.

According to James K. Landau, an attorney and member of the New York State Bar Association Cannabis Law Committee "such high tax rates coupled with the lack of available deductions and prohibitive license fees make it virtually impossible for a cannabis business to operate successfully in the legal marketplace," he says.  "Intelligent regulation is needed at both the federal and state level if we are going to be successful in bringing the legacy cannabis market above-ground."

Many people claim that cannabis (including marijuana and hemp) contains medicinal benefits that could cure cancer, PSTD, anxiety, arthritis, and Alzheimer's, to name a few. But, marijuana's legal status stands in the way of any relevant research.

The University of Mississippi was the only government-approved cannabis cultivator. Researchers could request plant material until March 2020 when the DEA announced a new rule to allow for additional registered growers.

Because the DEA determines the quantity, diversity, and potency of the crop the University of Mississippi is allowed to grow, it limits a researcher's ability to test different variations of plant compounds or get access to the amount of plant material needed. Besides, many medical researchers argue that the level of the crops grown at MU is substandard compared to what's in the market today - legal or illegal.

More than one government-approved lab should be responsible for researching and verifying data on the multiple strains and chemical compositions of the Cannabis plants. There is so much to learn about the biological differences between people and how they metabolize the mind-altering chemical (THC) found in marijuana.

The hope is that there will be expanded medical research given the recent rule passed by the DEA to allow for more plant cultivation. Then all we have to worry about is the FDA setting guidelines for drug manufacturing approval.

The good news is that government officials have had more meetings this year around the proposed laws surrounding cannabis than in previous years. The time has come for the government to free up the cannabis industry to fuel our economy with the trillions of dollars it is generating.

Remember, the legalized market is still competing with the legacy market. If the government doesn't intelligently regulate the industry through the Federal Reserve Board, FDA, DEA, and IRS, the legal marketplace will get priced out. In the end, the consumer always goes for the deal with the best value.

Special thanks to James Landau for his inspiration and guidance on writing this article: James K. Landau, an attorney, member of the New York State Bar Association Cannabis Law Committee and co-chair of the joint regulatory committee of the New York City and Hudson Valley Cannabis Industry Associations

Pam Chmiel is an entrepreneur with experience launching three start-ups that include a toy product, a non-profit educational program for teens, and espresso bars. Chmiel is a writer covering many interests and industries.

More About Legalize It

A Country Divided? Not When It Comes to Marijuana Legalization

Texas May Be the Next State to Legalize Marijuana