The 25-year-old phenom has a big fight this weekend, but he's already knocking fans out with his clothing line and cannabis products.

Sean O'Malley isn't the first combat-sport artist to claim the nickname "Sugar," but — all due respect to both legendary Rays, Leonard and Robinson — he may be the youngest to achieve such versatility in his business affairs. At the tender age of 25, the Montana native has pulverized and outmaneuvered a dozen UFC opponents on his way to a 12-0 record in the MMA league's bantamweight division. And this Saturday, at UFC 252 in Las Vegas, he'll take on 15-6-1 adversary Marlon Vera in the hopes of continued ascending toward Conor McGregor-like heights of winningness and reward.

But in case all that doesn't pan out, O'Malley has contingency plans. Those include an independent line of basketball jerseys and apparel he helped design that sold out at lightning speed upon release earlier this week, and plans for a "Suga Strain" line of cannabis products that builds on the Sugar Show OG strain he developed alongside Californa-based luxury cannabis brand Atrium. And did we mention he has a hugely popular Twitch channel that he hops onto just about daily?

For an avowed stoner, the dude is busy. Nevertheless, we caught up with him by phone three days before his clash with Vera to talk about the dizzying business of being Sugar Sean O'Malley, keeping your loved ones close, getting through the next fight and laying out Suga Strain's next moves.

Related: Jermaine Dupri Talks New Role With The Beet and a Lifetime of Entrepreneurial Inspirations

At this moment, how official is the official launch of your clothing line?

Pretty official. [Laughs] It's selling well. We tested the water with limited jerseys, and they sold out in 39 seconds. With this next launch — with two hoodies, three shirts and a hat — I plan on having the Suga merch be real big. I don't want to keep getting sponsored by companies like Reebok. I want to surpass those companies. So it's the perfect time right now to drop the line. It's fight week. So it's going really well.

You seem to have a good business instinct? Where did that acumen come from?

I don't know. Just knowing that UFC is not gonna pay you ... Everyone knows, you got to the NBA, the NFL, you're making millions. You get in the UFC, you're not making that. You definitely can. I'm going to be making millions. But I want to build an entire brand. I don't know where that came from. It just kind of happened. With the fanbase that I have, it makes it possible.

Juggling all this has to be stressful. How are you compartmentalizing it?

Meditation. I gotta clear my mind throughout the day, start my morning off with a good mindset and go to bed at night with a clear head and not stressed about this stuff. Because it is easy to stress about it. I have to make sure I have certain posts on fight week for sponsors, I have to make sure these jerseys get out, I gotta make sure my merch is doing what it needs to be doing. So there is a lot that goes into it, but I gotta make sure that I can quiet my mind and not stress in these moments, and that's what I've been doing.

I suppose that's where cannabis comes in too. And where are you in launching the Suga Strain line?

Right now, it's something I'm putting off for this fight week. I don't know yet. I think I'm gonna deal with that more after the fight. I just don't want to overload my plate, so that will be figured out after.

You must have people you can delegate to. How do you know who you can trust to bring in the fold?

Yeah, my dad's been helping me a ton with emails and phone calls and figuring out who to work with and who not to, because there's thousands of people out there who want to be a part of the Suga Show. And also, the CEO of one of my long-time sponsors, Sanabul — Imran [Jawaid], he's been helping a ton. And just asking people who know more than I do, figuring out who knows the industry and what their background is and going their route. There are definitely people that suck and people who are good. You just gotta kind of weed through 'em. 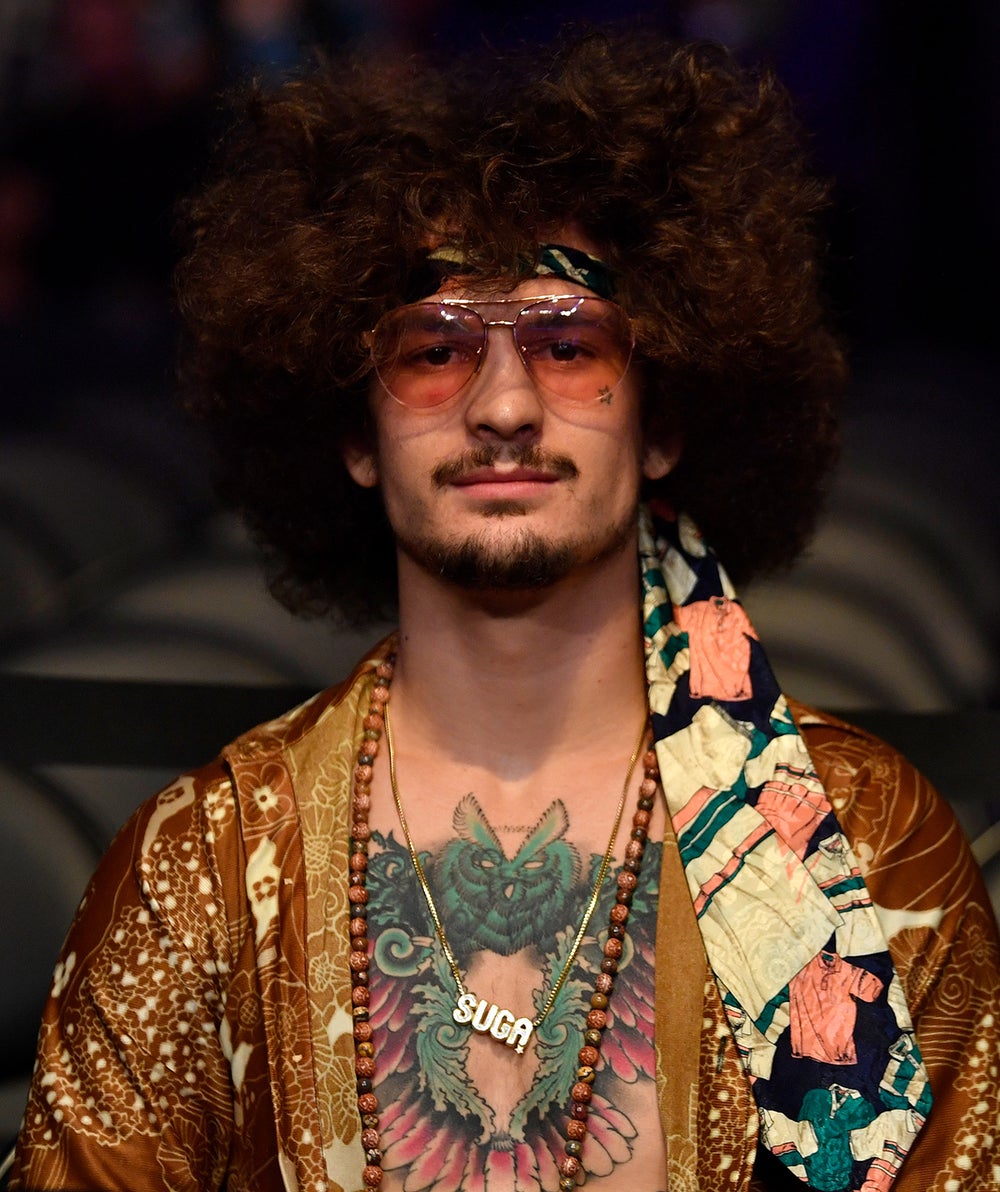 And besides Conor McGregor, are there others who set a template for how you want to brand and diversify yourself?

I personally just don't pay attention much to what's going on with other people. Conor I always paid attention to because he's in UFC and was blowing up and his fights were exciting. Other than that, I don't follow any other athletes. I have so much stuff going on for me that I have to figure out what I need to do right now.

Plus, the science is clear that someone can only take punches for so long without collateral damage, so do you view all these side ventures as a contingency for life after fighting?

I don't get hit a lot. I know the possibility that I get knocked out and I get brain damage. I don't spar outside of camp, and the last time I got hit really was in my UFC debut. But it is a thought, so having all these little business is definitely a part of that. But it's also because I enjoy it.

You didn't take a conventional route to your current destination. What do you think others looking to blaze their own path can take away from your story?

I've known I wasn't going to college since I was in elementary school. Once I found my passion, which was fighting, it was like, "I'm gonna spend my time learning about fighting and things that will improve my fighting: nutrition, recovery, all that stuff. If you haven't found your passion, it's hard. Once you've found your passion, it's easy. I wasn't making any money the first five, six, seven years, but I was doing what I loved every day and investing my time in myself, and now I'm making money and it's working out. But even if it didn't work out, I would still be doing it, because I love it.