This Elephant Takes CBD To Treat Her Depression

The Warsaw Zoo has been giving a grieving elephant named Fredzia cannabidiol extract.
Next Article Add to Queue

Fredzia, a young female elephant at the Warsaw Zoo, has been grieving the death of her friend since Erna, who died last March. Erna was the female elder of a herd of at the zoo. By all accounts, the two elephants were close.

"You could see that she was also grieving actually, she was also depressed," Dr. Agnieszka Czujkowska, head of the zoo's Animal Rehabilitation Department, told BBC News. "When Erna passed away, everything changed. I don't think Fredzia was ready for such a big change."

While Fredzia's behavior was distressing, it also gave the zoo an opportunity to try out an experimental new treatment: CBD. 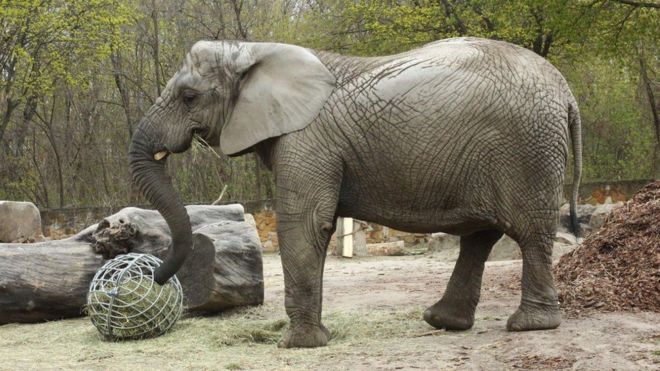 The CBD oil will be administered directly to the elephant's mouths or mixed in with her food. Her health will be regularly checked through blood tests.

CBD oil has been shown to stimulate the production of serotonin and dopamine, which helps reduce depression.

Related: Early Research Is Hopeful About CBD and Depression

Scientists will also be collecting feces and saliva samples to monitor Fredzia's cortisol levels. Cortisol is a hormone produced in stressful situations.

While it's hard to imagine the size of the dose required for an 8,000-pound elephant, Dr. Czujkowska says the amount is small enough to have minimal if any side effects.

"It's not very potent. The only side effect will be some behavioral changes," she said. "We will have to manage these to achieve the results we want."

So let's address the elephant in the room: Has the CBD trial of Fredzia been successful? Zoo doctors say that we'll have to wait and see. CBD will be administered to all the elephants at the zoo. The results of the study are not expected for at least two years, according to Dr Czujkowska.

But if the elephants respond favorably, the zoo will start giving CBD oil to other stressed-out animals, including rhinos and bears.

Kathleen, Founder and CEO of Grayce & Co, a media and marketing consultancy, can help you develop a brand strategy, build marketing campaigns and learn how to balance work and life.
Book Your Session

What Are CBD Crystals?