Earlier than normal cold conditions could result in lots of loss flower for farmers.

By Bart Schaneman September 14, 2020
This story originally appeared on MJBizDaily

An early cold snap that swept through Colorado on Tuesday and into Wednesday drove temperatures below freezing and dumped inches of snow, potentially destroying millions of dollars worth of outdoor cannabis and hemp plants.

The crop damage will likely disrupt the supply of material for THC and CBD extracts across the state for months to come, similar to what happened when the Pueblo area in southern Colorado experienced an early freeze in October 2019 that caused significant financial losses to large outdoor marijuana farms.

That freeze also curbed the usual flood of outdoor-grown cannabis into the state’s market.

As opposed to last year, a Colorado temperature swing of roughly 70 degrees Fahrenheit came far too early in the season for growers to preemptively harvest their plants.

And growers without adequate weather protection had to watch as their crops froze and were covered with wet, heavy snow that broke plant stems and branches.

“This is devastating,” he added.

RELATED: Colorado Rolling Toward Another Record Year In Cannabis Sales

At the PotCo outdoor marijuana farm outside Pueblo, co-owner James Lowe felt confident he was ready for the coming low temperatures, but the forecast didn’t prepare him for up to 9 inches of wet snow.

In partnership with neighboring Next 1 Labs, the PotCo farm has roughly 7,000 plants, many 7-8 feet tall, that were trellised together, and the heavy moisture collapsed a lot of the canopy.

“We were on pace for the largest harvest we’ve ever had,” Lowe said. “The weight of it was what ended up being the problem.”

Lowe said the losses could reach $4 million-$5 million, though they could be significantly higher or lower, depending on several factors.

If the plants can pull through as temperatures increase, then the employees will be able to harvest the flower as planned.

If not, the entire crop will go toward extraction and fetch a significantly lower price. But it wouldn’t be a total loss.

“The THC is still out in the field, and it’s not going anywhere,” Lowe said.

Lowe expects this early storm will lead to a replay of the 2019 market dynamics, with demand outstripping supply.

The silver lining of this storm for Lowe was his crop was the biggest and healthiest his team has produced, so he expects to “still be in a profitable situation.”

In the San Luis Valley, near the small town of Moffat in southern Colorado, hemp grower Harvey Craig said temperatures were in the high 20s Wednesday morning.

“Anything that was left outside froze pretty solid,” he added.

Greenhouses cover about 70% of Craig’s hemp farm, and he used shade cloth, canvas and plastic to protect the rest of the outdoor plants.

Plastic can stop the growth of flower, according to Craig, “but it’s better than nothing.”

Wet and heavy snow snapped uncovered plants at the stalk and broke branches.

Intact plants might still lose cannabinoids if the snow and frost knocked off trichomes.

“This is devastating to a lot of farmers,” Craig said, echoing Vaught. “I hope this doesn’t put people over the edge. The hemp industry is a tough struggle.”

Craig said he skipped crop insurance this year. He’s had problems with insurance companies not wanting to work with hemp.

As for the impact to the CBD supply in the region, while the storm’s impact on large-scale industrial outdoor farms could cause a dip in supply, Craig said thousands of pounds of dried flower from last year still haven’t been extracted.

At Denver-based marijuana company Lightshade, which has four indoor grows and a greenhouse with 20,000 square feet of growing space, workers were scrambling to tweak the greenhouse environmental controls to adjust for the cold.

Nick Drury, director of cultivation, said Lightshade didn’t lose any plants, but the workers were up late Tuesday and all hours Wednesday morning making sure the greenhouse didn’t get too cold.

They held the temperature to around 69-70 degrees Fahrenheit but would prefer it in the lower 80s.

As for the impact of the early freeze on the larger marijuana market in Colorado, Drury said he usually sees a flood of outdoor cannabis, both legal and illegal, after the fall harvest.

In anticipation of such lower-end, cheaper material driving down prices, Lightshade grows lower-yielding but more premium strains to cater to the higher-end market around this time.

If the supply of lower-grade, higher-yielding material isn’t there, then his company could have a business opportunity – if it had a time machine and a crystal ball.

“It’s not something you can kind of just take back,” Drury said, meaning the company would have grown more higher-yielding but slightly lower-quality strains if it could have predicted the weather.

He added that the decreased supply from the outdoor grows will mean indoor growers will see less lower-grade competition and the price for extract materials could increase.

Tim Gordon, chief science officer at Functional Remedies, based in Boulder with a hemp cultivation operation east of Pueblo, said he hasn’t experienced anything like this storm.

“The sudden onslaught was unprecedented,” he said. 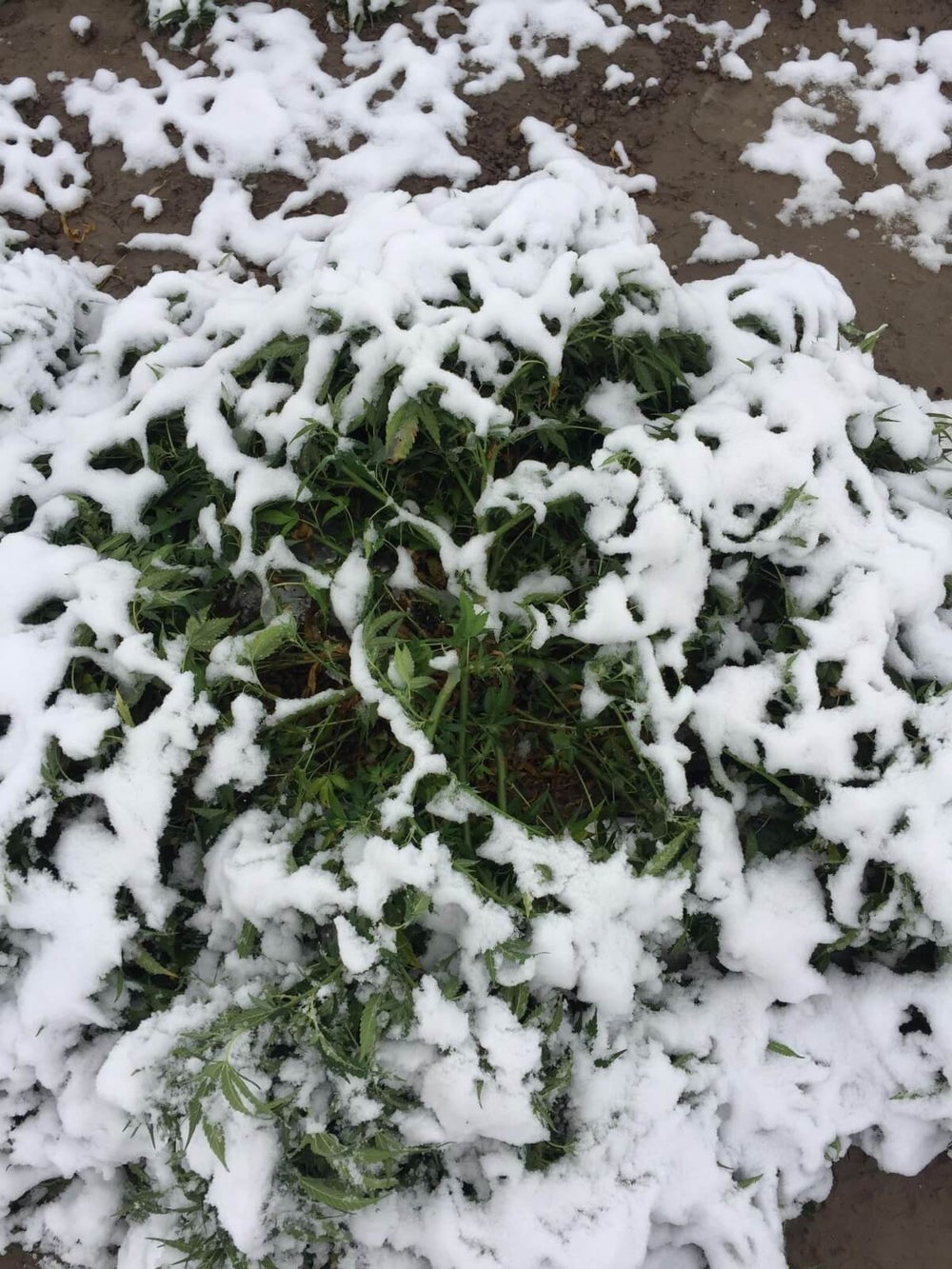 A close-up look at a snow-covered plant at the Functional Remedies hemp farm outside Pueblo, Colorado.
Image Credit: Courtesy of Tom Gordon via Marijuana Business Daily

Temperatures at the Pueblo farm were around 32 degrees Fahrenheit early Wednesday morning but didn’t get lower.

His seven-person farm crew, along with five seasonal workers, walked the 60-acre hemp farm shaking the snow off branches and trying to lift up plants that were pushed to the ground.

His farm was in the harvest-preparation stage, with the plants fully flowering and nearing maturity.

The freeze could cause damage to the cell structures of the plants as well as kill off fan leaves. The moisture could lead to bud rot if the plant doesn’t dry out.

Fortunately for Functional Remedies, the company has crop insurance with an act-of-god clause.

Vaught said the growers with healthy, vigorous plants are better positioned to withstand these types of storms.

He recommends paying attention to fertigation and irrigation systems, keeping backup power generators tuned up, and making sure gas connections are set up to keep the heating system prepared.

“Anything you can do to minimize the stress,” Vaught said.

But he recognizes that outdoor growers don’t have the same options.

For them, he recommends certain strains, such as like Early Pearly, that can survive frost and slightly lower temperatures than other cultivars. Those are particularly useful in the spring if a late freeze hits.

Broadly speaking, Vaught pointed out that the weather extremes will continue to be a challenge for anyone growing plants outdoors.

“This is direct evidence of the variability of climate change,” Vaught said. “It makes it very hard to navigate in an agricultural setting.”