Cannabis Consumers' Buying Patterns Sure Are Changing During The Pandemic

Stats show the behaviors of consumers as they deal with the mental and physical impacts of COVID-19.

By Andrew Long September 28, 2020
This story originally appeared on MJBizDaily

Consumers' purchasing patterns involving marijuana have changed noticeably over the past several months in response to the coronavirus crisis.

Marijuana shoppers are spending more money per visit to recreational retail outlets. But they are shopping less often, perhaps for safety, or scheduling, reasons.

Our heat map of weekly adult-use sales changes in four western states show sales recovering through the year, with retailers benefiting from favorable treatment by state governments that allowed them to stay open or provide curbside service. 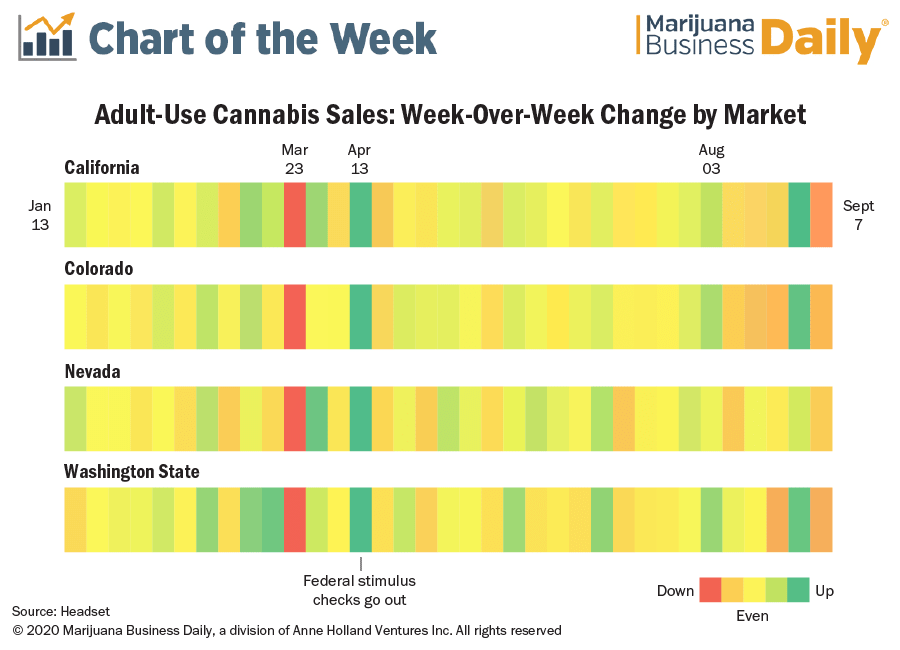 Across the country, in fact, many states declared cannabis companies "essential" businesses.

But there have been roller-coaster weeks in adult-use sales in California, Colorado, Nevada and Washington state, according to data provided by Seattle-based analytics firm Headset.

In the past month, however, a downturn in weekly sales has started to emerge. But it is too early to understand the exact cause.

One possibility: The U.S. government's temporary lifeline to tens of millions of unemployed workers – $600 a week in extra jobless benefits – expired at the end of July.

But up until now, cannabis sales have been relatively recession-resistant.

The National Bureau of Economic Research formally proclaimed the recession began in February, when the coronavirus crisis caused much of the U.S. economy to pause.

Recession or not, marijuana shopping habits have changed markedly since March because of the COVID-19 pandemic, as shown by this chart: 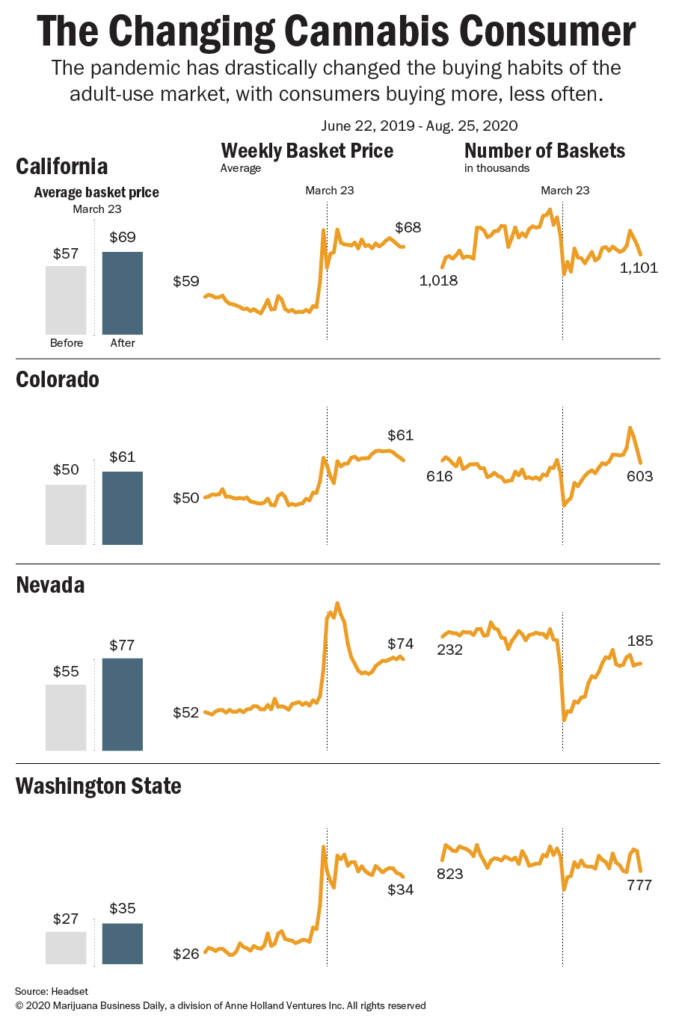 The average amount a consumer purchases at one time – or the average basket size – has increased in California, Colorado, Nevada and Washington state, while at the same time, the number of shopping trips, or baskets, per week have declined.

California and Colorado experienced increases of $10 or more, while Washington state consumers boosted their average purchases by close to $8.

Meanwhile, the number of baskets purchased per week has started to improve since the record lows recorded in March.

Colorado recorded an estimated 362,000 baskets for the week of March 23, the lowest of the year.

RELATED: Covid-19 Is Changing The Way People Think About Cannabis

A survey of grocery shoppers conducted by the Food Industry Association found that 78% of customers changed where they shop, with 40% shopping at fewer stores and 44% spending more money per visit.

While the markets aren't exactly comparable, the question for cannabis retailers is: Will be is this a temporary, pandemic-induced trend, or have consumers changed their shopping patterns for good?

A Closer Look at the Cannabis Market