What Benefits Do Full-Spectrum Cannabis Extracts Bring? We're About To Tell You

There are so many combinations of cannabinoids, terpenes, and other less popularized elements that make whole-plant therapy the only way to get the most from this medicine.

By Mike Adams October 21, 2020
This story originally appeared on The Fresh Toast

Although there is a lot of talk these days over the therapeutic benefits of marijuana’s non-intoxicating compound cannabidiol (CBD), the truth is that some of the best medicine derived from the cannabis plant includes all of its components. There are so many combinations of cannabinoids, terpenes and other less popularized elements that make whole-plant therapy the only way to get the most from this medicine.

When it comes to cannabis extracts, the term “full-spectrum” is an important one to remember. Normal extractions are known to sift out certain components, which can leave the finished product missing the depth present while in plant form. So a customer might get his or her hands on some highly potent shatter, which can have well over 50% THC, only to lose flavor and other crucial aspects. In the world of full-spectrum extracts, the chemist works to bring the plant’s exact profile to the resin.

To truly understand the importance of full-spectrum, it is first necessary to get a grip on this thing the cannabis industry refers to as “the entourage effect.” Simply put, the cannabis plant consists of more than 80 cannabinoids, a variety of terpenes, flavonoids, etc. that all work in synergy to bring the plant’s unique therapeutic qualities to life. 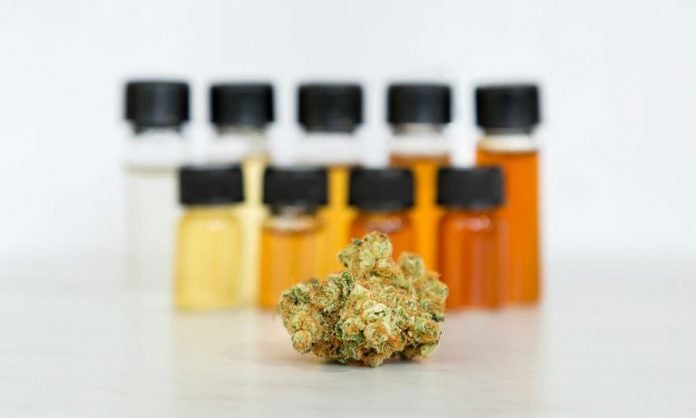 Research has shown that whole plant medicine is more effective than CBD-only extracts when it comes to the treatment of health conditions, specifically pain and inflammation. It’s not that CBD alone doesn’t have healing potential, but the cannabinoid is somewhat limited without the presence of the plant’s other components.

Think of the entourage effect in terms of a musical group. The guitar player by himself might produce an effect that generates a certain feeling in an individual. But when combined with the bass, drums and vocals, that’s when the magic really happens.

It’s easy to get confused and overwhelmed when searching out extracts for their medicinal function. Right now, CBD is the rock star cannabinoid that, in some cases, even outshines marijuana’s psychoactive compound THC. But while the media talks mostly in terms of CBD when telling success stories involving children with epilepsy, they sometimes fail to inform the audience that many of these sick kids are actually medicating with whole plant extracts — they are just derived from CBD-dominant strains.

RELATED: Report Shows Extracts Continue To Be Most Popular Among Cannabis Consumers

“They’re not telling the whole truth,” said Jason David, whose son Jayden has been using medical marijuana to combat his seizures since 2011. “There’s no way possible that all these children in Colorado could get seizure control and get off all their medications without using different ratios and adding THC and THCA. Charlotte’s Web can work great in the beginning but it’s impossible to get off all the medications and go through benzo withdrawals without being able to play with the THC ratios. ”

It can be difficult to track down actual full-spectrum cannabis extracts. This is mainly because the process to develop these kinds of products is so extensive that only those well versed in mad science can attack the job without turning it into a spectacle. However, if a retailer is selling full-spectrum products, most of them will have the paperwork to prove they are legit. Ask for the documentation – they’ll be happy to share it with you.

Will Cannabis Exposure In Young People Cause Adult Psychosis Later?

There Are Still Plenty of Untapped Opportunities in Cannabis

Best US Marijuana Stocks To Buy This Week? 2 To Watch On The Nasdaq Right Now