Over in Scotland Yard, officers nicknamed Commander Julian Bennett "Sacker" for the number of officers he fired for misconduct, including smoking weed. Now he has been sacked from the force for allegedly using medical marijuana.

Officer Bennett leads the Metropolitan Police on criminal justice, including heading up the force's drug strategy and misconduct hearings. After sources tipped off the police about Bennet taking drugs himself, they requested that he take a drug test. He refused and was promptly suspended. 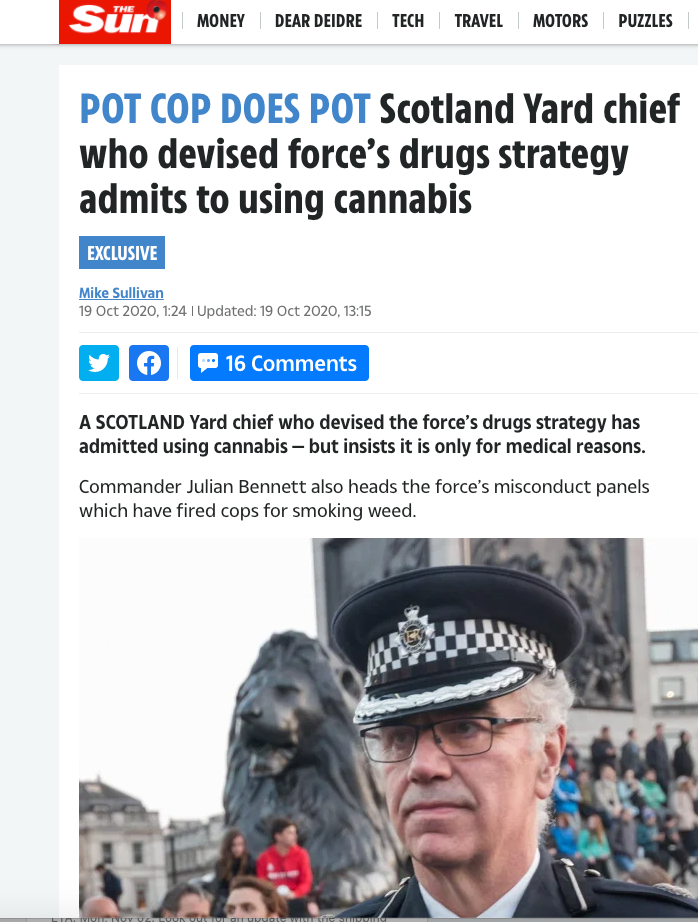 Now, Benett admits to using cannabis, but strictly for health reasons. A source told British tabloid The Sun, “He has fired officers for using cannabis. He now accepts he uses the drug, albeit for medical reasons.”

Bennett claims he has done nothing wrong. Medical cannabis has been legal in the UK since last November. But this doesn't erase his long record of coming down hard on other officers using cannabis. According to The Sun, who calls Bennett the Pot Cop,  "In 2018, he wrote the Metropolitan Police's drug strategy from 2017 to 2021 – which was titled 'Dealing with the impact of drugs on communities'. The strategy set out the force's plans to raise 'awareness of the dangers of drug misuse'.

Commander Bennett could face a disciplinary hearing and potentially be dismissed from the job he's had since 1977.

Related: Hemp vs. Marijuana: Why Can't Cops Tell Them Apart?

The DEA Plans To Burn Enormous Amounts Of Weed In Arizona

Devil's Lettuce? Love Nuggets? The DEA Has Some Pretty Creative Names for Marijuana

A California Company Believes It Has Invented a Viable Marijuana Breathalyzer