Cannabis Isn't Just an Industry. It's a Global Economy

Like every economy, there will be emerging sectors and sub-industries within those sectors

By Ross O'Brien December 16, 2020
Opinions expressed by Entrepreneur contributors are their own.

For all its challenges, 2020 was a good year for cannabis. We saw an ushering in of another wave of pro-cannabis legislation in the U.S., and the UN’s vote to reschedule cannabis facilitated the global easing of restrictions on cannabis for therapeutic and medicinal use.

Going forward, we can expect to see ongoing pro-cannabis legislation, which will open up local and state-level revenues and generate a much-needed source of income to support the massive stimulus programs.

In January, just before it was clear that 2020 would be a year like no other, I published Cannabis Capital, the first book on cannabis venture capital. I wanted to provide a resource for entrepreneurs to help unpackage the nuances of raising capital as many of the founders who were approaching us for investment had not been through the process before. As research for the book expanded, it became obvious that by defining cannabis as an industry, investors and entrepreneurs alike were unintentionally imposing constraints on their interactions. The idea of the cannabis industry seemed to mean something different to everyone and was the source of a lot of conflict and misunderstandings.

In response to this, it occurred to me that cannabis is more than just an industry. It is a global economy. The following is an excerpt from the book where the “Cannabis Economy” was first defined. As we look ahead to 2021 and beyond, it seems more relevant than ever to embrace the principles of the Cannabis Economy:

If we agree that cannabis will be part of our communities for the foreseeable future, we should move beyond debating the merits of embracing the Cannabis Economy. Instead, those operating within the Cannabis Economy should transition to the conversations we should be focused on, such as how to responsibly open up the banking system to cannabis companies. Investors and entrepreneurs should move beyond debating differing views of an industry and focus on discussing the merits of the business and investment opportunity. In doing so, we can enhance the speed at which access and opportunities in cannabis expand in the years ahead. So too can the global community build on the foundation of this new macroeconomy, for everyone’s benefit.

What is the Cannabis Economy?

An “economy” can be defined as a system of inter-related production and consumption activities converting resources into wealth through systems of trade.  Economies are then segmented into sectors and industries within those sectors.  We can then adopt this definition and identify The Cannabis Economy as:

“A global system for exchange of goods and services facilitating cannabis enabled commerce, education and policy.”

The global introduction of this new resource is so widely applicable that it is impossible to narrow down cannabis to one ‘industry”. When viewed as an economy, the benefit to entrepreneurs is the clarity this provides in defining their ventures not in terms of being a business in the cannabis industry, but rather in the context of being in an industry that is part of (or will be part of) the global cannabis economy. The concept of the cannabis economy forms the basis for entrepreneurs and investors to communicate through mutually defined and agreed perspective. This foundational concept allows the discussions to move away from the “cannabis industry”, to the “industry of cannabis” and from there all the relevant business discussions that need to be had will flow through a shared lens

An industry is typically defined by identifying a group of companies that conduct their primary activities within the same primary business activity. These companies are typically classified by their main source of revenue. The system used in North America to classify businesses is called the North American Industry Classification System, or “NAICS,” which uses a code system to identify sectors and industries within the overall economy.

If you take the airline industry as an example, the companies that operate commercial airlines are classified within the primary “Transportation and Warehousing” sector. Within that sector, categories are defined further that include “Scheduled Passenger Air Transportation” (NAICS Code 48111) that includes the companies such as American Airlines Group, Inc. whose primary business function is to provide air transportation for passengers or freight.

If you look more closely at American Airlines, they categorize their core sources of revenue as main and regional passenger ticket sales, cargo and “other”. In this “other” category is where they capture revenues generated from their loyalty and frequent flyer programs which can be as much as 12% of revenues. Selling these programs such as credit cards is arguably one of the most profitable sources of revenue for the company. Would you consider American to be an airline or a credit card company?  Who is their customer?

In the chart below, we apply a traditional hierarchy for defining the sectors and industries within the global Cannabis Economy. Within each sector, we can group together the companies that will make up an explicit industry. These are the companies that have a common source of revenue and business activity. 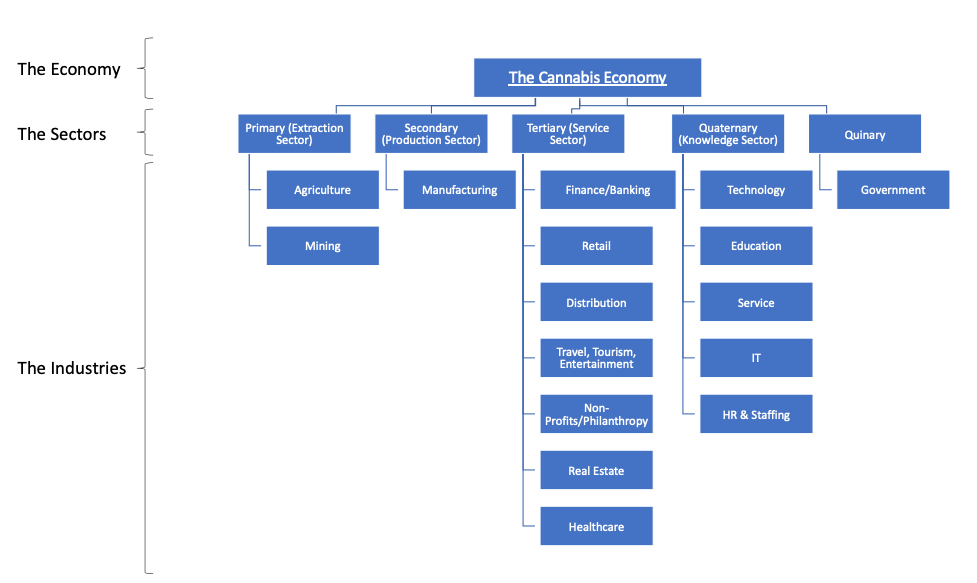 Now that we have a series of identified industries, it becomes obvious that none of these industries are in fact new, but rather are just now being impacted and adapting to the introduction of access to cannabis.  Where does your company operate?  Is your core expertise in understanding cannabis either technically, from a regulatory and compliance perspective, philosophically, or do you otherwise have expertise within that sector and industry independent of a working knowledge of cannabis?

A foundational approach to business is to not fall into the trap of throwing out best practices for the sake of rushing to defining cannabis as something separate from the industries it is impacting.  You should avoid assuming that experience in other industries won’t bring value to a cannabis company, this will be addressed in more detail in Chapter 4 Cannabis Entrepreneurship, as leveraging historical successes in non-cannabis industries will in fact indicate a high probably of success in your venture.  So don’t be in a rush to throw out entrepreneurial disciplines and experiences under the assumption that cannabis businesses can’t be defined in a traditional sense.

When participants in an emerging sector rush forward without taking the time to identify the foundational elements, markets become temporarily inflated. Irrational exuberance of public investors is a likely predictor that many companies will ultimately fail, and investors will lose their capital.  This is true across all industries and we should not expect cannabis to be any different. One way to manage through this evolution is to align around the cannabis economy and the growth prospects for cannabis companies within the industries they operate within.

Every aspect of managing a business should be informed by a clear understanding of the industry a company operates within. This frames sales and marketing strategies, pricing and product development, supply chain and infrastructure, partners and competitors and complying with the related rules and regulations. These are the inputs to any well thought out business plan, and throughout this book the concept will be repeated that it is the entrepreneur’s mission first to build a great business and then adapt that model to a core cannabis strategy.