This Is Why Cannabis Will Lead America's Economic Recovery

The industry can help bridge the economic gaps.

By Maryam Mirnateghi January 21, 2021
Opinions expressed by Entrepreneur contributors are their own.

Walking through the streets of downtown Seattle, I struggle to get used to the fact that the drab gray, one-bedroom loft located above the Occidental Square coffee shop I frequent rents for $4,000 per month. I struggle to come to grips with the knowledge that my fiance and I could easily sell our home in West Seattle today, move to any state in the south or the midwest and buy a 7-bedroom, 4,000-square foot mansion, on a lake, for the same price.

How is that possible?

The state of Washington’s economy is robust. So is the economy of California’s with a GDP ranked 5th in the world, ahead of India and the UK! New York is ranked 12th, ahead of Canada and Russia. But the states in the middle of the U.S., such as Kansas and Missouri, or those in the south like Tennessee and Mississippi, are struggling to provide their citizens with basic, sustainable employment opportunities. If you were to study a US map overlaid with financial data for each state it shows the United States in a rapid collapse from the middle, which from my perspective is not acceptable, nor sustainable. 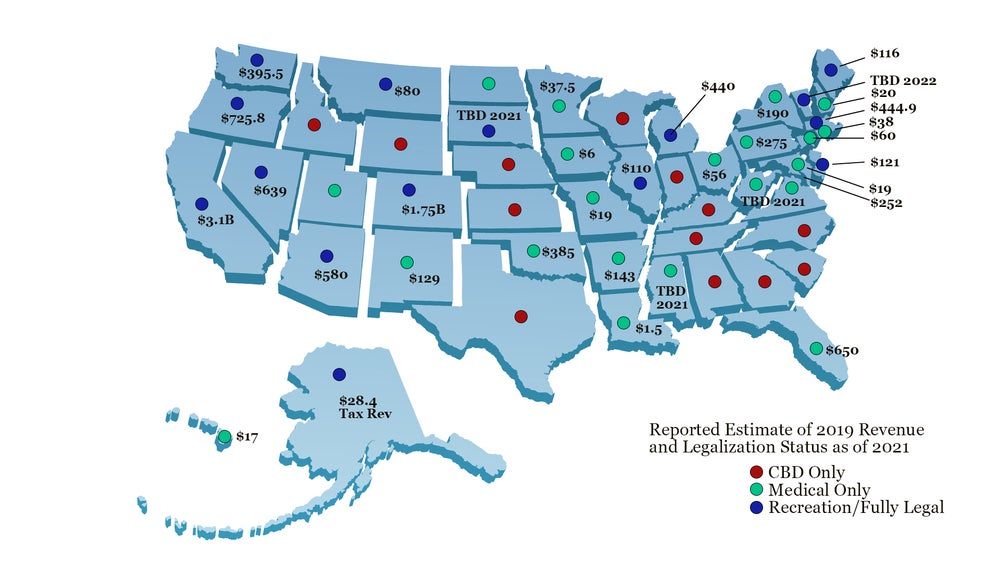 There are three American industries, however, that are poised to bridge this economic gap: technology, renewable energy, and cannabis. Of those three, the cannabis industry should be the leader. Why? The opportunities the cannabis industry presents to middle America is much more attractive than that presented by tech. Working in cannabis doesn't require a college MIS degree and therefore presents a much lower barrier for entry. For example, budtenders in Seattle make good money, own a ton of customer respect, and are treated like influencers. They don’t need college to understand the cannabis plant.

Cannabis retailers and producers have also been declared essential businesses during a pandemic that has shuttered most small businesses, providing a very secure living for cannabis-related business owners and workers. For these two reasons, the cannabis industry has the power to create deeper roots much faster than tech or renewable energy.

Plus, as an emerging industry, it is kicking butt fiscally. Take a look at just the West Coast:

There are twelve other states where cannabis is fully legal, 18 states where medical marijuana is legal, and the remaining states have either decriminalized marijuana or sell CBD only. That leaves only six states left in America where marijuana is illegal, including Tennessee which has the highest unemployment rate in America at 7.4 percent, according to the US Bureau of Labor Statistics. If Tennessee simply followed Nevada’s lead in legalizing cannabis, I bet they could decrease that unemployment rate overnight.

If you ever played any team sports (I played basketball in high school) then you have been schooled on the concept: "The team is only as strong as its weakest link!" Am I right? Good players on good teams work with the worst players on their team to help them get better and to bring them up to speed. On bad teams, the good players ignore the bad players and keep the ball to themselves. It is a losing strategy that builds self-centered behavior. Why can't we look at our country as a team?

America needs its business leaders to step up today, to engage with each other in creating a concrete vision and a common goal - bridging the economic gap. I, for one, would love to be part of a team like that. In fact, here are a few ideas I would bring to the table right away:

Let's figure out which American companies are willing to move inland right now. How can the government incentivize (see step three below) those moves without sacrificing tax revenue?

Step 2: Support startups and small businesses, instead of huge companies.

Small, successful businesses would be incentivized by the federal government to move to, or also open for business inland.

Step 3: Build for the Future

Those companies that take on the challenge of moving inland and find success should then be encouraged and incentivized to help build out the future of those communities, along with the support of the American government. This could lead to education programs tailored to the industries that prevail in those communities and give young people a real roadmap and foundation for future success. This step will involve the government and the industry working together with local politicians, school districts, and area universities.

That is where I would start, but then any diverse team devoted to creating this bridge will bring a lot more ideas to the table than I just laid out. 2020 proved that the cannabis industry is not only an essential business but a potential superhero for what ails our fellow Americans in the south and the middle of the country— a lack of fiscal opportunity and security.