A Majority of Pet CBD Products Are Mislabled

Study finds that out of 55 tested pet products, 31 products contained the wrong amount of CBD. Many also contained no THC despite being labeled as full-spectrum CBD.

By Gleb Oleinik May 26, 2021
This story originally appeared on Leaf Report

You’re far more likely to find a high-quality CBD product today than several years ago. But there’s still room to improve. One lingering problem is that many products don’t contain the correct amount of CBD.

We discovered as much by sending dozens of CBD products for independent testing at Canalysis Laboratories, a Las Vegas-based cannabis testing lab. So far, we’ve done in-depth investigations of CBD oils, drinks, edibles, and topicals.

In this report, we’re going to look at CBD pet products, a category that’s been steadily growing in popularity. We sent 55 pet products to be independently tested for their cannabinoid content. Here’s what we found. 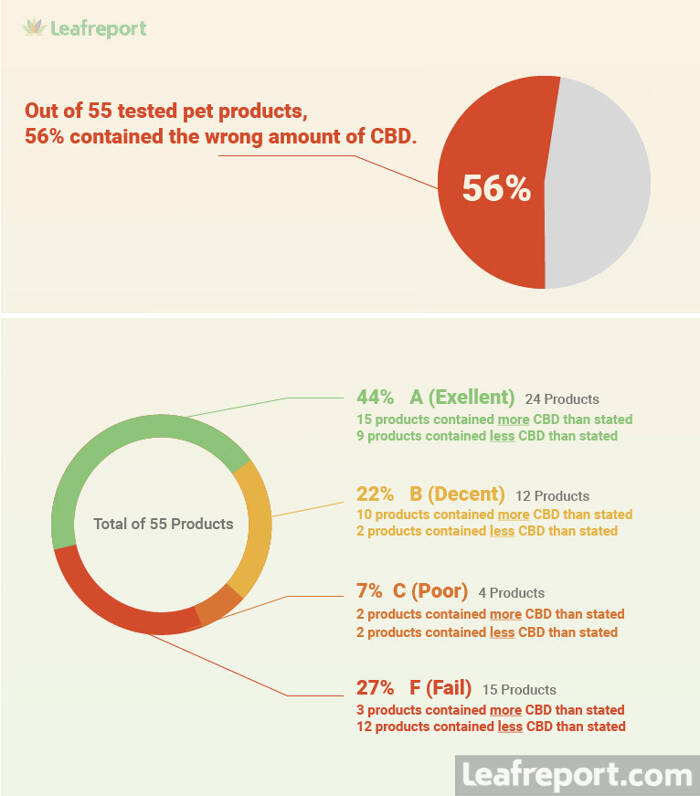 We measured the accuracy of CBD pet products by comparing how much CBD they should have to the amount shown on the third-party lab test reports.

While some variation is expected from a natural product like hemp-derived CBD, it should still be within reasonable levels. Industry experts recommend that cannabis products should contain cannabinoid levels that are within 10% of the advertised amount.

In other words, CBD products should contain anywhere from 90 percent to 110 percent of the amount stated on the label to be considered accurate.

Using this 10 percent cutoff, we assigned CBD pet products one of four ratings to represent their accuracy:

Third-party tests are done by an independent lab to confirm the safety and potency of a CBD product.

These tests are important when shopping for CBD because some products have incorrect CBD levels or carry contaminants.

The most important third-party test is called a cannabinoid profile or potency test. It measures the amount of CBD and other cannabinoids in a product.

This is the test we order for our independent reports. Verifying the potency of a CBD product is important for several reasons:

We bought 55 CBD pet products and sent them to the cannabis testing lab Canalysis, located in Las Vegas. The lab technicians tested the products and recorded the results in documents called certificates of analysis (CoAs).

Next, we compared the amount of CBD shown on the CoAs to the advertised CBD content of each product. We also looked at what other cannabinoids were detected by the tests.

To give you an example, if a company sold a pet CBD oil that should contain 300 mg of CBD but the tests only showed 200 mg, that means it contained 33 percent less CBD than claimed.

This poor result would receive our F rating since you’d be getting much less CBD than you paid for.

How to Read CoAs

Most CBD companies publish third-party CoAs directly on their website. This way, it’s easy for you to confirm that a CBD product is safe, reliable, and effective before buying it.

Reading a CoA may seem difficult because of the scientific jargon and abbreviations, but it’s not that complicated. The main thing to look for is the section called “cannabinoids,” “cannabinoid profile,” “potency,” or something similar.

Here, you’ll see columns and graphs with names of cannabinoids such as CBD, THC, and others, and their amounts in percentages or milligrams (mg) per milliliter (ml), gram, serving, unit, or the whole container.

If you want more info on reading CoAs, check out our detailed guide.

Check out our list of the best CBD pet products, based on criteria such as price, company reputation, and customer service.You can find a summary of the test results for the 55 pet products that we sent to Canalysis here.