From states to countries to retreats: Where you can most likely use the entheogenic brew.

Ayahuasca has been used by the indigenous peoples of the Amazon in shamanistic rituals for centuries. But, the entheogenic brew’s storied history and continued use doesn’t necessarily make it legal. Sure, there are some places where ayahuasca is legal (or at the very least decriminalized), but more often than not ayahuasca laws are not well defined. The legal status of ayahuasca is a complex topic, and folks looking to tap into ayahuasca’s often profound and spiritual effects are likely on shaky legal grounds. Legislation can vary significantly from country to country and even in the US, laws aren’t consistent across all jurisdictions.

So, let’s dig into what you need to know about the legality of ayahuasca, starting here at home in the States.

RELATED: A Crash Course On Opportunities In Psychedelic Medicine

Is ayahuasca legal in the U.S.?

While some American cities have begun to move towards more progressive psychedelic legislation, for the most part preparing, possessing, and consuming ayahuasca remains illegal in the US.

Ayahuasca’s most famous psychoactive compound is N,N-Dimethyltryptamine, or DMT as it is more commonly called. DMT is an intense hallucinogenic that often produces profound and sometimes unsettling audio-visual experiences. It is the presence of DMT that causes ayahuasca’s legal troubles. DMT remains a Schedule I substance, which puts it in the same federal legal standing as cannabis, heroin, and LSD. The penalties for getting caught with DMT will depend upon your state of residence, but federal law says simple possession of a controlled substance is subject to a $1,000 fine and one year behind bars for first time offenders. However, since making a brew containing DMT like ayahuasca may be considered manufacturing of a Schedule I substance, you could see as much as a 20-year prison sentence, according to ICEERS.

Another thing that makes navigating American ayahuasca law challenging is that the plant ingredients used to make the brew are unregulated in the US. Banisteriopsis caapi and Psychotria viridis are the two most common ingredients in any ayahuasca brew, neither of which are explicitly illegal plants in the US. However, as the activist group Decriminalize Nature told Doubleblind in a statement, that doesn’t mean they are safe to have. The presence of DMT in B. caapi, and the plant’s known uses as components in ayahuasca means you still may face legal trouble for possessing them.

But, just like how the legal status of cannabis can vary drastically from state to state and even city to city within a given state, so too can ayahuasca laws.

Is it legal in my city or state?

Right now, ayahuasca has only been decriminalized in five US cities and one state.

Well, maybe, but probably not. So far only a small handful of local jurisdictions have moved towards more progressive ayahuasca legislation. Right now, ayahuasca has only been decriminalized in one state and a handful of local jurisdictions: Oakland, and Santa Cruz, CA; Ann Arbor, and Washtenaw County, MI; Washington, DC; and Somerville, Cambridge, and Northampton, MA; as well as the state of Oregon. Cannabis-style legalization of the commercial production and sale of ayahuasca has yet to touch down in the US.

On November 3, 2020 Oregon made history as the first US state to decriminalize the use of all drugs when voters approved Measure 110. Under the new legislation, which came into effect on February 1, 2021, possessing or consuming small amounts of illegal drugs is no longer a criminal offense in the state. Instead of harsh prison sentences, individuals found to be in possession of small amounts of a controlled substance will be subject to either a $100 fine or a trip to an addictions recovery center, offender’s choice.

These regulations don’t make ayahuasca legal in Oregon, but you can safely assume you won’t face jail time or exorbitant fines if you do choose to drink ayahuasca at home. Be careful if you are planning an at-home ayahuasca ceremony though. Possession of larger amounts of controlled substances is still a misdemeanor offence, and the sale of illicit drugs remains illegal as well.

Denver gets a few points for being the first American city to decriminalize shrooms, but Oakland, California was the first to decriminalize the use of ayahuasca. The Oakland City Council unanimously passes a proposal in June, 2019 decriminalizing the use of entheogenic plants, a category that includes ayahuasca brew, psilocybin mushrooms and iboga, among other plants. The resolution states law enforcement will not prioritize the arrest of individuals who consume the substances, and the county should refrain from prosecuting folks if they are arrested.

The new regulation does not legalize the sale or distribution of ayahuasca and other entheogenic substances. So, while you’re unlikely to face any penalties for drinking ayahuasca, getting caught brewing a batch of ayahuasca to be distributed at a group ceremony is still a punishable offense.

Santa Cruz followed Oakland’s lead six months later, when their own city council unanimously passed a resolution decriminalizing ayahuasca and other entheogenic plants in January 2020. The Santa Cruz resolution is broadly similar to the one passed in Oakland. Ayahuasca and other entheogens aren’t legal in Santa Cruz per se, but the resolution renders them as the lowest priority for law enforcement. As in Oakland, the sale and distribution of substances like ayahuasca remains illegal.

In September 2020, the city council in Ann Arbor unanimously passed a proposal that saw the decriminalization of all naturally occurring entheogens. While the Ann Arbor resolution is similar to both Oakland’s and Santa Cruz’s, there are a few details that may make Ann Arbor’s even more progressive: Individuals are expressly protected when cultivating and distributing substances like ayahuasca under the Ann Arbor resolution, a divergence from its Oakland and Santa Cruz counterparts.

“The investigation and arrest of persons for planting, cultivating, purchasing, transporting, distributing, engaging in practices with, or possessing entheogenic plants or plant compounds which are on the Federal Schedule I list shall be the lowest law enforcement priority for the City of Ann Arbor,” the resolution reads.

Following the passing of the resolution in Ann Arbour, the Prosecuting Attorney of Washtenaw County chose to adopt the policy as well. This means that the use, growth, possession, and distribution of entheogenic plants is now the lowest law enforcement priority across the entire county. And much like in Ann Arbour, this means brewing and consuming ayahuasca is pretty safe in Washtenaw County.

Washington residents voted to decriminalize entheogenic plants in November 2020 when Initiative 81 appeared on the city’s ballot. The new policy in Washington is effectively the same as what has been seen in Michigan and California. Residents can grow and consume their own entheogens, but sale remains prohibited. And, much like in other jurisdictions with similar policies, ayahuasca brew, as a combination of several entheogenic plants, will fall under the new protections.

Rounding out the jurisdictions that have passed similar psychedelic decriminalization are a trio of cities in Massachusetts. Sommerville was the first in the Bay State to decriminalize ayahuasca and other entheogens. The Sommerville city council passed the bill in January, 2021. Cambridge followed shortly after, passing their own legislation in February. And most recently, Northampton implemented their own resolution in April. The new regulations in these Massachusetts cities are similar to what has been seen elsewhere. Residents can now own, grow, and consume entheogenic substances like ayahuasca without fear of legal repercussions. Sale remains restricted in each jurisdiction.

Michigan may be plotting it’s own path towards statewide psychedelics decriminalization as well. Decriminalize Nature tells Doubleblind they are actively working with legislators in the state and the formal introduction of a psychedelics reform bill is planned for the near future.

RELATED: Native Tribes Should Have More Say in the Psychedelic Movement

Is it legal for religious use?

Actually, yes, the use of ayahuasca by certain churches in the US is protected under the Religious Freedom Restoration Act. The most noteworthy organization to receive this protection is the Brazilian church União do Vegetal (UDV). Back in 2006, the United States Supreme Court ruled in favor of the UDV on a case that protected the church from criminal prosecution for their sacramental use of ayahuasca. Effectively, this ruling made ayahuasca legal for members of UDV across the country.

The ruling is not binding on states, however. This means that local law enforcement may still arrest churchgoers for the use of ayahuasca. Despite this, the Supreme Court decision legalizing ayahuasca for the UDV remains the de facto stance in most jurisdictions. 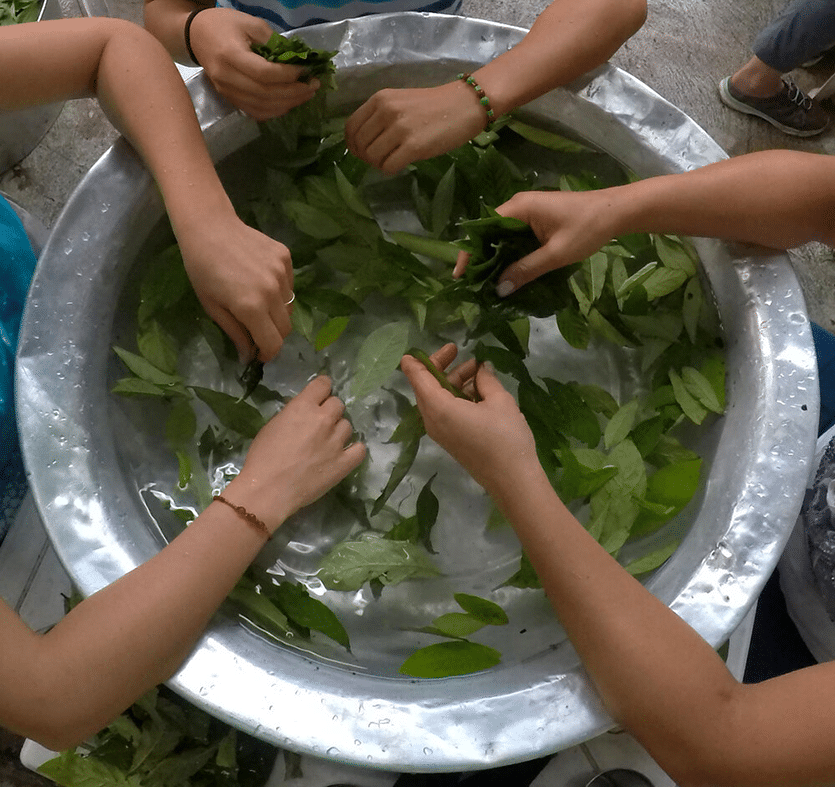 The use of ayahuasca by certain churches in the US is protected under the Religious Freedom Restoration Act. | Via União do Vegetal USA

It’s also likely you’ve read viral stories about other “legal ayahuasca churches” cropping up in the US—the most infamous of which was a Washington-based organization, Ayahuasca Healings, claiming to be the “first legal ayahuasca church in America” back in 2015. Despite their bold claims, Ayahuasca Healings had no protections for their use of ayahuasca and was shut down by the DEA expeditiously. All this is to say you should exercise a healthy dose of skepticism if an organization not associated with the UDV or Santo Daime claims to be offering legal ayahuasca ceremonies.

Is it legal internationally?

Broadly speaking, no, ayahuasca isn’t legal internationally. The UN 1971 Convention of Psychotropic Substances lists DMT as a controlled substance. And while ayahuasca specifically doesn’t fall under the purview of the 1971 Convention, the International Narcotics Control Board has urged member states to “control” ayahuasca.

Most of the countries with the more progressive ayahuasca legislation are located within the Amazon region of South America. Peru and Brazil in particular are well known for having legalized ayahuasca. Both Peru and Brazil have become popular destinations for ayahuasca tourism in recent years, and both are home to several legal ayahuasca retreat centers.

Retreats in the U.S. or Europe

The fact that the Amazon jungle is really the only place where individuals can attend a legal and well-managed ayahuasca retreat puts traditional ayahuasca ceremonies well out of reach of most Americans.In Europe, the legal situation of ayahuasca is much like it is in the United States. Portugal decriminalized all drugs in 2001, making it the safest place in Europe to drink ayahuasca from a legal standpoint. Countries like the Netherlands and Spain (where the UDV and Santo Daime are active) have historically taken lax approaches to ayahuasca prosecution. Despite this, ayahuasca is not officially legal or decriminalized in either Spain or the Netherlands, and folks should exercise caution if choosing to partake while in-country. Broadly speaking however, the presence of DMT in ayahuasca makes ayahuasca’s legal status across Europe tenuous at the best of times.

Here's What Happened When a Bunch of Zen Monks Took Mushrooms

TV Series Being Developed About LA's Growing Passion For Tripping

Can Magic Mushrooms and Ecstasy Be Used to Treat Autism Spectrum Disorders?