By Nicolas Chahine August 31, 2021
This story originally appeared on InvestorPlace

We can’t discuss Tilray (NASDAQ:TLRY) without leaving the door open for a super spike. GameStop (NYSE:GME) did not invent the phenomenon, TLRY stock did it years ago. While this alone is not an investment thesis, it serves as a reminder that it’s OK to own shares now. I don’t condone going all in now, but a starter position is in order. The stock is relatively cheap at only 10 times its sales. Value is finally a viable argument for owning it.

Last year when the U.S. elections momentum suggested a Biden victory, certain investment themes took flight. One of those was the cannabis sector expecting that the new team would legalize pot. So far only 30% of the states have taken the initiative. But still no official word from the administration. Dozens more could follow and therein lies the potential.

Cannabis companies like Tilray are doing this well while bound by legal constraints. As more shackles come loose, more opportunities would present themselves. This would bring incremental distribution areas, and maybe help streamline processes. There must be a ton of inefficiencies that would disappear if they could do business freely. Current legal stop gaps must be taxing. 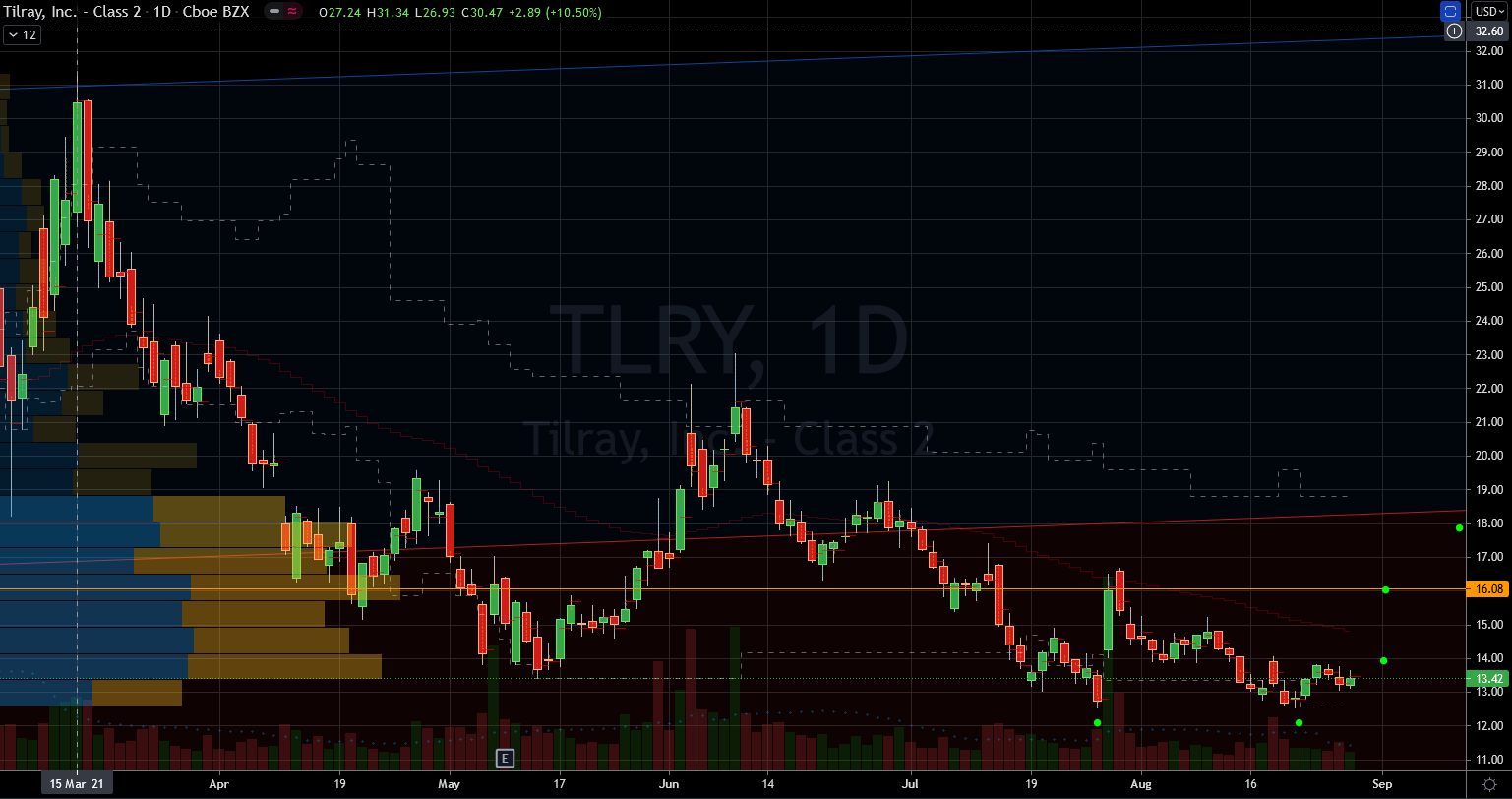 While it is great for TLRY stock that states are allowing them to operate, they need the big one. The White House decision would be a game changer. Sentiment on the sector would instantly flip on Wall Street. Investors are great at overreacting to headlines, and that would ignite an investment fire. While there is no specific reason to panic-buy the shares now, it is reasonable to own some.

I am not a perma-bull on Tilray, in fact I’ve cautioned against it often. I’ve been consistent in trying to avoid chasing it at high levels like earlier this year. Pot and other meme stocks went parabolic before crashing back to earth. Perhaps they were coming down from the elections high. Whatever it was, the situation has dissipated and the action has normalized a bit now.

Investing in cannabis is a viable thesis for many other reasons. There are medicinal uses for it, but also a whole commercial side as well. We haven’t even scratched the surface there. Social gathering opportunities will likely be huge. This will include edibles and drinkables. This concept is not new, it’s just taking time to materialize. There is also the cosmetic application where cannabis can also carve a niche.

In short, the addressable market is vast and we can’t foresee all its branches now. But the first step is still for the government to accept cannabis on a federal level. Currently the White House has its hands full with the situations in Afghanistan and Covid-19. Pot is not a priority, so patience is key.

Tilray Is Taking A Leadership Role

While we wait, investors can use ETFs to cast a sector-wide net. I have shifted my focus from Canopy Growth (NYSE:CGC) to TLRY stock. After their merger with Aphria they seem to have taken the lead. Neither are profitable yet, but they are cheaper now. They have shed much of the froth that they carried three years ago. Value is in the eye of the beholder, and current investors are nine times more realistic than in 2018.

The stock markets broke records on Friday. This makes them vulnerable to draw downs from here. If that happens then Tilray could also suffer through no fault of its own. Currently the stock is trying to find footing from an 80% correction. Where the stock is now has been pivotal since the pandemic started. It is also below its IPO days, so the stock is quite lean. Falling much further from here will take new bearish catalysts. Even then, the bottom below should be shallow. Conversely, TLRY stock has years to deliver on the upside potential to come.

Let’s infuse a bit of realism into the bullish point today. Everything we noted could have also been true a few weeks ago. Meaning it is not an all clear to load up on full positions. The concept is not fool proof in the short term for many reasons. Some are independent of Tilray fundamentals, like the end of the quantitative easing (QE).

On the date of publication, Nicolas Chahine did not have (either directly or indirectly) any positions in the securities mentioned in this article. The opinions expressed in this article are those of the writer, subject to the InvestorPlace.com Publishing Guidelines.

Nicolas Chahine is the managing director of SellSpreads.com.