2 Growth Stocks to Buy on the Dip

Investors should use market volatility to enter positions in fundamentally sound stocks. Two such names are Tesla (TSLA) and Peloton (PTON), and they are worth buying on market weakness based...

Investors should use market volatility to enter positions in fundamentally sound stocks. Two such names are Tesla (TSLA) and Peloton (PTON), and they are worth buying on market weakness based on their popularity and product traction.

It’s been a strong start to October thus far for the tech sector, with the Nasdaq-100 Index (QQQ) bouncing sharply from its September lows and extending its year-to-date gain to 19% after a brief pullback. This significant outperformance is despite inflation concerns and the possibility of rate hikes as early as 2023, which could make it more difficult to justify the valuations we’re seeing among high-flying growth names. However, while the market as a whole remains quite expensive, two names remain reasonably valued as long as they can continue to execute on their growth plans. These two names are Tesla (TSLA) and Peloton (PTON), and while they’re not on buy ratings, they are names worth keeping at the top of one’s shopping list if we do see some turbulence in the market. Let’s take a closer look at both names below: 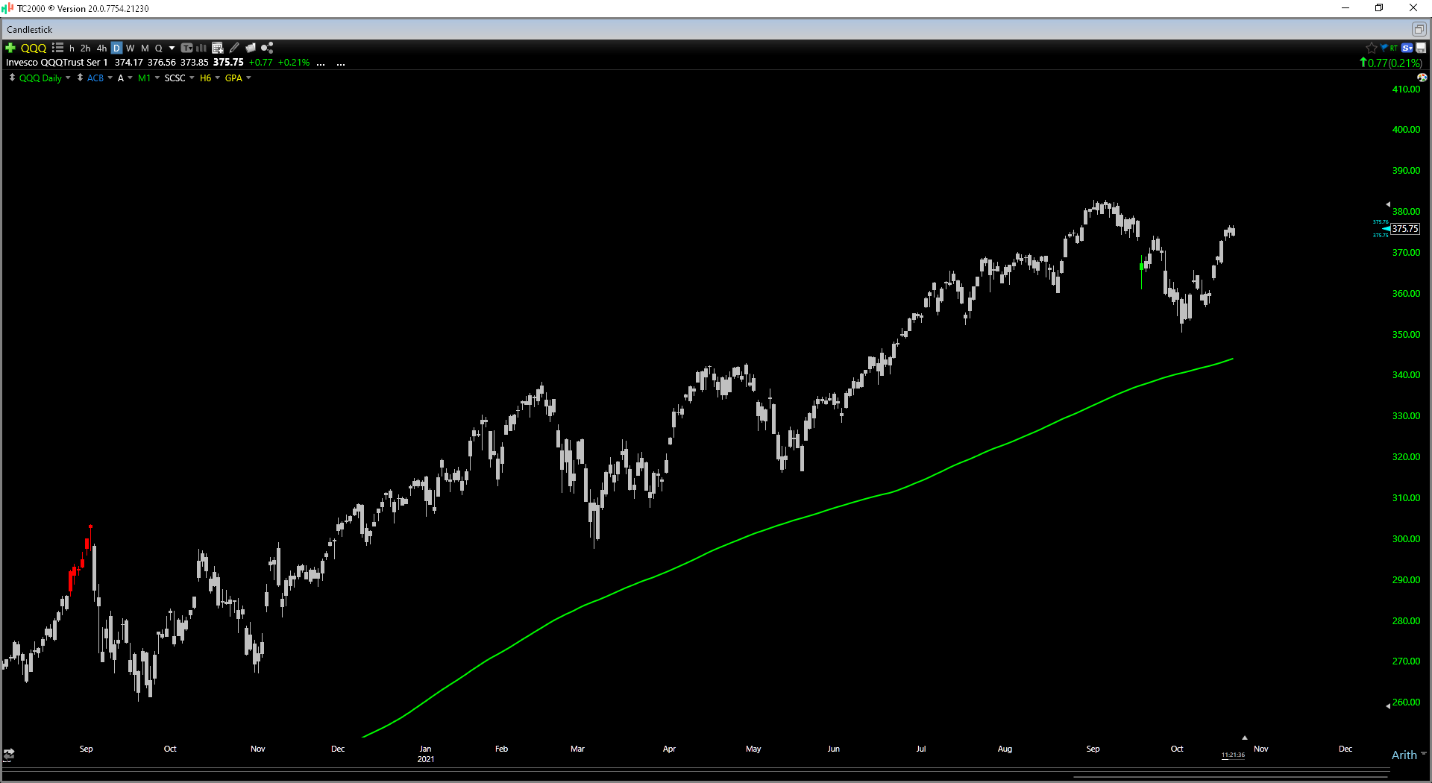 Tesla and Peloton have little in common, with the latter company being a tech-leisure name and the other being an auto manufacturer with industry-leading self-driving technology. However, both companies have performed exceptionally well since the March 2020 lows, with Peloton gaining more than 400% even after its recent correction and Tesla up a whopping 1100%. At current levels, neither name offers a large enough margin of safety, but with the margin expansion profiles each have, and their strong revenue growth rates (50%+ revenue growth rates), I believe both names are buy-the-dip candidates if we do get a sharp sell-off in the coming months. Let’s dig into Tesla a little closer below:

Tesla reported its Q3 2021 results yesterday and smashed analyst estimates, reporting quarterly earnings per share of $1.86, up 145% year-over-year, with revenue coming in at $13.8BB, up 57% year-over-year. These strong results were driven by a beat on delivery estimates and strong margin expansion, with automotive gross margin coming in at 30.5%, or 28.8%, after adjusting for credits. This continued margin expansion is what should drive buttress annual EPS growth over the next few years when combined with increased demand for EVs, which will lead to much higher revenue. As shown in the chart below, the high end of FY2021 annual EPS estimates are now projecting $6.25 in annual EPS for TSLA, translating to ~180% growth year-over-year. I am confident that annual EPS could soar closer to $15.00 by FY2023, which helps to explain how the company is currently commanding such high earnings multiple. This is because at a share price of $889.00, the stock is trading at more than 140x FY2021 earnings estimates.

Suppose TSLA can meet FY2023 annual EPS estimates of $14.85. In that case, the stock does not look that expensive at all, especially if we consider Tesla’s rare attributes as a mega-cap company with meaningful margin expansion, a massive secular trend behind it (EV adoption), and industry-leading annual EPS growth. As it stands, high-growth mega-caps typically receive premium multiples given that there are a limited amount of high-growth options with high liquidity, but in TSLA’s case, the growth rates dwarf that of other mega-cap peers like Netflix (NFLX), Amazon (AMZN), and Microsoft (MSFT). Based on what I believe to be a fair earnings multiple of 70 and FY2023 annual EPS estimates of $14.85, I see a fair value or 18-month target price of $1,040. This translates to a nearly 20% upside from current levels, even after the recent rally.

However, while I currently hold a position in TSLA, the stock is a little extended short-term, rallying well above its short-term trendline that comes in at $790.00 after its attempted multi-month breakout. It’s certainly possible that TSLA could continue to march higher here without a pullback, but with the stock up for its tenth week in a row, I don’t see any way to justify adding new exposure here. Instead, I believe the best course of action is leaving limit bids in the $770.00 - $780.00 area, which should provide strong support if we see a sharp pullback to shake out weak hands. At these levels, Tesla would trade at closer to 50x the high end of FY2023 annual EPS estimates ($14.85) and would offer more of a margin of safety. So, while I think TSLA still has further gas in its tank and the long-term picture remains bullish, I believe the better move is being patient for a dip after the strong rally we’ve seen into the blowout Q3 earnings report. 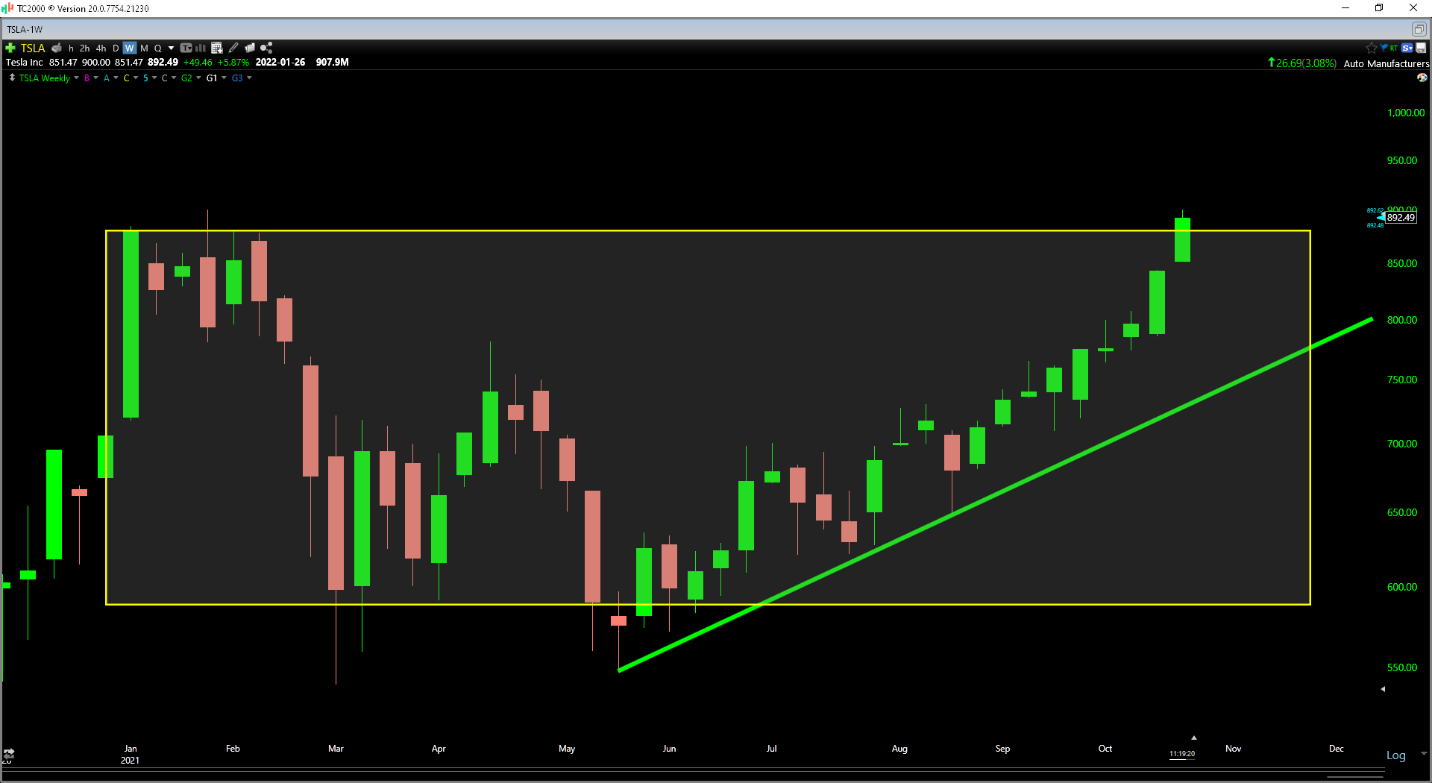 Moving over to Peloton, the stock has had a disappointing year thus far, massively underperforming high-fliers like TSLA and NFLX and currently sitting at a (-) 39% year-to-date return. This poor performance can be attributed to negative recall news earlier this year, after reports of injuries and one death on its Tread+ and Tread treadmill machines. Adding insult to injury, the company cut the price of its bike to $1,495, with a decline in the monthly financing rate as well. However, with the stock declining more than 50% from its highs, a good chunk of the negativity looks to be priced in. This is because the company still has a clear path to profitability by FY2023/FY2024, continues to post strong, with 54% growth in revenue in the year-ago period, and has a very loyal following, with 5.9MM members. It’s worth noting that this 54% revenue growth was despite a sharp increase in vaccination rates and a return to gyms in many jurisdictions, and it lapped 172% revenue growth in the year-ago period. This translates to a market-leading two-year average revenue growth rate of 113%.

If we look at Peloton’s earnings trend, investors are still going to have to wait a few years before the company begins posting positive annual earnings per share, but it should arrive by FY2023/FY2024 based on estimates. Typically, the shift from net losses per share to positive annual EPS opens up growth stories to increased fund ownership, with some growth funds preferring to wait for positive annual EPS before investing. So, this should be a tailwind in the next two years as annual EPS moves closer to profitability from a fund ownership standpoint. Notably, with the negativity and the sharp decline from the highs, PTON’s valuation has improved considerably, dipping from 20x price to sales to start the year to less than 8x price to sales currently. So, while PTON was previously a growth at a lofty price story and a momentum trade, it has since turned into a “growth at a reasonable price” story. 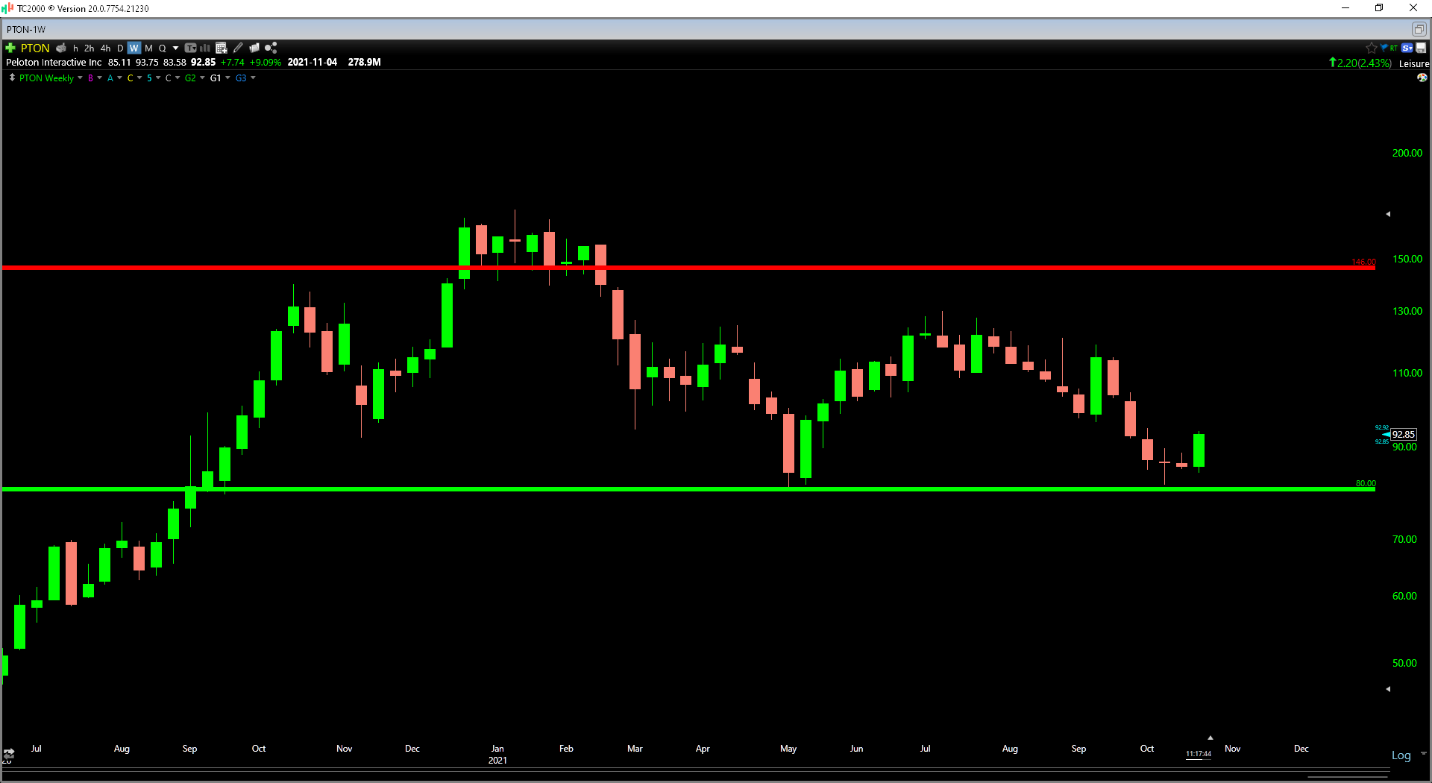 Looking at the chart above, we can see that PTON saw strong buying support during its pullback in April/May, and I would expect the $78.00 - $80.00 level to provide strong support going forward if PTON undercuts this low. Assuming PTON were to re-test or undercut this area, the stock would trade at a more reasonable valuation of ~6.2x sales and closer to 20x FY2025 earnings estimates, which is a decent price to pay for this story. Additionally, with six months in a row of negative reports and downgrades, the story has become hated short-term, and this means that any good news should have a dramatic impact on the share price. In summary, while I am not ready to start a position just yet, I would be watching the $78.00 level closely if we see a pullback here before year-end.

In a market that remains quite expensive, I don’t see any reason to chase high-growth names and add new exposure here. This is because the S&P-500 is currently sitting just shy of a short-term resistance zone, and few stocks are offering a compelling margin of safety. However, it is worth building a shopping list and preparing for future turbulence since market corrections are inevitable. Two names worth considering if we see a deep correction are TSLA, and PTON, and I would view both stocks as low-risk buys from a swing-trading standpoint at $770.00, and $78.00, respectively.

Disclaimer: Taylor Dart is not a Registered Investment Advisor or Financial Planner. This writing is for informational purposes only. It does not constitute an offer to sell, a solicitation to buy, or a recommendation regarding any securities transaction. The information contained in this writing should not be construed as financial or investment advice on any subject matter. Taylor Dart expressly disclaims all liability in respect to actions taken based on any or all of the information on this writing.

Tesla (TSLA) is a part of the Entrepreneur Index, which tracks some of the largest publicly traded companies founded and run by entrepreneurs.

About the Author: Taylor Dart

Taylor has over a decade of investing experience, with a special focus on the precious metals sector. In addition to working with ETFDailyNews, he is a prominent writer on Seeking Alpha. Learn more about Taylor’s background, along with links to his most recent articles.

The post 2 Growth Stocks to Buy on the Dip appeared first on StockNews.com