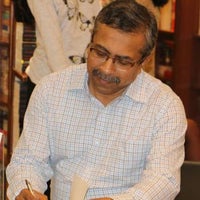 My write-up on Bahrain and its people won the 1st prize in creative writing and was published in the coffee table book, "Best of Bahrain," in 2012. My first book, also a thriller, named "Land of two seas," published in 2015. It is a fiction woven around facts that takes off from a daring air-raid during World War 2, by the Italians, to bomb the oil refinery of Bahrain. The book has been very popular in Bahrain. "Unforeseen: A battle for his daughter's life," is my second novel published in 2018.