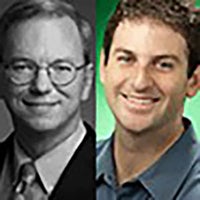 About Eric Schmidt and Jared Cohen

Eric Schmidt and Jared Cohen are the authors of The New Digital Age, reissued in paperback in March 2014. Schmidt is Google's executive chairman. From 2001 to 2011, he served as Google’s CEO. Jared Cohen is the director of Google Ideas and an adjunct senior fellow at the Council on Foreign Relations. Follow Schmidt and Cohen on Twitter.