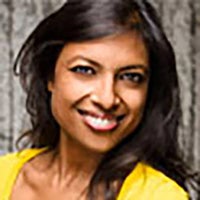 As CEO, Prerna Gupta has overseen the growth of Khush's http://www.khu.sh flagship product, LaDiDa, which has received over 2 million downloads and led the company to profitability. Gupta also produced viral videos for LaDiDa receiving over 100 million views. She studied Economics and Computer Science at Stanford University and worked on marketing strategy at Monitor Group and early-stage deal sourcing at Summit Partners before making the move to entrepreneurship. She was named one of FastCompany's Most Influential Women in Tech 2010.