By Eli McVey
October 24, 2019
This story originally appeared on MJBizDaily

The legalization of recreational cannabis can put a big dent in a state’s pre-existing medical marijuana market.

Patient counts in Colorado, Massachusetts, Nevada and Oregon -- the only states with both an active recreational marijuana industry and a pre-existing MMJ patient database -- have all suffered in the months and years since the launch of an adult-use market in each. 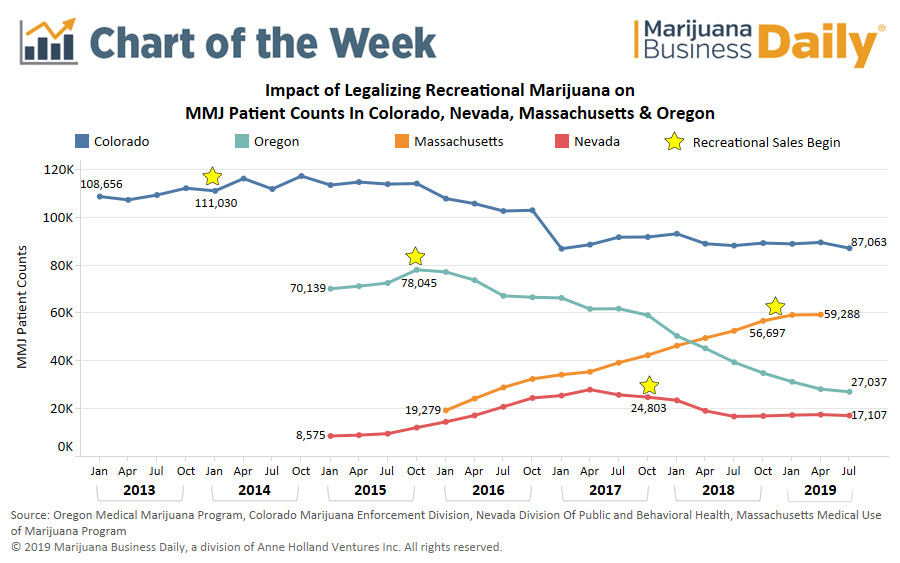 In each state shown in the chart above, MMJ customers pay less in taxes than recreational consumers.

Medical customers pay only the standard sales tax rate, while adult-use consumers pay taxes ranging from 10% in Nevada to 17% in both Massachusetts and Oregon.

Colorado and Nevada also tax adult-use cannabis at the wholesale level, which is indirectly passed on to the consumer in the form of higher prices.

But not all MMJ programs are created equal.

While the number of registered patients in both Colorado and Nevada are down from their pre-recreational legalization highs, from July 2018 to July 2019, patient counts fell just 1% in Colorado and ticked up 2% in Nevada.

By contrast, the number of MMJ patients in Oregon has been in a freefall since adult-use cannabis sales began, down 65% from October 2015 to July 2019.

The difference is likely a function of the high cost of getting an MMJ recommendation, which, in Oregon, stands at $200 annually. Patients in Massachusetts and Nevada pay a $50 annual fee, while patients in Colorado pay only $25 annually.

The latest data shows gains in MMJ patient counts in Massachusetts are decelerating now that recreational cannabis sales are in full swing.

Patients treating chronic and severe conditions that require high-potency products available only to MMJ patients will likely see value in tackling the necessary regulatory hurdles to be included on MMJ roles.

But others might instead opt for the more accessible retail market as prices continue to fall and product selections expand.

With states such as Illinois and Michigan – which both have existing MMJ programs – set to begin adult-use cannabis sales next year and more states poised to legalize recreational marijuana in the coming years, the interplay between medical and adult-use cannabis markets within a single state will be of increasing relevance to businesses and policymakers moving forward.